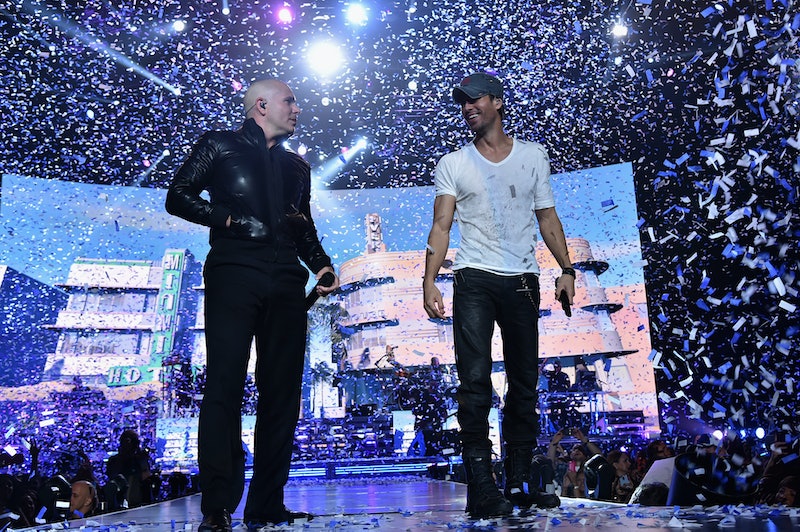 It's New Year's Eve and if you're not out partying, you're probably spending it with friends and family watching Dick Clark's New Year's Rockin' Eve and waiting for the ball drop. Or, if you're like me, you're spending it in a onesie watching Pitbull's New Years Revolution on Fox with a bottle of champagne. Sure, Dick Clark's Rockin' Eve is the classic NYE Party to watch, but the Pitbull party is the next best thing to watch because it's Pitbull and something outrageous/hilarious/downright insane is bound to happen. Well, we're in luck. Because not only did Pitbull's backup dancers The Most Bad Ones arrive to the party by driving through the Atlantic Ocean in Fiats, — seriously, that was downright ridiculous — but Mr. 305 just earned himself a key to his beloved city of Miami.

The mayor of Miami himself showed up to the party to shamelessly promote the tourism business and present our favorite bald singer a key to his beautiful city. Now it surprises me that Mr. 305 himself doesn't already hold a key to his namesake city, but it doesn't surprise me that the key he received gains him access to all the hottest clubs, bars, restaurants, etc, not important buildings like the City Hall. Question, though. As Pitbull wouldn't he already have access to all these things? Like can't you just walk into a club and say "Hey, I'm Pitbull" and they'll give you whatever you want? Since I'll never be able to walk into a club and ask that I guess I'll never know. But at least he now has a key for backup.

Now that Pitbull has access to the Pineapple, I'm sure plenty more hijinx will happen throughout the night. Will he bring the party to the bars and clubs he now has access to? Will they drop a big pineapple at midnight? Will Pitbull do a wadrobe change into his legendary see-through linen pants? Only time will tell, but I'm secretly hoping that last one will actually happen.