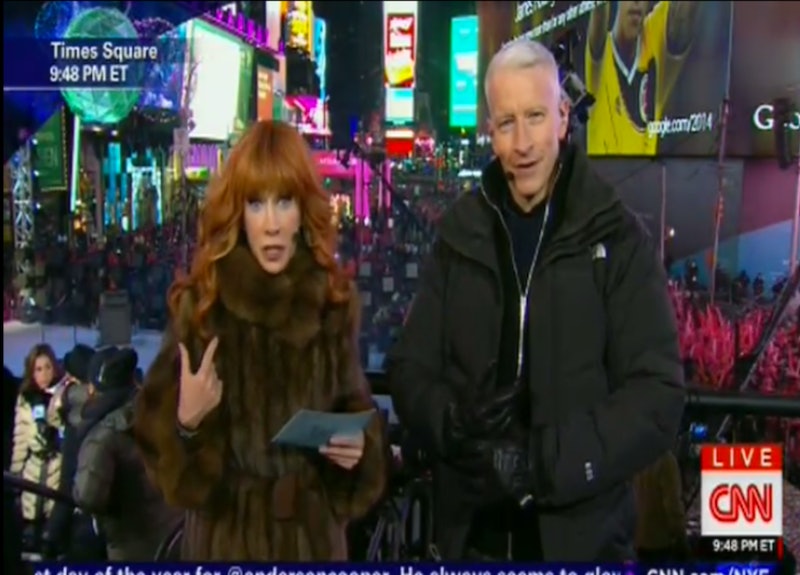 CNN's New Year’s Eve Live is off to a sterling start, is it not? Always a pleasure ringing in the new year with Anderson Cooper and Kathy Griffin. I mean, if nothing else, we've already learned so much about Gloria Vanderbilt’s silver-haired son, and we still have a long way to go before the ball drops. Griffin (and the folks at home) found out Cooper is not entirely sure as to who Tony Romo is (“Like the rib restaurant?”), is not on Tinder, loves SiriusXM station Hits1, can name more than one domestic beer, ate a Big Mac on Tuesday, and wishes a certain anti-Anderson t-shirt wearer “nothing but the best.” Griffin (and the folks at home) also discovered that Cooper likes to listen to Lorde while he goes running. K-Griff latched onto this particular piece of information with both gloved hands and would not. Let. Go.

When asked what his favorite song is, Cooper said he exercises to Rihanna and Lorde. The "reveal" about Cooper's Lorde-y workout soundtrack immediately became the running (sorry not sorry, couldn't resist) joke of the broadcast. Griffin imagined Cooper jogging to the spooky-pop sounds of Lorde... and crying and wailing "I'LL NEVER AMOUNT TO ANYTHING."

I cannot get past that visual: Anderson Cooper is in a pair of bright blue Adidas tearaway pants, tackling mile seven on an LA Fitness treadmill, and weeping as "Royals" blares from his earbuds. Occasionally, he slows down his pace to take a sip from his Nalgene water bottle, but he never stops sobbing.

(I gotta say, you haven't lived until you've worked up a sweat to "Tennis Courts" in a cardio class. Anderson knows what's up. Wait, what am I doing? Why am I challenging Kathy's hilarious callback joke? I ADORE A CALLBACK JOKE. ESPECIALLY this one.)

Griffin refused to let go of the "Anderson likes to run to Lorde" factoid, and I LOVED it. I especially loved the moment when Griffin said that when she's through with Cooper on NYE, he'll be nothing more than "a pile of dust and tears. And a treadmill playing Lorde."

More like this
Jake Daniels Just Became The UK’s First Active Football Player To Come Out As Gay Since 1990
By Sam Ramsden
What Is Jeanie Buss' Net Worth? The Lakers President Is Uber Rich
By Hugh McIntyre
Watch The Dramatic First Trailer For Netflix's Jennifer Lopez Documentary
By Alyssa Lapid
Cardi B Explains To David Letterman Why She Uses Her Star Power For Politics
By Jake Viswanath
Get Even More From Bustle — Sign Up For The Newsletter