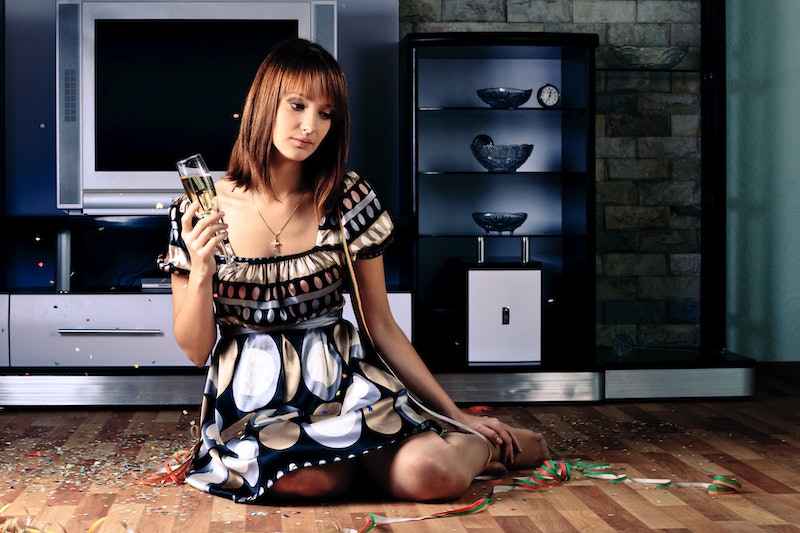 The new year is young, so there's plenty of time to fail at your resolutions yet. I hate to be a downer, but breaking these promises to ourselves and not getting what we want in the new year can easily lead to feelings of sadness, guilt, shame, and regret by the end of the year (if not even sooner). Don't be too hard on yourself, friends — New Year's resolution failure is completely normal, unsurprising research (via Pacific Standard) shows. But if you want to do better than normal this time around, you're going to have to smarten up about how you go about self-improvement.

According to a survey conducted by psychologists at the University of Scranton, just 8 percent of New Year's resolution-makers generally succeed in achieving their resolution. Although 49 percent of resolution-makers experience "infrequent success," 24 percent fail every year (ouch). These are especially dismal statistics because self-reported results probably skew towards the positive in the first place (i.e. people lie or mislead themselves about frequency of success).

Judging from the most frequently made resolutions, people really had their work cut out for themselves: losing weight, getting organized, spending less, and quitting smoking made the top 10 most common resolutions in the survey, and any one of those could easily challenge you for an entire year. Maybe that's why young people in their twenties were so much more likely to succeed in resolutions than people over 50 (39 percent to 14 percent, respectively) — because old habits really do die hard? But in the end, most people really are doing a crummy job of sticking to their resolutions.

On the other hand, though, "normal" is just a technical term for the statistically-likely characteristics of a population. By these standards, it's also normal to be overweight, have little to no savings, and to go through a divorce. While these circumstances may not lie entirely within people's own control, they're not exactly aspiration-worthy.

So keep in mind that there's a big difference between using this knowledge about the prevalence of resolution failure to avoid common and self-sabotaging resolution mistakes, and using it to justify throwing in the towel preemptively. In 2015, you can say "no" to normal and take smart steps towards being more successful at personal change than you and other Americans were in the past. For more support, I highly recommend the time management and productivity advice of Laura Vanderkam, especially in her book 168 Hours. Also check out Charles Duhigg's The Power of Habit for an in-depth look at the changers among us and how exactly they did it. Make this the year that failure is not an option.