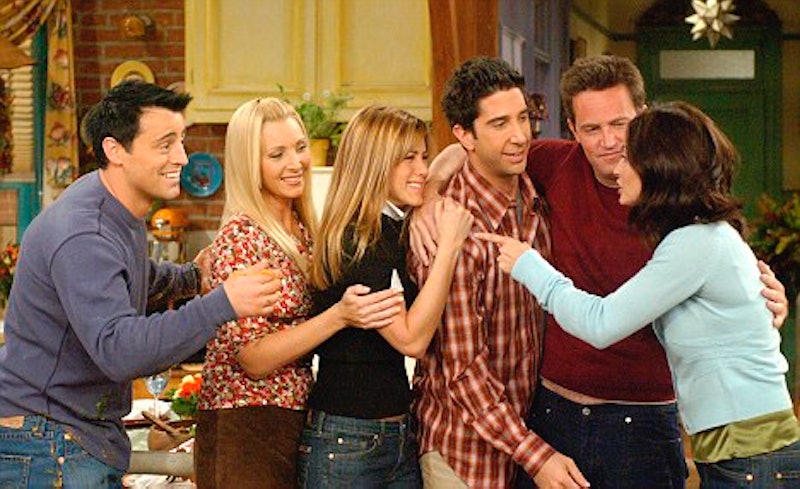 Finally, more anticipated than the second coming of Christ, Friends has made its debut on Netflix today. And I know that if you're not already watching it now you're about to, but let's pump the breaks for a second. Much like drinking, nobody PLANS to binge-watch recklessly, it just kind of happens. So it's very easy for a cute, innocent Friends marathon to go horribly wrong, and I'm here to guide you through that.

Listen, I've been there. Last year my brother decided to get the entire series on DVD, a Black Friday impulse purchase of the worst kind. Finally we broke out the DVDs after our college graduation, in the quiet weeks when I was just lightly freelancing from home and he was working twice a month at a concession stand. We had the free time, we decided to fly through the series. And much like all those shots of rum you had last night, our month-long binge watch left us with a shocking hangover: Friends kind of sucks.

I KNOW, I KNOW, this is the last thing you want to hear right now, but I think it was all in the execution. Rest assured, ceaseless episodes of Ross and Rachel's on-again-off-again shenanigans, Joey's lack of intellect, and even Chandler's snappy one-liners get nauseating. You need to approach this delicately.

So here's four settings of difficulties when it comes to binge-watching Friends. And mind you, math is not my forte and so these are merely vague, iPhone calculated estimations.

Let's start off gently, for those of us that don't want to lose control of our lives. Enjoy an episode a day after work, and two episodes a day over the weekend, and it'll just become a nonchalant part of your life for the first half of the year. No big deal.

Duration to Finish: About six months

For casual Friends fans and ambitious first-timers, amp it up to three episode per weekday and five per weekend. Yes, five per weekend. The tricky thing about this format is that it could go over the length of a single season by a few episodes, give or take. Feel free to adjust accordingly if you want to do a clean season-per-week, and then just tack on an extra week or so to finish up the season.

For hardcore Friends fanatics and people who are cool with not seeing their real-life friends any time soon. Every moment of your free time is dedicated to these six neurotic 20-somethings ("20-somethings") and you've heard "Smelly Cat" so many times it's become the theme song to your insanity. If you're okay with that, go hard: watch 12 episodes each day, so you're killing about half a season daily. Do NOT push yourselves on weekends, you'll short circuit.

Duration to Finish: A little under three weeks.

WARNING: I do not recommend this, from my experience stated above. But if you have NOTHING else going on, if you are stuck in the deep chasms of unemployment hell and your very being revolves around Friends, might as well zip through it. I wash my hands of whatever happens with this this, though.

If you want to, you can go through Friends in little less than two weeks, but I repeat, it is a soul-crushing endeavor. Essentially you're going to want to take on about about a season a day, so lets round that out to about 23 episodes daily.

Duration to Finish: About a week and a half.

Whatever your poison, please binge-watch responsibly!

More like this
Jennifer Aniston Is Still Wearing That 'Friends' Dress She Stole From Monica's Closet
By Jake Viswanath
15 Romantic Movies On Netflix That Are Perfect For Snuggling Up On The Couch
By Rachel Simon and Grace Wehniainen
15 Intriguing Movies On Netflix That Are Based On True Events
By Mary Kate McGrath, Shannon Barbour and Grace Wehniainen
Don't Expect To See Your Fave Modern Royals Depicted On 'The Crown' Season 6
By Jack Irvin
Get Even More From Bustle — Sign Up For The Newsletter