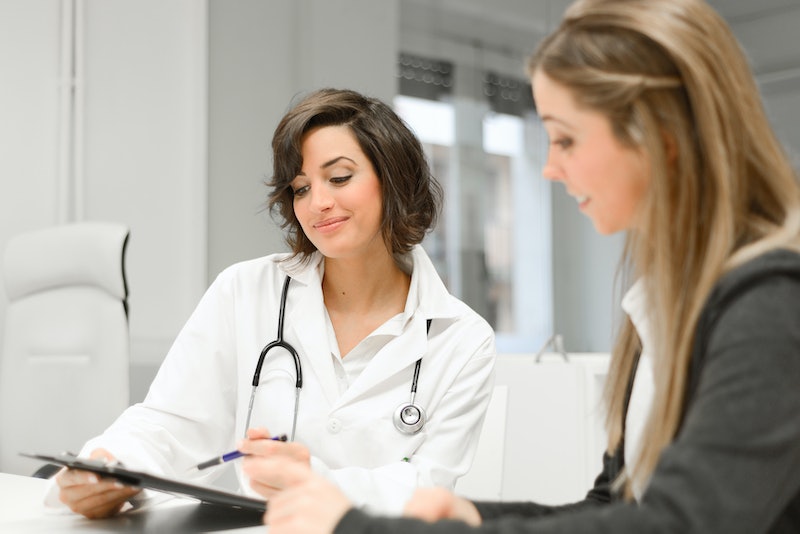 Eat this, don't eat that. Exercise this way, and don't smoke that. Live here not there, and sleep this much. It will all be worth it when we don't get cancer, right? Think again — new research suggests that most cancer is caused by bad luck, not life choices, so cross your fingers. Though lifestyle factors do matter in determining your cancer risk (and some matter more than others), put together lifestyle seems to play a lesser part in cancer development than random gene mutations.

Researchers from Johns Hopkins University, whose findings were recently published in Science, wondered why some types of tissues became the site of cancer in humans so much more often than others. They crunched the numbers (from known rates of cell division in tissues, and American cancer statistics) and learned that cancer is strongly correlated with the number of times cells divide in a given type of tissue over the course of a lifetime. Every time the cells divide, they re-introduce the possibility of pernicious and random mutations occurring, like those that cause ordinary tissues to grow wildly into malignant tumors.

This strong correlation leaves some room for other explanatory factors, like lifestyle choices, but not as much as you might have previously believed — only about one third of the risk comes from anything other than tissue characteristics. While it's still not a good idea to smoke, for instance, it may be strangely comforting to know that much of the cancer risk is out of our hands. These findings also imply that we shouldn't "shame" cancer victims as much as we might be tempted to, because it's fairly likely that their fast food diet or occasional cigarette wasn't actually the most important contributing factor to their disease. It might have been plain old bad luck.

The research comes on the heels of a controversial claim one UK doctor recently argued that cancer may even be the best way to die. You need the tissues in your body to regenerate themselves to prevent the damage of aging, even if sometimes that regeneration process goes wrong and ends up doing more harm than good. At least if you get cancer, you have some time to come to terms with your life, say goodbye to loved ones, and ease the transition into death with palliative medications, right?

Last year, my grandmother died following not one but two broken hips, and my dad's friend died of esophageal cancer. Grandma endured over a month of expensive and painful surgery, futile physical therapy, and near-unconsciousness in critical care. My dad's friend was shocked by his cancer diagnosis because he lived a healthy life, but then he had a few more OK weeks at home and died peacefully within one hour of arriving at a hospice. Although living forever would obviously be best, it's hard to say whether the bad luck of cancer later in life is truly worse than the nearly certain brutalities of aging.

More like this
An Honest Review Of The TikTok-Famous WalkingPad
By Kaitlyn Wylde
11 Benefits Of Cross-Training
By Carolyn Steber
How To Protect Your Digital Privacy If You Need An Abortion Post Roe v. Wade
By Kaitlyn Wylde
Are Gemini & Cancer Compatible In A Relationship?
By Kristine Fellizar
Get Even More From Bustle — Sign Up For The Newsletter