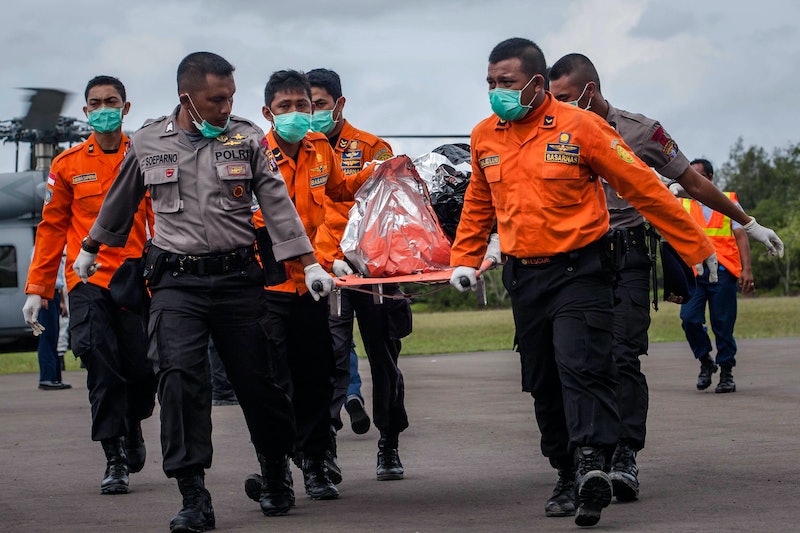 Search and rescuers are racing against time as they continue to recover debris and bodies from the crash site of Air Asia Flight QZ8501 in the Java Sea off the coast of Borneo island. On Friday, Indonesian officials said 30 bodies of Flight QZ8501 victims have been recovered, with a majority of the victims pulled from the water on the fifth day of the search. However, more than a hundred victims remain missing.

According to the Associated Press, 21 bodies were pulled from the waters of the Java Sea on Friday, where inclement weather threatens the recovery operation. Some of the victims were reportedly found strapped into their seats, their seat belts still locked firmly in place.

Indonesian officials have also said smaller parts of the aircraft have been uncovered. However, rescuers are still looking for the plane's fuselage, which officials believe is still intact and settled at the bottom of the sea. In addition to recovering bodies, rescuers are also trying to secure the plane's black box, located in the tail of the aircraft, to discover what really happened to the ill-fated flight that crashed on Sunday morning en route from Surabaya to Singapore while carrying 162 passengers.

At this time, the reason for the crash is still unconfirmed. Toos Saniotoso, an Indonesian air safety investigator, told the Associated Press that officials are "looking at every aspect" of the crash, from "the operational side" and "the human factor."

In a Facebook post on Friday, AirAsia confirmed that just four remains have been formally identified by the Disaster Victim Identification Police Department of Republic of Indonesia. The bodies are in the process of being returned to the victims' family members.

One the identified victims was flight attendant Khairunisa Haidar Fauzie, who sent a loving message from the skies while on the job just two weeks ago. Fauzie's Instagram post — symbolizing her final message — soon went viral.

AirAsia said in a statement that the 22-year-old flight attendant "was well known for her professionalism as well as dedication at work." She was with the company for nearly two years.

"Our thoughts and prayers remain with the families and friends of our passengers and colleagues on board QZ 8501," AirAsia added in the statement.

Indonesia's main concern now is recovering the black box and the jet's fuselage, where officials believe most of the bodies may be located. Bambang Soelistyo, head of Indonesia's National Search and Rescue Agency, told reporters on Friday that rescuers are focused on "underwater detection" to track down the fuselage and black box recorder. Ships from Malaysia and the United States have joined Malaysia in the search for the wreckage. Soelistyo added that ships from Japan are also on the way.

Although the severe weather in the region has hindered the recovery operations, rescuers are still hopeful the fuselage can be found because of the sea's relatively shallow water depth. Indonesia Defense Minister Ng Eng Hen said in a Facebook post on Friday that the RSS Supreme found a window panel from the aircraft, as well as a piece of luggage. All recovered debris and personal items will be turned over to Indonesian search authorities, the defense minister said.