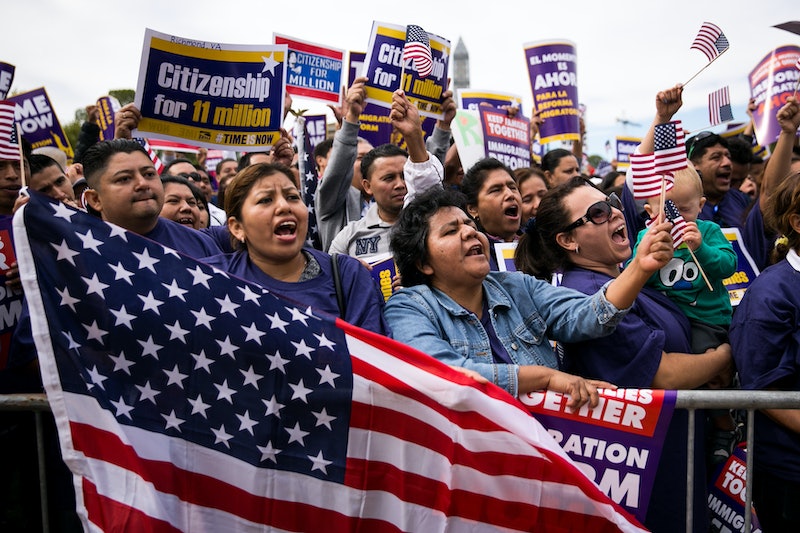 For thousands of undocumented immigrants living in California, things just got a little bit better, and that's heartening. It's all thanks to the passage of Assembly Bill 60 last year, which went into effect at the start of 2015, opening up the state to offer adult immigrants who aren't legal citizens a crucial piece of identification: California's undocumented immigrants are now driver's license eligible. And it's clearly being received with as much enthusiasm as any advocate would hope and expect — 6,000 people turned out on the first day to register, according to NBC News.

It's terrific news all around, for anyone who deeply cares about the everyday lives of undocumented immigrants. And in California, there's a lot of those lives — as of 2009, the Golden State was home to 2.6 million undocumented immigrants, according to data from the Department of Homeland Security, the highest number in the United States. And now, those millions have the opportunity to apply for a license, and thus be able to drive free from the harrowing fear of being pulled over, and potentially having their immigration status exposed. As one San Jose woman told NBC Bay Area after applying: "It's a blessing."

With this law on the books, California joins nine other states — Washington, Nevada, Utah, Colorado, New Mexico, Illinois, Maryland, Connecticut and Vermont — in offering licenses to undocumented immigrants (the District of Columbia and Puerto Rico also do so).

As anybody who's gone through the process of getting a license before knows, however, it isn't as simple as showing up and walking out with papers in hand — you have to pass both a driving test and a written exam. (If you're thinking about applying, you can study on some sample tests here.) And you also have to demonstrate that you're a resident of the country, something easy to take for granted for somebody born here, but a potential stumbling block for some immigrants who've been relegated to living life in the shadows.

This is a move which has actually been supported in the past by high-profile figures in law enforcement — former LAPD and current NYPD commissioner Bill Bratton, for example, who backed a similar effort, Senate Bill 60, back in 2003.

... when we prevent people from obeying the law, we place them and ourselves needlessly at risk. Senate Bill 60 corrects that inequity by allowing everyone who wants to operate a vehicle to do so legally by obtaining a license and purchasing required insurance.

It's a huge step for California, where immigration politics have had a rather tortured history in decades past. It was only 21 years ago, in 1994, when Proposition 187 passed by a statewide vote. A draconian law backed by then-Republican governor Pete Wilson, Prop. 187 — also dismally known as the "Save our State" law — actually denied public health services to anybody who couldn't demonstrate their citizenship, as well as denying public education to undocumented children.

Mercifully, Prop. 187 was ruled unconstitutional by a federal judge in 1997, and in 1999 the Democratic administration of Governor Gray Davis dropped any appeal, ending the law for good.

There are always going to be implementation issues with anything that affects communities who've had to be so cautious for so long, of course, risking arrest or deportation if the wrong person becomes aware of them. There's been an entirely understandable hesitance on the part of many undocumented immigrants to get involved in anything that puts their name on file in a government system, and as such dealing with the DMV may seem threatening.

But with the constant risk of traffic stops as mundane a reality as any, everyday life for such a person with a driver's license figures to be massively safer and more secure on the whole. So hopefully, these early thousands of people applying will be followed by thousands upon thousands more! Just be sure to study up on those left-turn lane rules, that's how I flunked the first time.