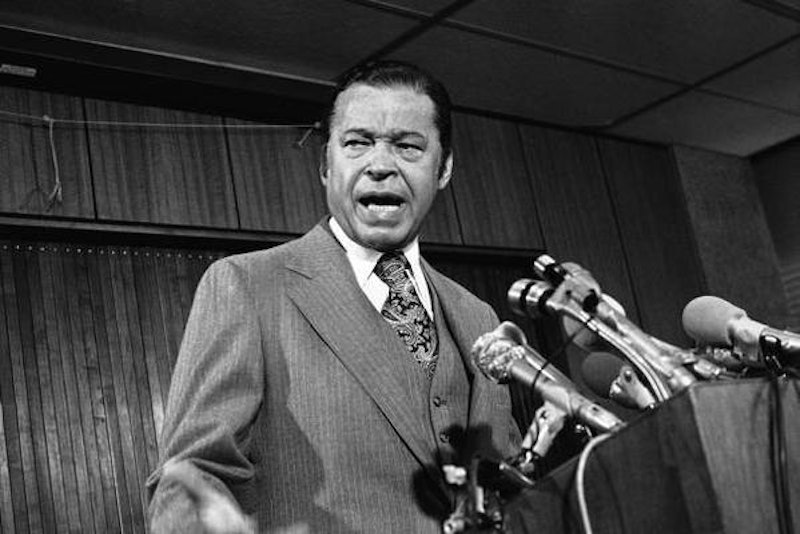 It's definitely a sad news day today, as one of the great trailblazers of American politics has passed away. But he leaves a robust legacy, and he won't soon be forgotten: Edward Brooke, the first black Senator elected by popular vote, has died Saturday at the age of 95. Brooke was elected to the Senate and in 1966, and began serving in 1967, representing the traditionally Democratic state of Massachusetts, despite being a Republican. He'd also previously served as Massachusetts attorney general for two terms, another historic feat, and served in the U.S. Army in World War II in his youth.

As The New York Times details, Brooke's arrival on Capitol Hill after that 1966 election was personally shepherded by another iconic Massachusetts lawmaker, the late Ted Kennedy. It may seem strange nowadays to imagine a freshly-minted senator entering the chamber with an escort from his senior counterpart from the opposing party. But back then, with the magnitude of Brooke's victory so immense, the parties more prone to moderation, and relations between them less acrimonious, the result was moving and historic moment of recognition, and one which Brooke richly deserved.

He made further history (which still stands today) in being reelected, serving his second term from 1973 to 1979. To this day, no other black senator has successfully won reelection. He ultimately lost his seat to Massachusetts Rep. and eventual presidential candidate Paul Tsongas in 1979, amid scandal relating to his divorce proceedings — an experience he described, according to the Times, as "the lowest point in my life."

Outgoing Massachusetts Governor Deval Patrick, himself an extremely accomplished and successful black politician in the state's history, gave his thoughts on Brooke after news of his death, as detailed by The Boston Globe.

Massachusetts has a history of sending giants to the United States Senate, great statesmen like Quincy Adams, Webster, Cabot Lodge, and Kennedy. We count Ed Brooke among them. He carried the added honor and burden of being ‘the first’ and did so with distinction and grace. I have lost a friend and mentor. America has lost a superb example of selfless service. Diane and I extend our deepest condolences to the Brooke family.

Brooke is survived by his son, two daughters, six grandchildren, and his wife, Anne Fleming. He also received a pair of towering awards late in his life — in 2004, President George W. Bush awarded him the vaunted Presidential Medal of Freedome, the highest civilian honor the government can bestow, and in 2009, he received the Congressional Gold Medal from President Obama, who summed Brooke up thusly.

So while we grace Senator Brooke with this honor today, perhaps a better tribute to him would be to embrace that spirit: to compete aggressively at the polls, but then work selflessly together to serve the nation we love. To look for the best in each other, to give each other the benefit of the doubt, and to remember that we're here for a purpose far greater than the sum of our own hopes, needs and ambitions. That's the legacy of our friend, Senator Edward Brooke. And may we each do our part to carry it forward.