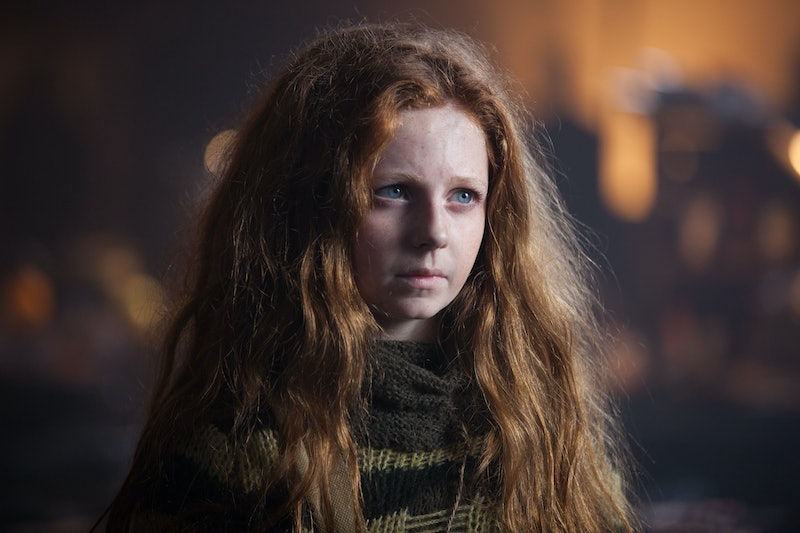 One thing Gotham has going for it is a keen understanding of how terrifying children can be. Horror films have been banking on that for years! One of the most quietly intriguing characters is Clare Foley's Ivy Pepper — especially since Gotham's Poison Ivy has a different background than DC comics'. This modernized take on Gotham City lore has made a few changes and adjustments. The biggest, of course, is the addition of original character Fish Mooney, but from what we've seen of Ivy so far, it's clear Poison Ivy's transformation will be a notable difference too.

The villain was played by Uma Thurman in the movie Batman & Robin. Thirteen-year-old Clare Foley plays Ivy Pepper on on Gotham, which introduced her as the daughter of a man who was presumably framed for the Wayne murders. Working with plants seems to calm Ivy down, and Selina Kyle is scared of her and warns Bruce Wayne to leave her alone. We got the sense that Ivy's father was abusive and her mother may have committed suicide. So Pepper, like Bruce, is an orphan. She ran away and was spotted at "The Flea," where Kyle went to find her fence. She was not, however, kidnapped along with the other runaway orphans by Doug and Patty (Mayonnaise?) in the "Selina Kyle" episode.

What was Poison Ivy like in the comics? How does she get her powers, presuming she has powers? Different comics have envisioned her origin different ways. Here are a few things that set Ivy apart from her television mini-me.

On Gotham, Poison Ivy even has a different name. In the comics, she's not Ivy Pepper. Her name is Pamela Lillian Isely. This is what Gotham EP Bruno Heller had to say about the name change in an interview with IGN:

It’s really about being able to tell the secret histories of these stories. If you just re-tell stories exactly as they’ve been told before, whilst you’re being true to the created mythology, you’re not really adding anything to it. So you have to find ways of finding more.

Heller and IGN also implied that Ivy's adopted parents will give her a new name, so I guess we'll have to wait and see if it matches her DC origins.

In one origin story, Pamela is born with an aversion to sunlight. Her mother liked to garden, because she liked to commune with plants, and her father always brought flowers after he hit his wife, causing the garden to flourish. This connected flowers with the ability to control in young Pam's mind.

Originally from Seattle, Pam Isely was seduced by her professor into a life of crime. When he got spooked that she would expose him, the teacher injected her with poisonous herbs. However, it only made her stronger, causing her to develop an immunity to toxins and disease. In other versions of the story, Ivy is injected by the professor as an experiment and is driven insane. I think I prefer the former origin story. It gives her a little more agency. Another version of the origin story has her mixing and selling drugs, then landing an internship at Wayne Enterprises.

Her exploits at school cause her to drop out, and she ends up in Gotham City.

That's what she's all about. Poison Ivy uses plants to get to people. When she is thrown in Arkham Asylum and obsesses over her inability to control the Batman, she develops her own plant-based super powers. She is able to kill people by kissing them. She thrives on being able to control her surroundings. She's also kind of a misandrist — her pheromone powers make men an easy target.

Ivy Pepper is still just a kid on Gotham, so we have some time before finding out what path the show sends her down on the way to becoming Poison Ivy.