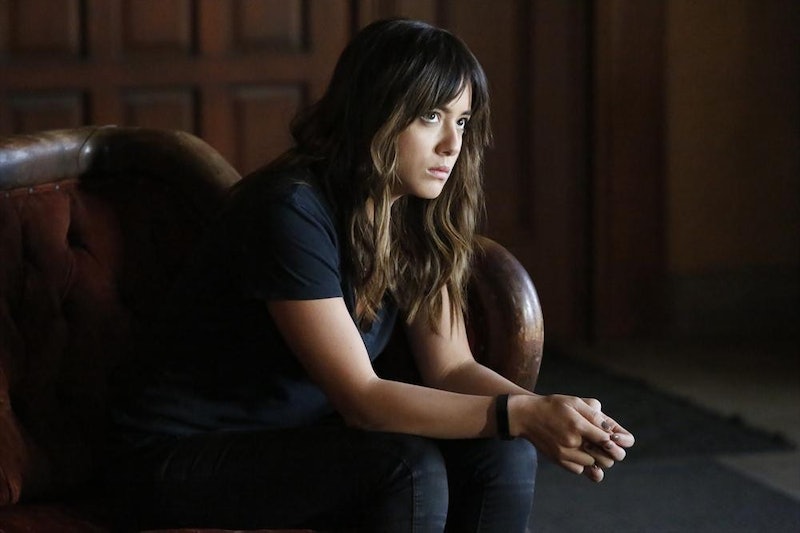 Maybe I'm just a fan of things that come in groups of three. Or maybe I'm waiting for the next "Ward Is Hydra" reveal. Whatever it is, I'm thinking that another character on Agents of S.H.I.E.L.D. is an Inhuman and will undergo their transformation — or even choose not to. That is also a possibility. The Agent Formerly Known as Skye wasn't given much of a choice. Daisy and Raina both became something greater, and my dreams that Tripp would be a superhero too turned to ash along with him. Could anyone else on the team be Inhuman? I think it's more than possible. I am inspired by Tumblr user crispeechips, who theorized that Pepper Potts is Inhuman (which would be awesome) based on an off-hand remark in Iron Man 3, to try and think of who could surprise us on Marvel's Agents of S.H.I.E.L.D.

It would be cool if the series introduced fan favorite superheroine Kamala Khan, currently serving in the Marvel Comics Universe as Ms. Marvel, using Inhumanity as a mechanism. She is Inhuman and a way cool gal. However, it would be better if such a pivotal character was introduced in the movies. Let's focus on the Agents of S.H.I.E.L.D. characters, and who could surprise us.

The idea is that Inhumans are superheroes hiding in plain sight, just waiting for their powers to be awakened. It's the fantasy we all dream of as kids, and maybe sometimes as adults. It's the Hogwarts letter that never arrived. Even Vin Diesel was getting in on the fun.

Who on Coulson's crew could have dormant superpowers? We know Coulson himself is unlikely, given his reaction to the Kree blood. If Mac were Inhuman, he would not have turned into a zombie ant in the Temple. I think Bobbi Morse and Lance Hunter are too new to have that thrown at them. Please Loki, don't let Ward be Inhuman as well as Hydra. What kind of powers would he even have, memory manipulation?

If The Calvary were Inhuman, that might explain why May and Dr. Garner got divorced. He works with unidentified gifteds. It's a tale as old as time. Simmons would make a nice foil to both Skye and Raina. I can also see her being conflicted about undergoing Terrigenesis. From a research standpoint, it would be hard to resist. From a personal place, it's dangerous and unpredictable. We don't know much about Simmons' history, except that both of her parents are alive. It would be cool to have three ladies come into power at the same time. However, I have a feeling the show will want to balance things out if they do take that path.

Therefore, my top pick for the next Inhuman on Agents of S.H.I.E.L.D. is Fitz. That boy needs a win right now more than anybody. He's been betrayed, he's getting over what must feel like a bad breakup even though nothing happened between him and Simmons in the first place, and he's still not fully recovered from his brain damage. I'm still pretty sure he stopped wearing his signature casual ties this seasons because he can't physically do it anymore. These are the makings of an origin story.

Of course, another potential candidate for Inhumanity is the incomparable Thomas Ward. The series can't keep holding out on Grant's younger, abused brother's identity! If we haven't seen his whereabouts by now, he has to be a villain, right? What if he is the Eyeless Inhuman? I can't wait for him to go all Syndrome from The Incredibles on us.