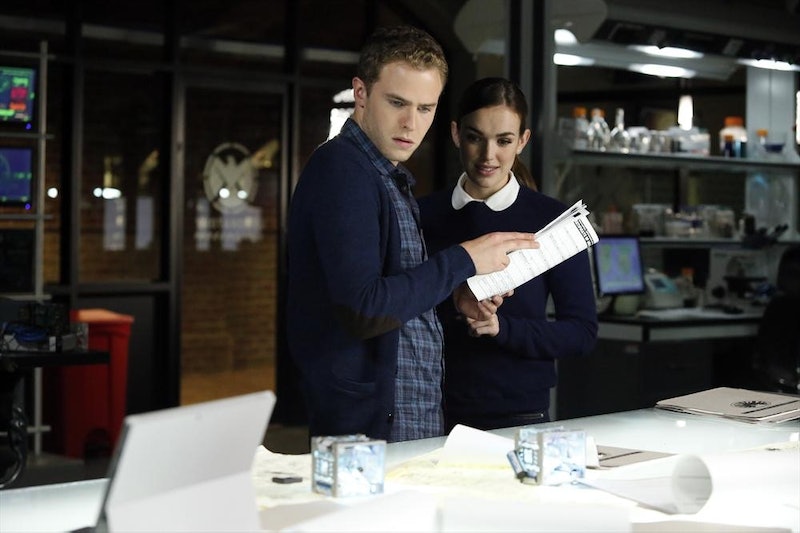 As fans waited all summer for the return of Marvel's Agents of S.H.I.E.L.D., one question lingered that though not quite as mysterious as Skye's true parentage, held just as much significance: what will happen to Fitz? Thanks to Tuesday night's premiere we know that though Fitz is alive, he hasn't fully recovered from his near-death last season. I was going to say that don't know who's struggling with it more, us or Simmons, until it was revealed that we don't know how Simmons is handling it, because FITZ IS BASICALLY CRAZY AND SIMMONS WAS NOT ACTUALLY THERE. (In this episode, Season 1 Simmons is real and just thought Fitz would recover better without her.)

From the moment we saw Simmons, it was clear something was wrong — we just didn't know how wrong. When she asked how things were going in the lab, she gave a half-hearted response, before entering the room and giving us a glimpse of Fitz, lost in thought. At first it was a relief to know that he was alive and seemingly well, considering he was unconscious the last time we saw him, but quickly we realized something was wrong. Fitz was just standing there, staring at the project he was supposed to be working on, and Simmons had to prompt him back to work by reminding him of what he was supposed to do. What?

Usually Fitz and Simmons work together seamlessly, anticipating each other's actions and doing different scientific things that I barely understand to solve whatever problem they've been charged with. But Simmons had to tell Fitz what to do, and his response was anything but grateful. Instead, Fitz was clearly angry with Simmons and continued speaking to her in an annoyed, rude tone. And that's not all that's changed in his way of speaking. Fitz repeatedly forgot simple words and got confused in the middle of sentence, needing Simmons to help him fill in the blanks.

Eventually Fitz spoke to Simmons nicely again, grasping her hand in a way that made it pretty obvious nothing's changed since he confessed his feelings for her last season. Later in the episode, he even told her that he only feels "clear" and like he can get better when he's around her, after lamenting that he thinks everyone looks at him differently now. They seemed to be on the right track, until the very end of the episode when Coulson BLEW OUR DAMN MINDS.

Simmons was never there! Fitz has been talking to himself more and more since his injury, and rather than help him, Simmons leaving has just driven him into a deeper hole. Coulson doesn't think Fitz will ever be back to his usual self and based on this episode, I'm not so sure either. One thing's for sure: Fitz only has a chance if Simmons returns. They work better together, and after last season's trauma, it seems Fitz can't work at all without her.