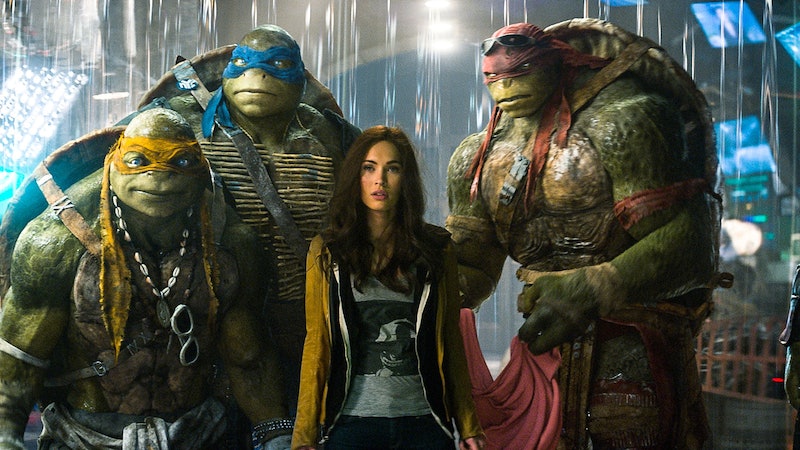 As a rule, DVDs are a pretty popular Christmas gift. There was a time when I requested a season of Friends and Dawson's Creek every year until I had the full series collection, and even in the age of Netflix, Apple TV, and digital downloads, people are still buying DVDs. And now that an official list of top DVD sales for the week ending in December 28 has been released — otherwise known as the week of Christmas — we can gain a little insight into what movies were popular under the tree this year. Spoiler alert: The ranking isn't at all what you'd expect.

Because while the top 10 movies include predictable favorites that did well in the box office, like Guardians of The Galaxy and Maleficent, the number one movie is completely unexpected. I would've assumed it was Frozen, but nope, Anna and Elsa take the fourth spot. Number one is Teenage Mutant Ninja Turtles. Yep, the one starring Megan Fox. The one with the creepily live action turtles who will forever haunt my nightmares. The one that was called "spectacularly lazy filmmaking" by celebrated film critic Roger Ebert's website. That one.

It's surprising from the standpoint that it's universally understood that TMNT was a pretty bad movie. It's less surprising when you think about the fact that there are a lot of kids who love movies despite the fact that they're critically panned by adults and put the DVD on their Christmas lists anyway. And when you come to that conclusion, it actually becomes way more sad that this incarnation of the turtles is what this generation of children thinks they are. Kids, watch the '90s turtles. They're way better, I swear to you.

Here are the top 10 in sales, according to Variety:

1. Teenage Mutant Ninja Turtles2. Guardians of the Galaxy3. The Maze Runner4. Frozen5. Maleficent6. Dawn of the Planet of the Apes7. How to Train Your Dragon 28. The Hobbit: The Desolation of Smaug9. 22 Jump Street10. Dolphin Tale 2

And in my opinion, 22 Jump Street should have been higher on the list. I don't care what anyone else says — I will keep watching Jump Street movies until Channing Tatum and Jonah Hill are solving crimes from the nursing home.