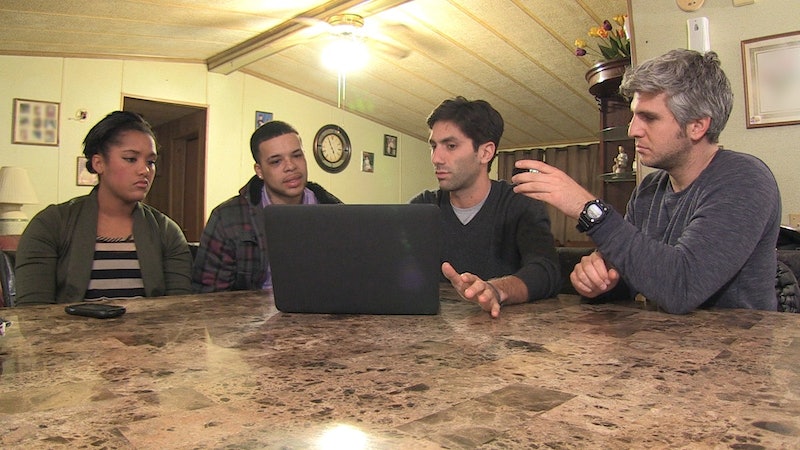 When Catfish finally returns for Season 4, it's going to have a hard time topping last season's premiere. In the first episode of Season 3, we were introduced to one of the most destructive Catfish villains in the show's history... and everything snowballed from there. It all started with Craig, a well meaning 24-year-old from Pennsylvania who was having trouble tracking down a girl he'd fallen in love with online, Zoe. Despite his feelings for her, it was obvious from the get go that she was no good for him — after all, she'd managed to wreak all kinds of havoc in his circle of friends, not to be thwarted by the fact that she'd never met any of them in person. So where are Catfish 's Craig and Zoe today? To answer that question, I need to go back and detail "Zoe's" offenses, because I'm still pretty mad about what went down.

Because Nev wasn't wrong when he dubbed her the first "Catfish terrorist." Zoe — real name Cassandra Rozmus — was basically a nightmare. After poor, innocent, oblivious Craig gave her his Facebook password, she'd discovered a female friend of his had shared nude pictures with her and proceeded to post the photos, along with her first name and school, on Facebook for the world to see. And once Craig, Max, and Nev managed to track down Cassandra to find out what her deal was, she showed little to no remorse about what she'd done. It wasn't until later that she admitted that her behavior was a result of being bullied in the past and that it was an issue she definitely needed to tackle.

If Craig is still online — and honestly, I wouldn't blame him if he'd renounced social media altogether after that horrifying experience — he's near impossible to track down. Although one of my many useless talents is being able to track down just about anyone on the internet with very little info about them, I can't find Craig's last name, let alone his Twitter account. I'm willing to bet he has nothing to do with Cassandra, though. And since he's such a sweet guy, I hope that he's doing well and is finding more happiness in his life now that he's rid of Cassandra's drama.

And as for Cassandra? She's on Twitter, and she really isn't in the mood to talk about Catfish.

Not that this is necessarily surprising. After all, the episode didn't paint her in the greatest light. And it's not Catfish's fault. It's entirely her own. Hopefully, though, she's found more productive ways to use her time and has managed to begin the healing process from the scars bullying has left on her life, although this episode will probably haunt her for a long time. Internet bullies, let the story of Craig and Cassandra serve as a cautionary tale. It just isn't worth it.

More like this
What’s New On Netflix: A Victoria Justice Rom-Com & The Return Of David Letterman
By Arya Roshanian
What’s New On Netflix: The Return Of 'Bling Empire' & A Rebel Wilson Comedy
By Arya Roshanian
Kanye Walked Out Of Kim's 'SNL' Monologue Because Of These 2 Words
By Jake Viswanath
Kourtney & Travis Crashed His Daughter’s TikTok Live In Their 2nd Wedding Outfits
By Grace Wehniainen
Get Even More From Bustle — Sign Up For The Newsletter