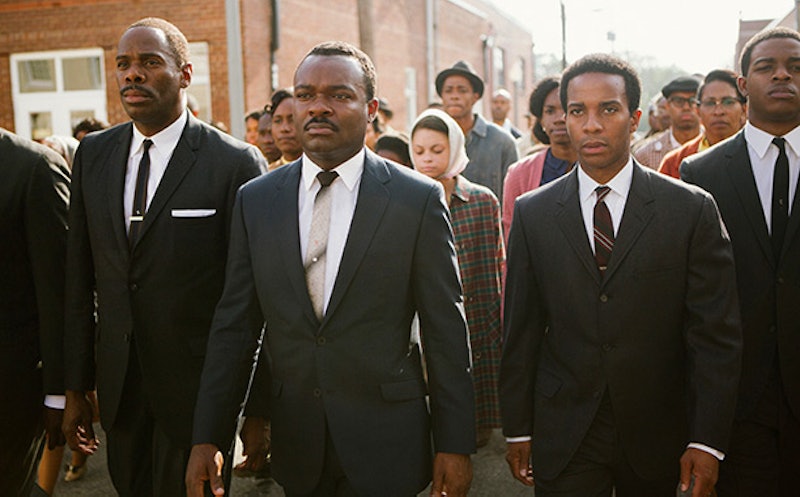 Almost all historical films face accusations of inaccuracy. These can range from debates over facts, such as Mark Schultz's problems with Foxcatcher, to less definable errors of omission, such as Christian complaints about breezing over Louis Zamperini's Christianity in Unbroken . Selma, the historical examination of the Selma to Montgomery voting rights marches, has performed spectacularly critically and in its limited release, but it also has received some criticism directed at its historical accuracy.

What are these criticisms exactly? Many of them center around the film's portrayal of then president Lyndon B. Johnson. Members of Johnson's staff have said that Johnson was far more supportive of civil rights than he was in the film. In the movie, there's a confrontation between King and Johnson in which Johnson says he doesn't have time to focus on civil rights. However, Andrew Young, who was present at the historical meeting, told the Washington Post that the meeting was far less tense. Additionally, former LBJ assistant Joseph A. Califano Jr. wrote in a scathing Post article that Selma was President Johnson's idea. In a 1965 telephone call, Califano quotes Johnson as saying to King:

“And if you can find the worst condition that you run into in Alabama, Mississippi or Louisiana or South Carolina . . . and if you just take that one illustration and get it on radio, get it on television, get it in the pulpits, get it in the meetings, get it everyplace you can. Pretty soon the fellow that didn’t do anything but drive a tractor will say, ‘Well, that’s not right, that’s not fair,’ and then that will help us on what we’re going to shove through [Congress] in the end.”

A few more historical inaccuracies have been raised. These mainly include small facts and dates that have been altered, such as the time between King's Nobel speech and the Birmingham bombing. While the minor errors are not of much concern, sullying LBJ's relationship to the civil rights movement is a more serious offense. It's a complicated issue. Suggesting in a movie about civil rights that it was actually a white American president's idea could be gravely insulting, as Ava DuVernay, the film's director, articulated in a tweet:

This is true, and Califano's article does not prove that Selma was LBJ's idea. It does raise interesting questions about historical accuracy: is it worse to alter some facts to be true to the overall tone of the moment, or include truths that sully an historical legacy? It's a question that seems impossible to answer, but important to consider.

More like this
After 'Hocus Pocus 2', The Sanderson Sisters Are Coming to Broadway
By Radhika Menon
Lin-Manuel Miranda & Tituss Burgess React To 'Little Mermaid' Casting Backlash
By Radhika Menon
14 Women To Watch This Oscar Season
By Marina Watts
An Extremely Messy Ranking Of What Actually Happens In 'Don't Worry Darling'
By Chloe Foussianes
Get Even More From Bustle — Sign Up For The Newsletter