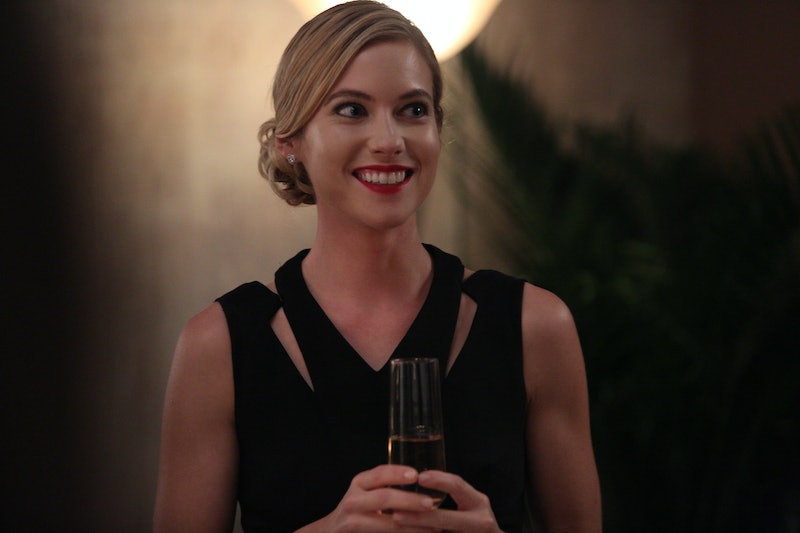 The ability to change the past is an idea that us humans are fascinated by — and because of it, there are a multitude of movies and TV shows about the subject. The newest edition to the genre is VH1's show Hindsight and there are plenty of movies that have the same premise as Hindsight. The new series, set to premiere on Jan. 7, shows lead character Becca magically transported in an elevator from present day to 1995. In 2015, she's about to marry her responsible, but no-sparks-flying fiancé, while in 1995, she's about to marry her bad boy, sexy first husband. By going back in time, Becca is given the chance to change her past and thus, her future.

TV shows like Quantum Leap (starring dreamy Scott Bakula) and Early Edition (starring the even dreamier Kyle Chandler) focused on their leading men fixing events that happened in the past and future, respectively. But they were usually less personal and focused on the greater good. Of course, time travel and body switches to gain personal perspective are well-worn themes — particularly in film. And though the content may be cliché, the movies allow us to watch the impossible become possible.

There is good reason that most of the entertainment with time travel tropes are movies — the film must resolve the crazy paradox that it created, which could prove difficult with a longer format like a television series. Viewers should never look too deeply into the resolutions of how the main characters end up back in their own beds in the correct time at the end. The premise of time jumping is kind of absurd (sorry, Doc Brown), so usually the films fail in explaining exactly how everything happened .

But the fantastical unknown is really the fun of it. And it will be interesting to see how Hindsight shows Becca getting to live her life over again as the series unfolds, hopefully for multiple seasons (the pilot episode showed some awesome promise).

In honor of VH1's (scripted!) series premiere on Wednesday night, let's look to seven other movies that inspired Hindsight.

Peggy Sue Got Married (like Back to the Future, which I would be remiss in not referencing again, but am not including in this list since Marty changes his parents' lives in the first one and not his own) shows the lead character jumping from the 1980s to the '60s. Peggy Sue (Kathleen Turner) passes out at her 25-year high school reunion and ends up in 1960 to relive her senior year of high school. Nicolas Cage costars as her separated husband in 1985 and her high school boyfriend in 1960. Given the opportunity to change her romantic life, the film ends with her waking up back in the present-day 1985 with the assumption that she will give her estranged husband another shot.

Cage must have a thing for movies about changing futures, since he also starred in 2000's The Family Man. He played a hard businessman who let the love of his life, Kate, slip away a decade earlier. He encounters Don Cheadle (who acts as his guide of sorts) in a convenience store and wakes up the next morning — in the same year — but in the life he would have had if he had married Kate. Becca in Hindsight also has a kind of spirit guide in the form Xavier, whom she met on the street in 2015 right before she time jumped and then again at a bar in 1995. Props to The Family Man for its believable (yet bittersweet) ending.

It's a Wonderful Life

The quintessential Christmas movie also deals with its main character seeing how his life would be different — but in this case, it's if he had never lived at all (and it's not so wonderful). The subject of It's a Wonderful Life is a bit different since George Bailey doesn't actually get to change his past or future, but he does get see how his actions affected everyone around him — leading to a conclusion full of happy tears streaming down my face.

17 Again is another movie that takes a twist on the changing-your-future story line. Matthew Perry reverts back to his 17-year-old self (Zac Efron) in the present day in order to get closer to his family and soon-to-be-ex wife. It's a total guilty pleasure movie, but Efron really does resemble and act like a young Perry.

Instead of traveling in time, Bill Murray in Groundhog Day gets stuck living the same day over and over. It takes him a lot of repetition — and suicide attempts (including one with Punxsutawney Phil) — before he can break the cycle. Not until he improves his outlook and helps the people of the town can he move on from Feb 2. And he gets the girl (played by Andie MacDowell) in the end as well.

13 Going on 30 embraces nostalgia like Hindsight does — but it focuses on the 1980s instead of the 1990s. As my favorite film of this whole change-your-future genre, Hindsight is in good company. The pilot episode even pays homage (whether intentional or not) to 13 Going on 30 when Becca first learns she is in 1995. She runs around the streets of NYC in her pajamas à la Jenna Rink in 13 Going to 30 (Jenna even goes to work in them). Although Jennifer Garner went to the future, not the past, it inspired her to change how she was living her life so she would end up 30, flirty, and thriving with dreamboat Matty Flamhaff — and not the vain, shallow, ruthless woman she could have been.

John Cusack — the king of '80s movies — went back in time to the decade in Hot Tub Time Machine. Along with his two friends and nephew, they travel back to the most epic night of the threesome's life (his nephew wasn't born yet) in 1986 to improve their futures. But the men weren't satisfied with one dip and Hot Tub Time Machine 2 will be released on Feb. 20 (sans Cusack, plus Adam Scott).

So although Hindsight isn't innovative, it is breaking the mold slightly by being a television show and revisiting the now-ancient 1990s. (Ahh, can it be!? When did 1995 become two decades ago?). And let's hope Becca can make the most out of her future through her past.

More like this
What’s New On Netflix: A Victoria Justice Rom-Com & The Return Of David Letterman
By Arya Roshanian
What’s New On Netflix: The Return Of 'Bling Empire' & A Rebel Wilson Comedy
By Arya Roshanian
Amanda Seyfried Reflects On 'Mean Girls' & "Gross" Remarks That Men Made After It
By Jake Viswanath
'Dirty Dancing's Jennifer Grey On The Tearful Moment That Changed Her Relationship With Patrick Swayze
By Sam Ramsden
Get Even More From Bustle — Sign Up For The Newsletter