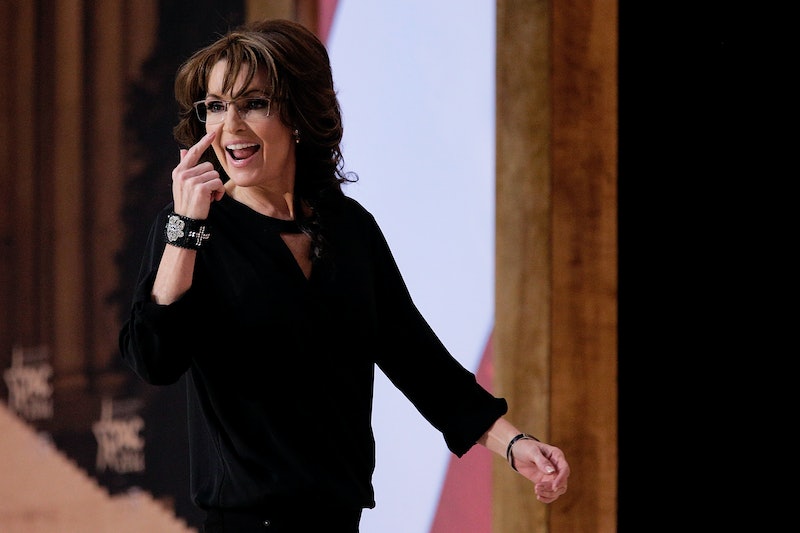 One politician's ongoing feud with People for the Ethical Treatment of Animals (PETA) has been reignited, after Sarah Palin asked PETA to "chill" in a Facebook post. On her page, Palin wrote on Saturday:

If you haven't been following this dramatic saga, Palin's rant was in reference to PETA's response to a New Year's day Facebook post of her 6-year-old son, Trig — who has Down's Syndrome — stepping on the family dog, Jill Hadassah, to get to the kitchen sink. PETA President Ingrid Newkirk, then said in a statement to Politico that the photos was "inappropriate," adding:

It’s odd that anyone — let alone a mother — would find it appropriate to post such a thing, with no apparent sympathy for the dog in the photo. Then again, PETA, along with everyone else, is used to the hard-hearted, seeming obliviousness of this bizarrely callous woman.

And if we know the woman we all strongly question, Palin is not one to take things lying down. She challenged PETA's silence on Ellen DeGeneres, who posted a similar picture of a boy standing on a dog, and when President Obama wrote in his memoir of eating dog meat in Indonesia. She wrote:

Our pets, including Trig’s best buddy Jill Hadassah, are loved, spoiled and cared for more than some people care for their fellow man whose politics may not mesh with nonsensical liberally failed ways or don’t fit your flighty standards.

Newkirk, on behalf of PETA, fired back at the former governor of Alaska with a caustic reference to the former vice-presidential candidate's infamously saying she could see Russia from her house in Alaska, in a statement on POLITICO:

PETA simply believes that people shouldn’t step on dogs. Palin’s Facebook response shows us that she knows PETA about as well as she knows geography. We have no reason to believe that the Palin companion animals aren’t ordinarily pampered, and we wish the entire family a peaceful and humane 2015.

But perhaps one of Palin's accusations that stung PETA the most was about the renegade animal rights group not practicing what it preached:

[W]e’re a vegan organisation, so we sit on pleather couches, wear stylish vegan kicks and consider fish friends, not food. (Also, by the way, we just sent a case of vegan caviar to Vladimir Putin – and no, you can’t see his house from yours, Ms Palin.)

While it really can't be said that this PETA-Palin feud is in any way surprising — PETA once slammed the former lawmaker for carrying out a Thanksgiving turkey pardoning while turkeys were being slaughtered in the background — it does seem like both sides, both radicals on opposite ends of the spectrum, might yet have the energy to keep this dispute going.

More like this
What Is Barack Obama’s Net Worth? He Makes *Way* More Now As An Ex-President
By Hugh McIntyre
Michigan’s Governor Is “Going To Fight Like Hell” To Protect Abortion Access
By Andrea Zelinski
10 Times Diana & Meghan Spoke Similarly On The Royal Family
By Sophie McEvoy
Kim Kardashian Remembers Her Last Words To Death Row Victim Brandon Bernard
By Jake Viswanath
Get Even More From Bustle — Sign Up For The Newsletter