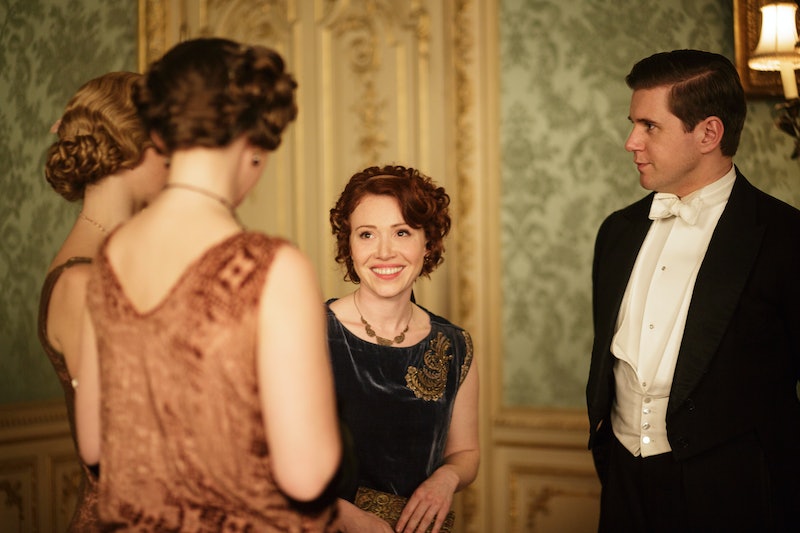 It looks like Mrs. Crawley is no longer alone at Downton Abbey. She's got an outspoken companion in Tom's not-girlfriend Sarah Bunting — the teacher he got caught touring the house with last season, much to Lord Grantham's disappointment. While Mrs. Crawley has always thrown her political beliefs into the wind, only to have them land in the Dowager Countess' face for a quick, indignant one-liner, Sarah brings back the fight in Tom that he had when Sybil was still alive in the Downton Abbey Season 5 premiere. Naturally, this horrifies just about everyone aside from Mrs. Crawley, who pipes up to defend the presence of "another smart brain" at the Granthams' dinner.

While Sarah certainly helps deliver our own inner monologues to the snobbish Granthams (that dotty friend of Lady Rose was definitely proliferating some damn hurtful stereotypes about women not caring about math and writing), she doesn't really do much for her own friendship with Tom. After all, Lord Grantham already hates her for being in his house with Tom when Lord Grantham was not present.

And at dinner, she goes for gold, attacking Grantham's open wound: the fact that he wasn't chosen to head up the production of the town's war memorial. When Mary and Gillingham challenge her opinion that a stone memorial makes no sense, Sarah gives it her all:

If it were a memorial service, then I might agree. But a stone edifice in the center of the green to remind us forever of death and a pointless war — what's the good of that? To say nothing of the waste of money...

Naturally, Lord Grantham packages an insult with decorum in an attempt to shut her up, saying "Forgive me, but you are talking nonsense." (God love Mrs. Crawley for chiming in with, "Forgive me, but I suppose she is allowed an opinion.")

The problem is that Lord Grantham is so certain that he's right, he simply says Sarah is not allowed an opinion, which is how it always goes when someone disagrees with the obstinate Lord of Downton (his world is more black and white than even his mother's, sometimes). But a lowly schoolteacher, and a woman at that, has no place in Grantham's hierarchy of worthy opponents — we all saw how much trouble he gave his own daughter Mary when she suggested they run the estate together.

Of course, Sarah didn't help matters by driving the knife harder into Grantham's wound by pointing out that "it's a pity they didn't want you on the committee. You put up a stout defense of their intentions." That was just mean (even if Grantham's snide response was childlike).

All this being said, I can't say I'm rooting for Sarah. She seems a bit mean-spirited with that last jab, but she is doing great things for the show: She's slowly bringing out the fight in Tom, after the Granthams sort of domesticated him like a pet, and she's dicing up things for the entire family by stirring the pot in all directions — not just Tom's.

I'm betting she'll be around more this season and while I think the romance between her and Tom is misplaced (not everyone needs to have a smooching buddy, folks), their friendship could go a long way for the writing and the outcome of Season 5.

More like this
Sandra Bullock, Girlboss Extraordinaire
By Matt Harkins & Viviana Olen
Kaley Cuoco & Tom Pelphrey Just Made Their First Public Appearance As A Couple
By Hugh McIntyre
The 'This Is Us' Finale Featured An Adorable Season 1 Jack & Rebecca Easter Egg
By Grace Wehniainen
Twitter Is In Tears After *That* Jack & Randall Parallel On 'This Is Us'
By Grace Wehniainen
Get Even More From Bustle — Sign Up For The Newsletter