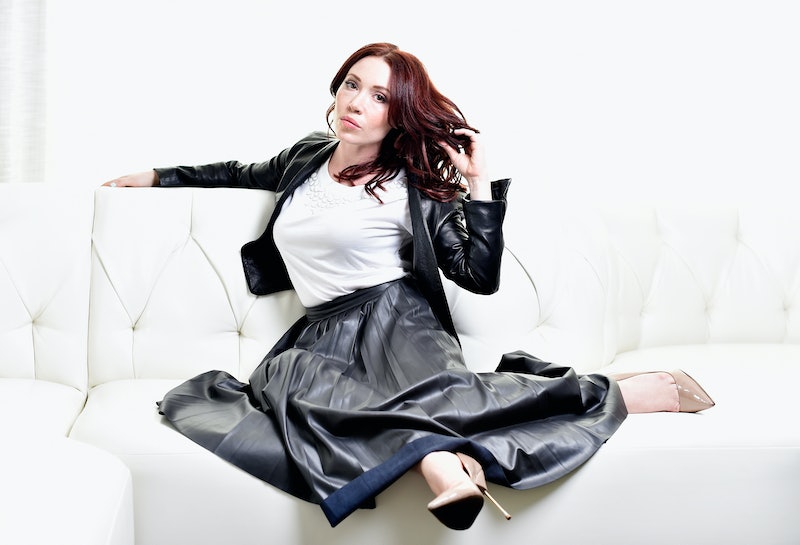 Chauffeur-turned-son-in-law Tom Branson on Downton Abbey deserves all of the love he can get after his beloved Sybil died in childbirth. Although not everyone may be in support of a new romance, he clearly is moving in that direction — so who plays Tom's teacher girlfriend on Downton Abbey ? Actress Daisy Lewis portrays Miss Sarah Bunting, the local school teacher who we saw piquing Tom's interest in Season 4 and who will return for Season 5. Of course, I wish Sybil was still alive since Tom and her were so lovely together, but Sarah is 100 percent better than the complete psycho maid Edna (who pretty much date-raped Tom). Although I find Sarah to be too harsh about the Crawley family's estate (which is sure to cause issues in Season 5), Sarah challenges Tom's thoughts on status and wealth (like Sybil did).

Now to most Americans, Lewis was not a recognizable actress when she first popped up on the show at a political rally that Tom attended. And after a series of Downton Abbeyesque meet-cutes, Tom finally gave into his feelings for her. Of course, the other Tom (Thomas Barrow, that meddling bastard!), had to mess with things between Tom and Sarah when he reported to Robert that he saw the two of them upstairs at Downton (she was just admiring the grandeur!). But it's looking like Sarah will be a significant character in Season 5, so let's check out what else Lewis has done before she was shaking up things at Downton Abbey.

In a role that some Americans may actually remember, Lewis was completely unrecognizable when she appeared on Doctor Who. She was in the episode "Gridlock" with David Tennant as the Tenth Doctor and Freema Agyeman as his companion Martha. In the above video, Lewis makes her appearance at 1:54 as the black Catkind driving a car in the fast lane. (You may also recognize Lenora Crichlow from the failed sitcom A to Z.)

From Time to Time

Lewis is familiar with the man behind Downton Abbey, Julian Fellowes. Fellowes directed the 2009 film From Time to Time , in which Lewis had a role. She wasn't the only person in Downton Abbey in the movie though — Maggie Smith and Hugh Bonneville also acted in the ghost story.

Lewis portrayed Saskia in the 2011 British indie film Lotus Eaters. Directed by the daughter of U2's manager, the film was shot entirely in black and white (super hip, y'all). And it dealt with the struggles of British over-privileged youths (so, kind of like Downton Abbey minus the drugs and time period).

In the above interview, Lewis says that she was attracted to her role of Danaka in Pusher because she got to "... take drugs, laugh at somebody's small penis, [and] get beaten up." Excuse me?! Carson would not approve! This 2012 British remake of a Danish film focuses on none other than a drug pusher (portrayed by Coupling's Richard Coyle) and focuses on a world far, far away from the land of Downton Abbey.

When Downton Abbey returns to TV on Jan. 4 (for us Americans at least), get ready to see a lot more of Lewis. And perhaps this British woman's résumé will continue to grow beyond Downton as well.

More like this
Here's How To Stream 'Downton Abbey: A New Era' & The New 'Downton' Channel
By Alice Broster and Sam Ramsden
Regé-Jean Page Spoke Out On His Rumoured 'Bridgerton' Return
By El Hunt and Maxine Harrison
'Stranger Things' Season 4 Volume 2 Trailer Teases New Episodes Coming July 1
By Grace Wehniainen and Gabrielle Bondi
The 'Ms. Marvel' Review Bombing Controversy, Explained
By Radhika Menon
Get Even More From Bustle — Sign Up For The Newsletter