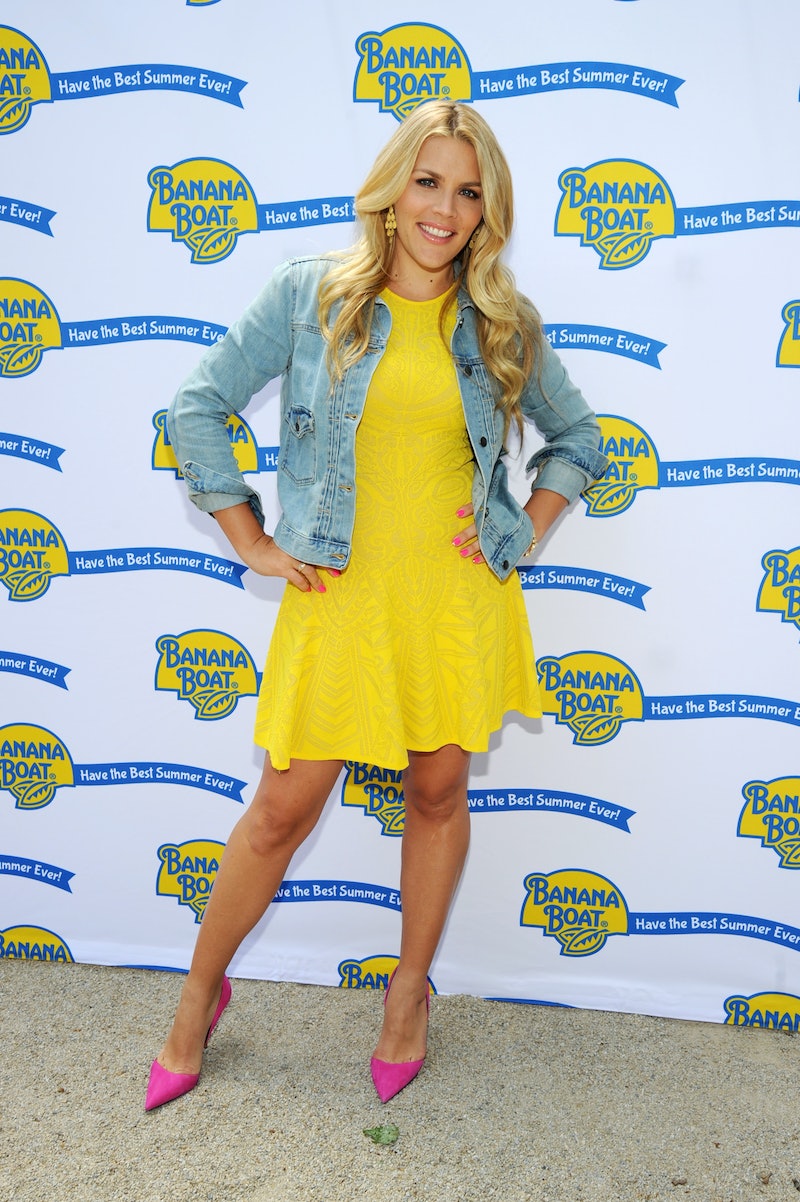 Busy Philipps really lives up to her name, as the actress has been occupied with filming the sixth and final season of the ABC-then-TBS comedy series Cougar Town. Philipps has played Laurie Keller, the fun-loving and wacky assistant of Jules Cobb (Courteney Cox), since the beginning of the series in 2009 and started the role shortly after she had her first child, daughter Birdie. Set to premiere on Tuesday night, the final season of Cougar Town finds Laurie pregnant, but this time around, it's only the character sporting a baby bump.

Cougar Town's Season 5 left off with Laurie and Jules' son Travis (played by Dan Byrd) expecting a baby, which means Jules is going to be a (gulp) grandma. But Philipps has been pregnant on set before — she was pregnant with daughter No. 2 Cricket Pearl as the show shot Season 4 in December 2012 and she gave birth in July 2013. But Laurie will give birth in Season 6, which was filmed after Cricket's birth. Philipps wasn't crazy about pretending to be with child once again. "Since I, Busy Philipps, was just pregnant in real life -- IRL the kids say -- I was a little bummed because I just spent half of season 4 hiding my pregnancy and then all of season 5 losing my baby weight on camera," she told CBS News. "I had to go back five weeks after giving birth and I'm not Gisele [Bundchen]!"

During Cougar Town's six-year run, Philipps own family has grown — and the cast has become her family, too. Here's a look the actress' family on and off the set of the TBS sitcom.

The Cast of Cougar Town

Over the past six years, the Cul de Sac Crew has grown close even off-screen — and Philipps has said that Cox has fostered that kind of atmosphere from the beginning. "We're people that genuinely like to hang out with each other," she told Movieline. "Courteney really fosters that atmosphere. Before we even shot the pilot, Courteney was inviting us all over to her house in Malibu for barbecues and pushing us to hang out socially."

And the actress recently confessed on Instagram that she's sad to see Cougar Town end its run. "n this business, you get used to saying goodbye," Philipps wrote. "But this was the closest thing I've ever had to a 'real' job. I've cried for the past 3 weeks. Not because I'm scared of what's next — I'm excited about that — but because this job saw me into my adulthood in a very real way. It's meant more to me than I can properly articulate."

Philipps noted on her Instagram account that she shot the Cougar Town pilot when her daughter Birdie was 5 months old in 2009. The 35-year-old actress gave birth to daughter cricket in 2013 and was happy to spend this past summer with both girls.

"I feel really lucky. I have the best job in the world," she told CBS News last June. "We don't go back to shooting 'til right after Labor Day. So, I'm a full mom all summer long. We're going to the beach. We have a couple of vacations planned.

Philipps married the director and screenwriter in 2007. You'll know Silverstein from the movies he's penned, which include The Vow and He's Just Not That Into You. Philipps and Silverstein married in a ceremony that guests thought was Philipps' surprise birthday party.

"When I showed up, everyone yelled surprise and Marc and I yelled it right back- since they had actually been invited to our wedding," she wrote on Instagram.