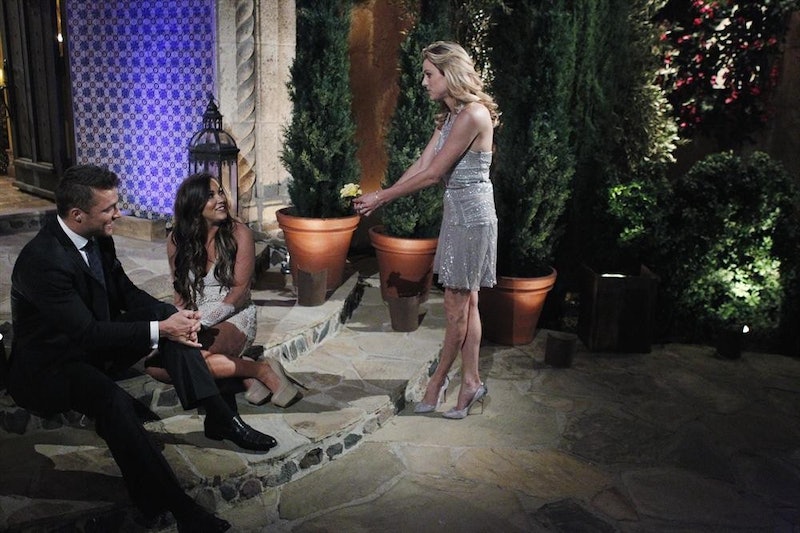 Every year on Limo Night, one Bachelor or Bachelorette contestant proves himself or herself to be "the crazy one" because she gets too drunk or cries within a few hours of meeting the man or woman of the hour. This season, that honor (distinction? award? I don't know what to call these people — they clearly want to be famous, yes?) goes to Ashley S. from Brooklyn who goes off about an onion for a good five TV minutes while footage of her shooing away another of Chris' Bachelor contestants with a yellow "rose" (it's a yellow chrysanthemum, but I'll let her have her fun) plays. But Ashley's antics are just a little too real. Ashley S. has to be faking it on The Bachelor , right? Update: Ashley S. spoke out on Women Tell All and proved she's kind of the best.

After all, the girl isn't drinking at all during the episode. (She's sipping on ice water — everyone with a vodka tonic was served a drink in a short rocks glass, rather than her tall one meant for less intoxicating beverages.) The easiest way to explain why Ashley would waltz up to Chris and another girl, offer her a yellow "rose" to get the hell out of here, then go on and on about onions like she's Shrek explaining ogre culture (don't pretend you haven't seen that movie, Ash), and finally pretend that the pomegranate she sees hanging in a nearby tree is an onion is that she was drunk and thought she was being cute — every woman who's ever been too drunk knows all too well that drunk "cute" is not real life cute. But, the girl was not drinking — at least not at any moment that the editors chose to show her.

Plus, this is no way to woo a guy and this girl listed Sex and the City as her favorite movie on her Bachelor profile, which means that even if she's clueless in real life, she's learned a little something from Ms. Carrie Bradshaw. She knows that acting like an insane person doesn't generally yield results (see: the Season 2 episode "Freak Show" in which Carrie ends up trying to pry open a box while juggling a cigarette and her shame, only to be found out by her totally normal future ex-boyfriend, who promptly dumps her).

I can't find any evidence of her personality on Twitter or Instagram (her Twitter is private and her Instagram captions consist of at-replies and blank spaces), which to me, suggests that she's not looking to hang around the show for a long time — most folks on these shows love to live tweet and take photos and show how on TV they are. Not Ash.

Finally, this girl lives in Brooklyn, and as a fellow Brooklyn resident, I'd prefer to think that this girl is having a laugh at the expense of The Bachelor and its producers, rather than the other way around. I'd also like to assume that no one is that hopeless when it comes to behaving around someone you might someday like to bone.