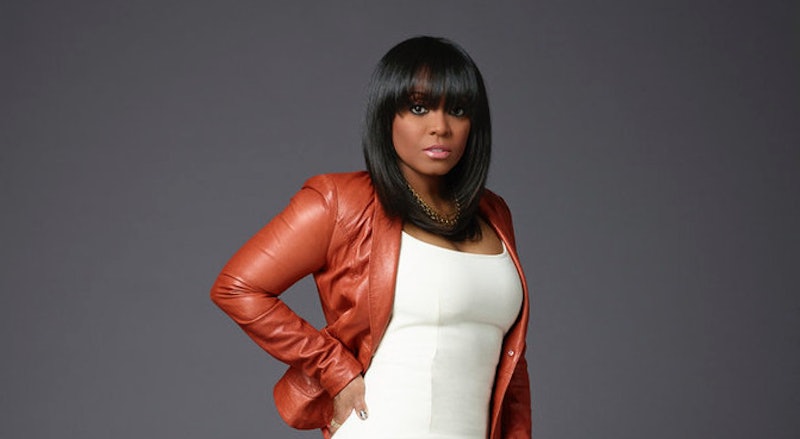 In what was surely an oversight, The Celebrity Apprentice Season 14 premiere included a rather uncomfortable moment when it came time to fire one of the contestants. The actress known best for playing Baby Rudy on The Cosby Show , Keisha Knight Pulliam, was asked to call up Bill Cosby for a donation for the premiere episode's challenge. When she refused to do so, she was fired for her unwillingness to call up her old co-worker. Seems pretty typical for this formulaic reality series, but when you compound the firing with the Cosby scandal — which, to be fair to Trump & Co., became a topic months after the episode was taped — it's just a little icky.

Again, this isn't NBC's fault, but, man, they could have warned us — a simple, "Hey, this episode discusses Bill Cosby, though it is unrelated to any recent news" would work. Instead, all of the sudden, here's Pulliam, being asked to contact Cosby to further her career, and she's being punished for saying "no." It's just a little accidentally creepy, however unforeseeable it was at the time of production.

The circumstances of Pulliam's refusal didn't add to the scandal — that would be a whole other can of worms, for sure. Pulliam simply thought that it would be rude to call up an old colleague she hadn't spoken to in years simply to get ahead in business (on a reality show). She hadn't spoken to Cosby since they attended the same event and she didn't feel it was right to expect him to help her now. Ask a business school professor and they'd probably say that anyone not willing to work their connections doesn't have what it takes to make it in the big leagues, so the firing in and of itself makes sense.

However, I just wish NBC would have done a little something to soften the scene — some careful editing or, as I mentioned before, a warning would have gone a long way in this instance.

More like this
Twitter Is Upset About The 'American Idol' Top 3 Results: "Who TF Is Voting?"
By Jake Viswanath
Stormi Just Walked A Red Carpet With Mommy Kylie Jenner & Daddy Travis Scott
By Hugh McIntyre
Everything We Know About Chèrie & Jessey’s Abrupt Exit From Bling Empire
By Alyssa Lapid
There's Plenty Of Drama Brewing To Warrant A 'Summer House' Season 7
By Brad Witter
Get Even More From Bustle — Sign Up For The Newsletter