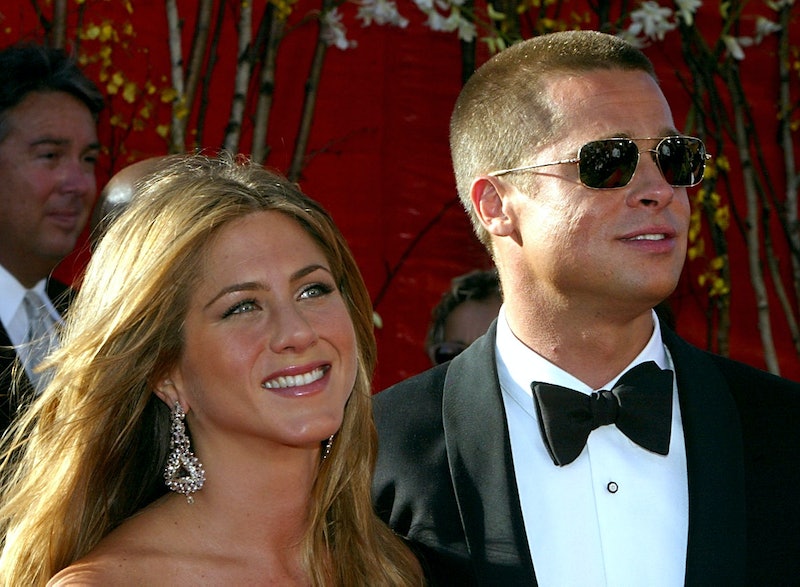 Did you know that Jennifer Aniston and Brad Pitt finalized their divorce in 2005? Did you know that 2005 was ten years ago? That's right. The formerly high-profile couple have been divorced for longer than their seven year long relationship (and five year long marriage) actually lasted, but you would never know that from the media. From celebrating when Aniston is nominated for a Golden Globe and Angelina Jolie isn't, to wondering how Aniston felt when Jolie and Pitt got married in a surprise ceremony in 2014, it seems like the world has collectively decided that the Aniston-Pitt-Jolie love triangle is just one of those undeniable facts of life like the sky is blue or Beyoncé is a goddess. However, during an interview on Sunday, Aniston revealed that she, Jolie, and Pitt have all moved on from that business — if by "revealed," you mean "was once again forced to state the obvious."

To reiterate, Pitt and Aniston finalized their divorce ten years ago. Since then, not only has Pitt gone on to engage in an equally, if not more so, high-profile relationship with Jolie, but Aniston herself has gone on to date actor Justin Theroux and even get engaged to him in 2012. So, why, exactly, are we still asking her about this?

"I don't find [the divorce with Pitt] painful," said Aniston to CBS Sunday Morning. "I think it's a narrative that follows you because it's an interesting headline. It's more of a media-driven topic." And, honestly, Aniston couldn't be more right. From Twilight's Team Jacob and Team Edward to The Hunger Games' Team Gale and Team Peeta to Archie Comics' Betty and Veronica, it seems that the most popular thing when it comes to romantic entanglements is getting to pit two people against one another in a love triangle. The enduring mystery of what exactly led to the downfall of Pitt and Aniston's relationship, and exactly how much of that downfall had to do with his amazing on-screen chemistry with Jolie, has captivated people to such a point that an entire decade can pass and these three names will still be brought up in connection with one another at some point.

This, despite the fact that Pitt and Aniston barely even talk to each other anymore. According to her, "We've exchanged good wishes an all that sort of stuff to each other, but it's not a constant thing." She even asked her interviewer pointedly if he still kept in touch with his ex-wife, since it had been his own divorce that he has used as a frame of reference for asking her this question. The thing is, Aniston could not seem more over this whole thing if she tried and it isn't even that she's angry or annoyed or upset that this keeps coming up. If anything, she seems just as bewildered as you might be if you were still answering questions in the present day about things you did a decade ago.

Quite frankly, as fascinating a media narrative as it might be, 2015 should really be the start of the American public moving on from this so-called love triangle just like the three people involved in it have. After all, it's gone beyond beating a dead horse and has now become beating a dead unicorn — we are harping on something that never existed in the first place. Worse, we're harping on it to the wrong person. After all, Pitt is the one who went from a high-profile relationship with Aniston to a high-profile relationship with Jolie. Why isn't he the one who has to constantly field these questions, instead of Aniston?

Still, it's admirable that Aniston can still manage to have such a good attitude about having to repeat the same answer to the same question for about ten years, even as she has to read headlines about herself that act as if this whole situation only happened yesterday or try to draw her into a competition with Jolie that never happened and will never happen. The important thing is that both couples, Aniston and Theroux and Pitt and Jolie, are happy. Whether or not the imaginary thread connecting Aniston to Pitt and Jolie will ever finally snap, allowing for different and thus more interesting stories about her, still remains to be seen.