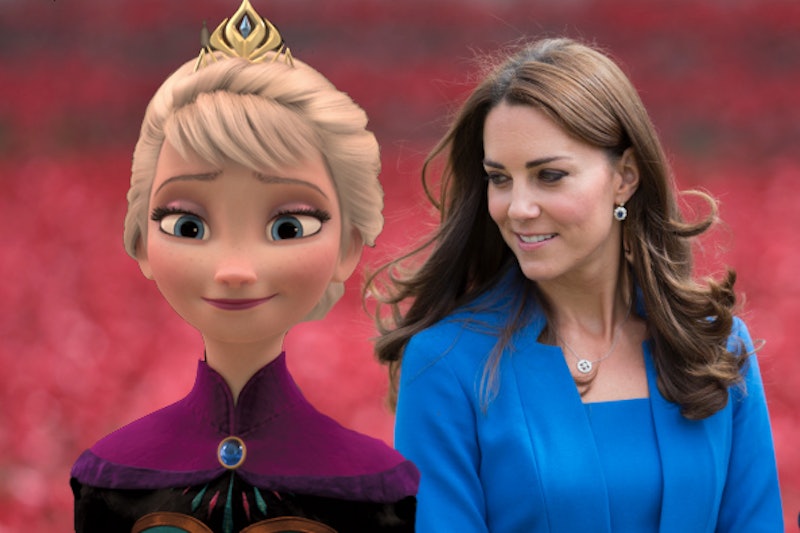 It has been over a full year since Disney's Frozen took the world by storm in Fall 2013, but the film is no less captivating even though people have finally stopped making all those "Let It Go" parody viral videos. (Thank goodness.) Queen Elsa of Arendelle is basically a cultural icon at this point, so it's just a given that she's going to be compared to other cultural icons. Sure, we can compare Elsa to Taylor Swift, especially given that Swift's 1989 knocked Frozen out of first place for best-selling album of 2014, but Swift just isn't, well, royal enough. Instead of comparing Elsa to Swift, I think we should be comparing Elsa to our own popular future queen, Kate Middleton. After all, who can understand the burden of royalty better than a member of the royal family?

Of course, Middleton and Elsa are not without their differences. After all, Elsa was born heir to the throne of Arendelle while Middleton married into the British line of succession. In addition, Middleton is a happily married mother of almost-two children while the only true love Elsa wanted or needed in her life was that of her younger sister, Anna. However, their lives and journeys still parallel one another in many ways, from the pair of them being great interior decorators to them both being noteworthy fashion icons without even trying. Elsa's motto of "conceal, don't feel," might have gotten her in trouble over the course of Frozen, but it's an attitude befitting a queen and one that Middleton exemplifies in her own every day life. It's not like they both don't know when to let it go.

Basically, if Elsa was a real monarch, there isn't a single doubt in my mind that she and Middleton would be great friends, who could bond over everything from having energetic younger sisters they adore to the pressures of trying to run a kingdom while trying to keep the messy details of their private lives out of the tabloids. But don't just take my word for it. Check out our Bustle Venn below to see where the Snow Queen and the Queen-to-Be overlap, where they differ, and why even their differences are proof they'd have loads to talk about over Sunday tea.

More like this
Kate Had A Solution When Tom Cruise Broke This Royal Rule At The 'Top Gun' Premiere
By Frances Stewart
Taylor Swift, Kerry Washington & More Speak Out On Uvalde Mass Shooting
By Jake Viswanath
Taylor Swift Knew Hayley Kiyoko & Becca Tilley Were Dating 4 Years Ago
By Grace Wehniainen
Joe Alwyn Reacts To Taylor Swift Earning An NYU Doctorate In A Rare Interview
By Jake Viswanath and Nicole Pomarico
Get Even More From Bustle — Sign Up For The Newsletter