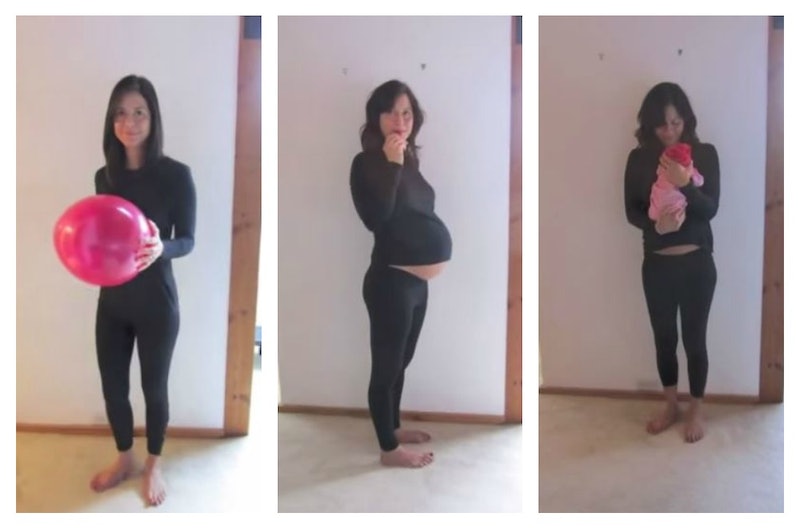 I’m still a long way off from raising kids of my own, but if and when the time comes, I hope I have the presence of mind to think up a creative way to announce the whole thing. Case in point: This pair of new parents, who took a photo of the mother and a balloon every day for nine months to track the development of the pregnancy and eventual arrival of their child. Talk about the time lapse birth announcement to end all time lapse birth announcements, am I right?

To make the video, the parents snapped a shot of the young mom in the same outfit and in front of the same wall every single day throughout the course of the pregnancy — but with a fun and whimsical twist. Early on in the video, the mother produces a red balloon, which she then seemingly inhales (so that's where babies come from!... Or something). As the balloon shrinks, the mother’s belly grows; she turns her back to us; and when she turns back around to face us, she’s holding a tiny little bundle of joy. The effect is something like a piece of stop-motion animation, and it’s so. Stinkin’. Cute. Seriously. Here, check it out:

Adorable, no? All together now: Awwwwwwwww!

It’s worth noting that although the video has only started going viral over the past few days, it’s actually about three years old. Crazy to think that that little girl is walking and talking now, isn’t it? Speaking to the Huffington Post, the mother said, “We liked the idea of the balloon because it was simple and had a childlike charm. And, honestly, neither of us had ever done stop motion before and it was the only idea we had that we thought we could actually pull off.” They also saw the video as something they could give to their daughter when she got a little bit older, which just makes the whole thing even cuter.

Can’t get enough of the adorableness? This video isn’t the only squee-worthy, time lapse birth announcement video we’ve seen recently; back in March of 2014, musician Tom Fletcher and his wife, Giovanna, announced the arrival of their son, Buzz Michelangelo, in a similar video titled “From Bump to Buzz”:

This post has been updated to feature the original version of the video at the request of its creators.

More like this
The Rarest Baby Names In The U.S., According To The Most Recent Data
By Mia Mercado and Emma Carey
Meet The Disney Imagineer Bringing 'Guardians Of The Galaxy' To Epcot
By Charlie Mock
8 TikTok Pasta Recipes To Try Out At Home
By Emma Garza
The True Meaning Behind Each Hand Emoji
By Bustle Editors and Emma Carey
Get Even More From Bustle — Sign Up For The Newsletter