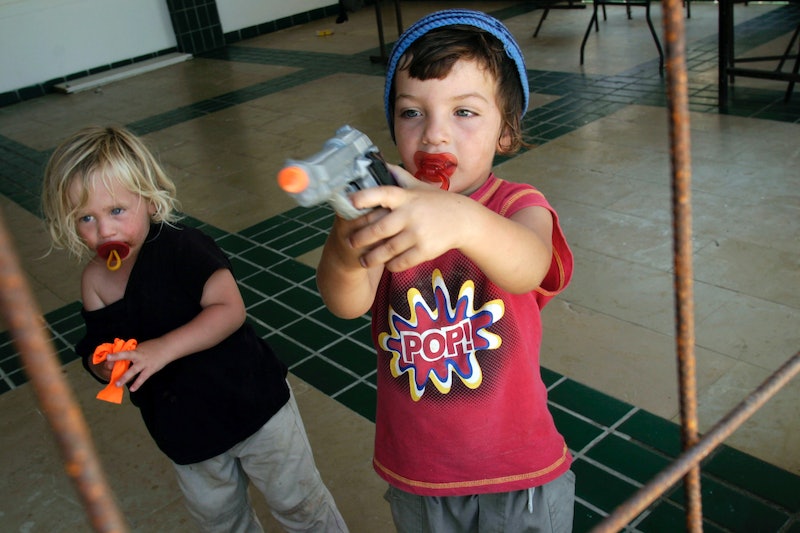 This is precisely the kind of story we all sort of wished would stay in 2014: On Sunday evening, a man with a replica gun was fatally shot by San Francisco police, after appearing to challenge officers with the pellet-firing replica, according to the SFPD. The suspect, whose name hasn't yet been released, was rushed to the hospital for emergency care, but he ultimately died there.

Officer-involved shootings of unarmed citizens have loomed large in the national consciousness of late, with the twin tragedies of the John Crawford and Tamir Rice shootings in Ohio setting the pace. Both the 22-year-old Crawford and 12-year-old Rice had realistic-looking pellet guns on them when they were killed, but the lethal action was nonetheless highly controversial in both cases. While a grand jury declined to issue any indictments over Crawford's death, the legal outcome of Rice's killing is still pending.

There are some crucial facts which separate this case from those, however. Foremost among them perhaps, is the unavoidable issue of race — both Rice and Crawford were black, while the 32-year-old man slain by the SFPD was reportedly white.

Furthermore, the alleged circumstances of his death present a picture worlds apart from those of Crawford and Rice. According to SFPD spokesperson Albie Esparza, the man was spotted by police inside a non-public, restricted police parking lot. After being was told to leave, he walked to the entrance before turning to confront the officers, Esparza told NBC News, reaching into his waistband to draw out the fake gun.

He also reportedly attempted to interact with SFPD officers earlier in the day, questioning a pair who were responding to a domestic violence call about what type of guns and ammo they used, and whether they'd ever shot someone.

Obviously, this is the accounting of events that the department is putting forward, though recent events have given us all a crash-course in the perils of taking police accounts of officer-involved shootings as absolute fact. In the Tamir Rice shooting, eventually released surveillance video betrayed large inconsistencies between what the Cleveland Police Department claimed, and what actually happened. This was also true of the police shooting of St. Louis-area resident Kajieme Powell.

Cases like this one have also spurred a response from local legislators, aiming to further regulate the sale and use of these sorts of realistic-looking pellet guns. The Rice shooting was the impetus in Ohio, where Rep. Alicia Reese has authored a bill mandating that such fake firearms be brightly colored, or feature prominent fluorescent strips. And as it happens, that bill is actually based on similar legislation passed in California last year. It hasn't yet been reported whether the pellet gun the man had was colored in observance of this law or not — it's easy enough to paint a brightly colored gun black, after all, and the hyper-realistic models are still available internationally and in other states.

In the case of the Rice shooting, the orange tip intended to expose the gun as fake had been removed, though as video of the shooting illustrated, it's profoundly unclear that the officers could even have seen such a thing before opening fire.

Speaking to NBC News, Esparza claimed that this circumstance was still hard to figure, and that the department wasn't yet sure of the man's motives.

We don't know his motive or why he challenged the officers or approached them in the first place. It was very erratic behavior by the suspect, very unusual.