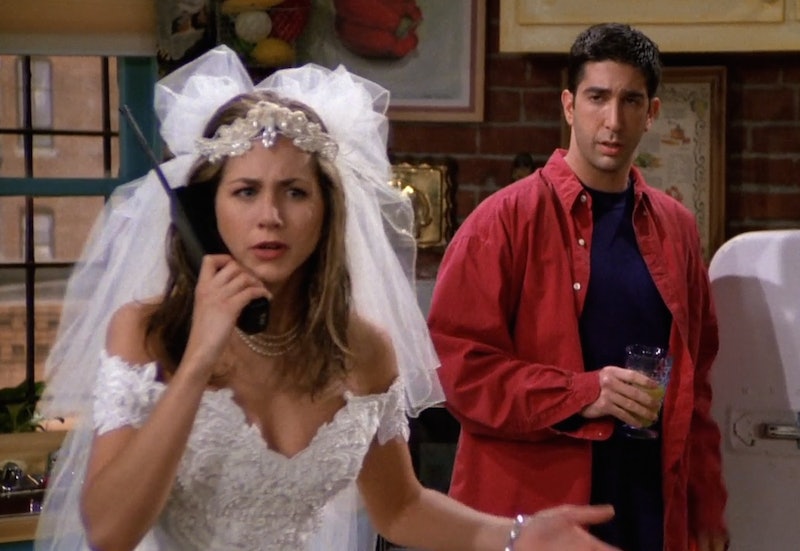 Friends was one of those inescapable shows that basically defined the '90s for an entire generation... except for me. Yes, that's right, prior to Monday, January 5, 2015, I had never seen a single episode of Friends. I couldn't even name the main cast, beyond Ross and Rachel. I didn't get the jokes, I barely understood the references, and I had no idea what Central Perk was until it was the first thing emblazoned on the screen in the pilot episode, "The One Where Monica Gets a New Roommate." Because, you see, Friends came to Netflix in January 2015, and I finally had my chance to watch the entire series from the beginning, on my own time and at my own pace. And let me answer the real question on everyone's minds. How long did it take me to start 'shipping Ross and Rachel? Less than five minutes.

These five minutes were not chronological, mind you. Chronologically speaking, Ross and Rachel held no fascination for me until the end of the pilot. You see, I am the kind of person who gets sick of things that are continually shoved in my face. I stopped listening to the radio because it kept playing the same ten hit songs over and over again. I narrowly avoided hating Frozen by getting in to see the movie before the hype struck. I refused to watch Friends even after it entered syndication, because everyone wouldn't shut up about it. I don't care if that makes me a hater; it's just how I am. And "The One Where Monica Gets a New Roommate" is about as subtle as a punch to the face about the couple you're supposed to root for on this show.

Ross and Rachel are introduced on two parallel journeys. Ross crashes back into the lives of his younger sister Monica and all of her friends when his wife leaves him for another woman. When he declares that he wants to be married again, enter Rachel, wearing in a wedding dress, having pulled a runaway bride on her fiancé Barry. Just in case you didn't get it then, although I don't know how you couldn't, a later conversation has Ross talking to Chandler and Joey about how he has no idea what girl he could ever find it in himself to ask out — and the scene cuts to an equally despondent Rachel staring out the window. I can't tell you how hard my eyes were rolling by this point. I don't need to be told what to 'ship. I can arrive at that conclusion all by myself, thanks.

However, the pilot episode ends with a poignant scene that casts all of the above in a new light. Rachel and Ross have an actual conversation. One in which he admits that he had a crush on her in school (she knows), but he figured she just thought of him as Monica's geeky older brother (she did). One in which he says he might ask her out, and a smiling Rachel says she'd be okay with that. One in which the two of them are left looking adorably struck by one another, leaving with smiles from an exchange that, more than the heavy-handed Meet Cute, more than the show "hints" that were more like anvils, felt more real and special and sweet than I could have ever imagined.

And that's when Friends finally won me over. I had chuckled at the sitcom jokes, guffawed at the '90s hair, and yawned my way through Monica's sitcom romance troubles — but that emotional realness was something that was missing from the rest of the pilot. Yes, it was amusing, but it wasn't captivating, wasn't persuasive, wasn't addictive until the moment Ross and Rachel decided to split the last Oreo. Because that was the moment — that is the moment — Friends becomes more than just a generic sitcom that everyone won't shut up about. That is the moment Friends becomes real. That's the moment I sat up and screamed, "I 'SHIP IT!"

This is where I have a leg up every Friends fan who watched the show religiously every week when it originally premiered. The show is over. All ten seasons have premiered, been rerun, and are now on Netflix. I can slow it down, speed it up, skip around, and jump onto the Internet to find an entire pre-existing community of Ross and Rachel fans who are prepared to relive these feels with a first-timer. So, in a strange way, I'm now thrilled that I waited until I was 24 years old to watch Friends for the first time. I know how this story ends, I know how much it will hurt to get there, and I know it won't disappoint me. And this story, their story, is just the very beginning of what Friends has in store for me.