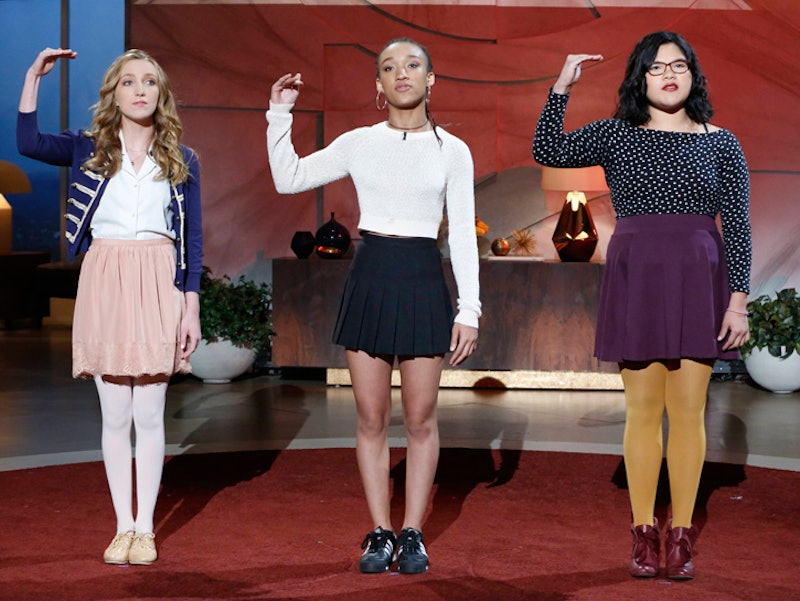 Belissa Escobedo, Rhiannon McGavin, and Zariya Allen recited a jaw-dropping poem called "Somewhere in America" on the since-canceled The Queen Latifah Show. The young women, part of the L.A.-based nonprofit Get Lit, called to attention the information passed along unintentionally in this country's classrooms. Spoiler alert: it gets pretty real.

The trio of teenage girls start the poem ominously: "The greatest lessons you will ever teach us, you won't even remember." From there, they jump into fairly controversial, dark topics like rape, race, gun control, socioeconomics, and censorship. Emotions rage so hard in the three-and-a-half-minute piece, occasionally you can spot a small vocal crack in the performance, but that just lends more validation to the truth they kept spouting. "Somewhere in America," ushers in the hard-to-hear stuff, "Women are killed for rejecting dates, but God forbid I bring my girlfriend to prom." Another: "The preppy kids go thrifting because they think it sounds fun. But we go 'cause that's all we've got money for."

The episode, also guest-featuring feminist pioneer Gloria Steinem, was meant to highlight female empowerment. However, the young voices seemed to lend strength and raise serious questions across the board, regardless of gender identity. Get Lit says they hope to "change the world, one word at a time." We believe, given this performance, that's entirely possible.

Escobedo, McGavin, and Allen have performed their poem in front of thousands of people, including a coveted opening slot for a sold-out John Legend concert at the Hollywood Bowl last fall. They cite real-life, personal experiences and Jay Z's social commentary as inspiration for the piece. "I think poetry is the best way to express emotions..." McGavin says, "It’s an amazing way to help people, especially teens." Hear hear.