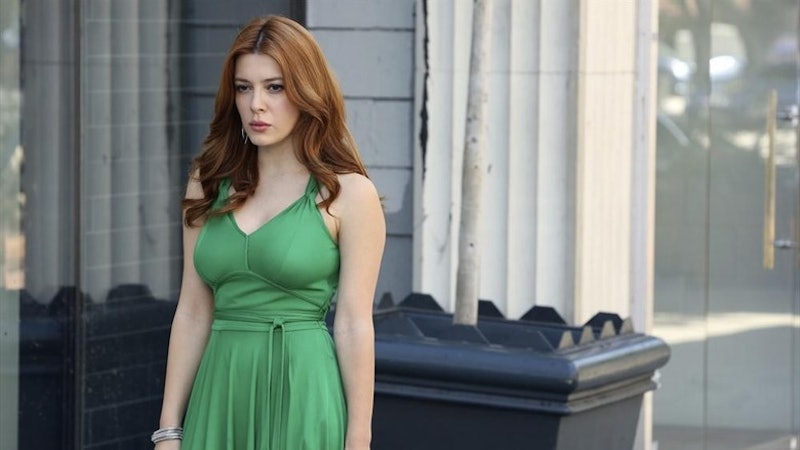 Attention Hamptons, there's no way things are going to calm down on Revenge anytime soon now that we know Louise Ellis will be in town for a while. On Monday, it was announced that Elena Satine was promoted to a series regular on Revenge , assuring that the Sunday night ABC show won't lose any of it's dramatic flare anytime soon. Satine, who started on Revenge during the current season as Louise Ellis, was introduced to us at the mental hospital Victoria was at, as a new roommate. Louise was pretty mysterious from the beginning, there was definitely a lot we didn't know about her, and honestly, now that we are half way through the season, I still don't know what her deal is.

Louise has caused a lot of ruckus since she showed up in the Hamptons, and has somehow managed to affect the lives of almost every character in some way (whether it be small or big). So now that we know Louise will be sticking around for a while, what does that mean for the other characters of the show? Will they be in danger, or is Louise harmless (just kidding, no one is harmless on Revenge).

I hope for Louise's sake that Emily and her don't cross paths, but if Louise is now a series regular, there is a chance that Victoria could get into her ear and make Emily mortal enemy number one in Louise's eyes.

Jack is the only one out of the leading men that Louise hasn't really bonded with (besides David Clarke, but they'll probably never hang out, right?). If things go as they usually do on this show (relationships are "take one down, pass them around" style) then it is only a matter of time until something happens with them.

Victoria can use Louise to her advantage, since it seems like Louise has an incredibly unhealthy obsession with Victoria. If Victoria plays it right, she could get a minion out of Louise.

I know this is Nolan's time to be a mentor to Louise and make sure she stays on the good side, but he really shouldn't trust her. If she's going to be hanging around him, I highly suggests he gets one of his super intelligent, super secretive cameras on her STAT, so he won't have any surprise attacks on him.

Margaux has a lot on her plate, dealing with a pregnancy and also the death of Daniel, but she really should keep an eye out for Louise. I don't think she wants to trust someone who tried to cook her in a sauna.