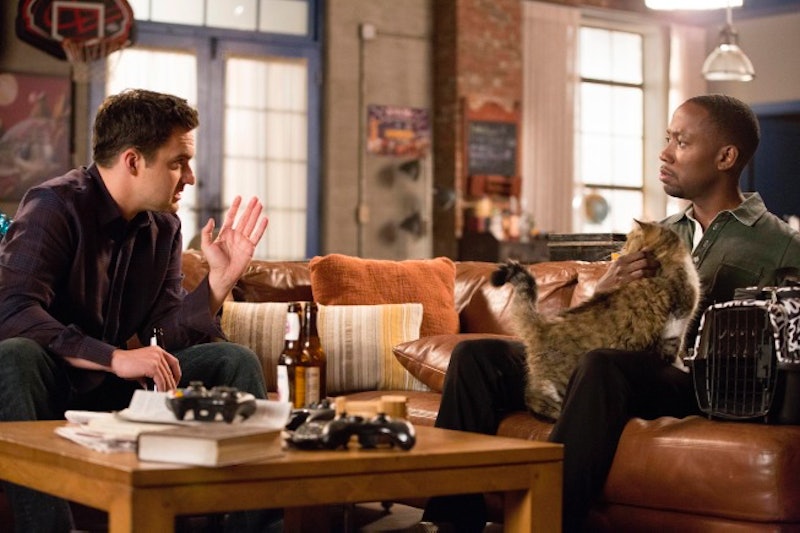 Nick and Jess' relationship is proceeding full-squee ahead. He's sculpting her bangs with saliva; she's fondly addressing him as "sex partner." At her new job, Jess hopes to infiltrate the school's clique of cool teachers (including The Office's Angela!), but it's not going well. "You have owl eyes," Angela informs her derisively. Nick insists on coming to her rescue. He storms the teacher's lounge with free school supplies, offering to comp drinks at his bar. Progress!

Winston is watching Daisy's cat, Ferguson, as part of his campaign to make her his exclusive girlfriend. This kitty is a Scottish Fold, the cutest cat varietal in the known universe. But when he stops by her apartment, Winston discovers that Daisy—Brenda Song, you deserve so much better than Dads—has another dude over at that very moment, for the purpose of sex and sex-related activities. Though she half-heartedly accepts his proposal of monogamy, he leaves brokenhearted, with Ferguson in tow.

But now, he doesn't feel much like cat-sitting. A man scorned, he'd prefer to do some... cat-murdering. "An eye for an eye, a cat for a cat," he tells Nick. ("What's the other cat?" "My heart.") Side note: three gold stars to New Girl's writers for allowing Wilson go full-on crazy lately.

At the bar, Nick walks Jess through overcoming her chronic uncoolness, a process that primarily involves drinking heavily with her fellow teachers. The outing ends, as all good nights do, with Jess dancing barefoot in a toilet bowl while belting 4 Non Blondes' "What's Up?" She's finally earned a place among the Plastics.

Winston considers a shovel, ninja stars, and even a custom-made miniature noose as murder weapons before finally coming to his senses. He accepts that things are over with Daisy, but decides to keep Ferguson for himself. As a devoted cat owner, I'd expect to be unnerved by this plot point, but I'm too thrilled by the possibility of a permanent feline cast member to give a litter-encrusted poop.

Schmidt's excited about his new office—a perfect two-thirds replica of Don's from Mad Men—but less excited about the office party that's brought his simul-girlfriends Cece and Elizabeth (Emmys MVP Merritt Wever) together. Bizarrely, circumstances conspire in Schmidt's favor, and the ladies improbably fail to discover that he's two-timing them. He actually seems the slightest bit disappointed—he can't rely on fate to decide this one for him.

The cool kids (well, grown-ups) invite Jess to join them in breaking into the hapless principal's backyard and putting their butts in his jacuzzi. Despite the fact that trespassing on private property is a liiiiittle bit felonious, she dismisses her new boyfriend's misgivings—and promptly gets stuck, alone, on the wrong side of principal's backyard fence. But once again, Nick comes to her rescue, scrambling over after Jess. He even sticks around when the principal himself appears in his swim trunks and invites them in for a soak. That's love, people.