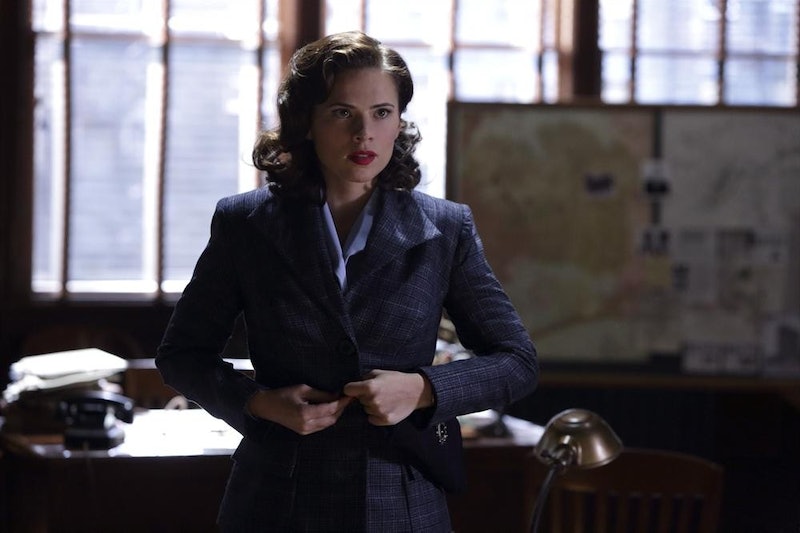 For anyone who's solely tuning into Agent Carter for the playful will-they-won't-they relationship between Peggy Carter and Captain America, I hate to be the one to break this to you, but it doesn't happen. When the show picks up, after the events of Captain America: The First Avenger, Steve Rogers is still very much frozen in ice. So any romance between the two of them is, well, impossible. However, we do know that in the Marvel Cinematic Universe, Peggy leads a full and wonderful life without Steve, gets married, and has children. So if she's not marrying Captain America, who will Peggy Carter marry after Agent Carter ? Peggy's backstory has changed a little from the comics to the television screen. But, it's not like suddenly Peggy is going to have a huge love affair with Steve Rogers, and I'm thankful for that (because it only makes their further character development without one another even better). In the comics, Peggy actually never marries — she has a bunch of relationships, but none of them ever come to marriage. However, a much older Peggy talking to Steve in Captain America: The Winter Soldier suggests quite the opposite.

Peggy, in 1953, gives an interview about Captain America, which is what we see being played in the Captain America exhibit at the Smithsonian (which doesn't exist, because I asked). In the interview, Peggy is talking about how Steve saved the man who would later become her husband, which suggests that he was part of one of the groups that Steve freed during the war. But doesn't give a name and there are no identifying pictures. Even everything on Peggy's nightstand — with the pictures of her family — leaves everything suspiciously vague. It's just her and her children:

Since there's no comic basis to go off of, Peggy's husband could be anyone. Agent Carter producer Michele Fazekas told reporters at Comic-Con that the series would address — or at least tease — the identity of Peggy's husband. "We're aware that's a question that people are going to ask, and we will certainly hint at different options," she said.

So who could it be? The internet seems hellbent on the idea that it's Howard Stark. Let's shut that theory down right now. No no no, Howard Stark is not the love of Peggy Carter's life, and Peggy Carter is not Iron Man's mom. Seriously, think about that for a second, and how twisted it would be. Also, after three Iron Man movies, two Captain America installments, and one Avengers, that little plot point probably would have been brought to life by now. It's not going to happen.

Whoever her husband is, it'll be exciting to see their relationship slowly blossom, and Agent Carter seems more than prepared to address that missing piece of information. I can't wait to learn more about Peggy's both professional and romantic histories.