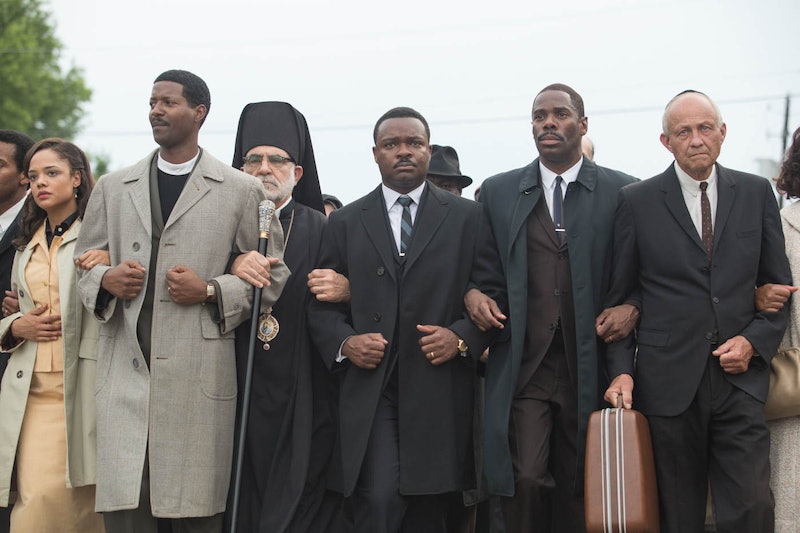 If you take a look at this latest round of Producers Guild of America Award nominations, you’ll find an unsurprising batch of titles. Not necessarily deserving, but certainly unsurprising. You’ll find The Imitation Game, an admittedly entertaining and sociopolitically dense true story that chickens out in the delivery of the principal conceit — the all too recent persecution of homosexuality — that makes Alan Turing’s a tale so important to revisit. You’ll find The Theory of Everything, an uninspired bore that eschews inclusion of all available background that might make its central character, astrophysics pioneer Stephen Hawking, interesting, settling instead for a rote retread of the biopic steps. You’ll find American Sniper, a morally vacuous slog that claims to tamper in the complexities of warfare while ultimately celebrating American jingoism (and relegating opponents to savagery). No “awards friendly” 2014 movie, save maybe for Unbroken — justly absent among the PGA nominees — paints in broader strokes than American Sniper.

What you won’t find — the first ounce of surprise we’re grafting here — is Selma, an excellent piece of film, an important element of modern conversation, and an Academy Awards favorite by anyone’s measure. But not a Producers Guild of America Award nominee, for whatever bizarre reason.

Hitfix makes mention that Selma, like fellow absent party Interstellar, did not make screeners available for PGA consideration, which more than likely contributes — though does not excuse altogether — the film’s failure to make the cut. Even if this is the sole reason for the lack of nomination, when it comes to a movie like Selma, the conversation can’t simply stop there.

What we have in Selma is, even if not necessarily the qualitative champion of 2014’s cinematic output (though many would contend that it ranks high in that regard), easily one of the most important — if not the most important — movie to hit theaters this past year. Though an illustration of the American South in the 1960s, it echoes with tremendous horror the very year through which we have all just trudged. A year of morose racial injustices on the part of our country’s judicial system, and one of tireless efforts by the American people to rectify the aforesaid. While most historical drama films about subjects of the sort allow for a sense of gratitude for the distance the viewer is inclined to feel between him or herself and the onscreen atrocities, Selma is not in the business of comfort. The movie is a wholly effective reminder that we are living in a times that requires the same kind of passion and will as the United States once saw in Martin Luther King Jr.

Selma’s significance circa 2014 should be a no brainer. And with its artistic merit almost universally accepted, it’s absence on a list like the PGA Award nods — the most accurate predictor of the Best Picture Oscar nominations of any other major awards organization — the negligence of its oversight feels like a rejection of the importance of its voice and message. Especially in light of the other nominees on the table.

The most egregious of the lot is American Sniper, a patron of themes like unconditional patriotism and bullhead masculinity. To call this bout of high-volume monotony a movie worthy of qualitative praise is curious in its own right; to call it more deserving of public attention than a picture like Selma is amazing.

Similar themes are explored in the significantly more interesting yet still powerfully boring Foxcatcher, which matches American Sniper’s focus on the military corner of the portrait Americana to the likewise brazen territory of capitalism. “The American dream.”

The latter concept finds home in two more entries on the PGA’s list: Birdman, taking form in modern celebrity culture, and Whiplash, in the entitled pursuit of artistic grandeur that you’d find uniquely in American youth.

All very American stories, as we’d likely identify. Though stories about a specific people’s America — those bequeathed with every opportunity imaginable. Those whose only enemies, as seen through the characters of Bradley Cooper, Channing Tatum, Steve Carell, Michael Keaton, and Miles Teller, are themselves. Those who have the luxury of being their own enemies, as the world and society have no intent on playing such a role.

While the stories within The Imitation Game and The Theory of Everything can’t quite be labeled as such, the delivery of their narratives do find peculiar form. Alan Turing’s destruction at the hands of the British government, motivated by his homosexuality, is a feature barely attended to in The Imitation Game, allowing his own emotional unavailability to stand as the chief antagonist in the film. Likewise, Stephen Hawking’s groundbreaking scientific work isn’t the main drive of The Theory of Everything, but the duality of his disease and marriage, with Hawking at times playing the “complicated antihero” whom we’re charged with rooting to work through his harsh fate to become a better man.

Two additional nominees, Gone Girl and Nightcrawler, play with the American media’s addiction to extremity and chaos (the former, too, has no small share to say about gender politics). Wes Anderson’s The Grand Budapest Hotel, while farcical in nature, is an eager embrace of its bleak, historically colorful backdrop of pre-World War II Eastern Europe. And Boyhood is as existential, internal, and personal as any movie in recent years can get. This collection of four stands separate from those categories above — Gone Girl speaks alone about women’s issues; Nightcrawler is less about a man’s drive for success than it is about that toxic drive personified; The Grand Budapest is really more about the cinematic world than it is the real one; and Boyhood… yes, I’m sure some could call it a myopic vantage point that only a small share of white, privileged, male Americans have known, but that is to deny the movie its embrace of the very idea of living. Nonetheless, it’s a group that wants desperately for the company of Selma.

In a vacuum, all stories described are valid material; several of the nominated movies actually do wind up rather interesting and entertaining. But to deny among this monochromatic, single-minded slate a place for Selma, which tells a different story about different people dealing with different problems that we all very much need to start paying attention to, is… well, it’s pretty damn disturbing.