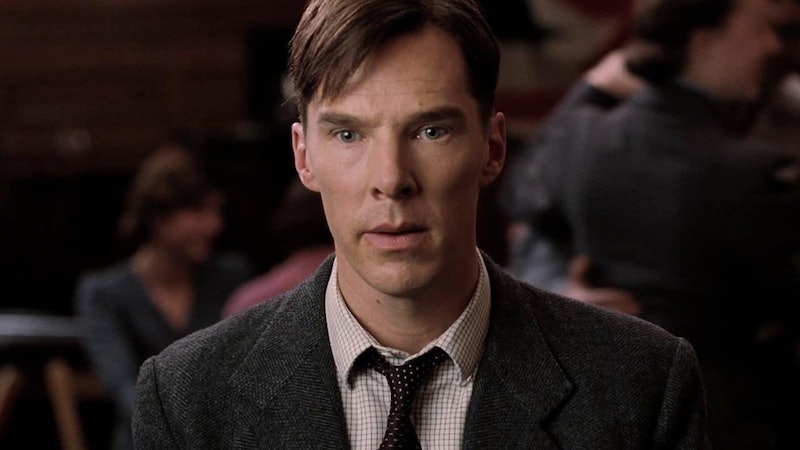 Benedict Cumberbatch is the man of the hour; even Jon Stewart has a schoolboy crush on him. His new film, the highly, highly anticipated Imitation Game, debuts on November 28. The Imitation Game stars Cumbarbatch as another British genius, Alan Turing, one of the most prominent mathematicians and computer scientists of the 20th century. Turing helped the British Armed Forces crack the Nazis' Engima Code during World War II. And to pay him back for his efforts, he was... later put on trial for his homosexuality. Not that cool, England. So The Imitation Game is obviously a historical suspense film, but how many of the details are true? Just HOW based on a true story is this Imitation Game ?

It turns out, it's pretty true to life, but many of the smaller details are unknown. The screenplay for The Imitation Game was adapted by screenwriter Graham Moore from the biography Alan Turing: The Enigma by Andrew Hodges. As Moore himself said of the brilliant, tragic Turing who eventually committed suicide after being convicted for homosexuality: "His life was a puzzle. His life was so burdened by secrets. We were trying to solve Alan Turing." Early reviews of the film seem to confirm that, to an extent, The Imitation Game does solve some of Alan Turning; at the very least, it certainly celebrates him as the hero he is.

Cumberbatch is the perfect choice to play Turing, an awkward, out of place and sometimes cold man; but how could such a genius with such a heavy secret about his identity be anything but removed and cold? According to Entertainment Weekly, the film does a great job of highlighting Turing's life of secrecy and privacy through the use of flashbacks:

Graham Moore fleshes out his character first by flashing back to Turing's boarding-school crush on a fellow student who showed the picked-on loner compassion, then by leaping forward to Turing's 1951 arrest for indecency.

The movie chronicles the major, moving events in Turing's life that ultimately changed the world. Sarah Stewart of the New York Post explains how Turing cracked "the code of the German machine called Enigma, which the Nazis used to send daily encrypted messages about war activity. To the initial doubt of his team, who toiled away deciphering a code that changed daily, Turing constructed a machine that would break the code every day. His success was hailed as one of the main reasons for Britain’s victory."

That said, Keira Knightley, who plays Joan Clarke, Turing's close friend to whom be becomes engaged only to break it off once revealing he's gay, admitted to the Huffington Post that there are "a lot of inaccuracies."

As far as her relationship with Alan, they were engaged. They were great, great friends. She was at the center of the breaking of the Enigma Code ... There are a lot of inaccuracies in the film as to life. What was actually said, and the reasons that they actually got engaged, I think are slightly different than the film ... But unfortunately you’ve got two and a half hours and what you're doing is trying to tell a bigger story, so you have to pick and choose. I think what we’re trying to get to is the essence of what it was.

As with almost all dramas that are based on true stories, there are some filmmaking devices that are added to tell the story. While Turing's relationship with Clarke took liberties, ultimately, the story of Turing's accomplishments in the tech and code-breaking field unfold truthfully.

The film also examines the tragedy of the end of his life, when he was convicted for indecency and then had to choose his sentence: jail, or chemical castration. Though much about his personal life may not be known, for these two historic events, Turing is forever famous. The Imitation Game is bound to be in the Oscars race.

More like this
Letitia Wright's Aisha Encourages A Vital Conversation Around Immigration
By Maxine Harrison
Keke Palmer Paid Tribute To "Other Half" Darius Daulton After Announcing Pregnancy
By Jake Viswanath
Yes, That's Lindsay Lohan's Sister Singing In The 'Falling For Christmas' Movie
By Radhika Menon
Keke Palmer Finally Showed Angela Bassett Her Famous Impression Of Her
By Stephanie Topacio Long
Get Even More From Bustle — Sign Up For The Newsletter