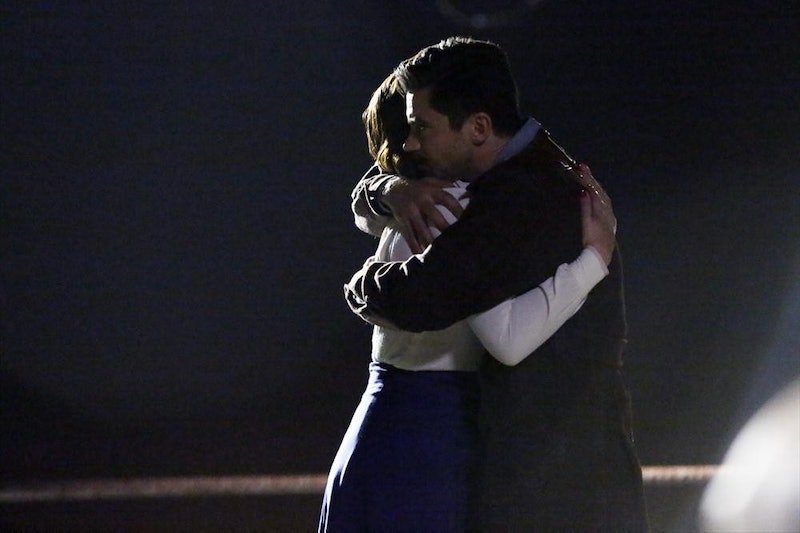 An entire fandom can be born from merely a glance between characters. Out-of-canon relationship pairings have existed long before Tumblr or any other internet platform where people can trade art and racy fan fiction. Kirk/Spock, anyone? So, it doesn't surprise me that there are a lot of fans clamoring for a relationship between Peggy Carter and Howard Stark on Marvel's Agent Carter . I totally get it. They're attractive, have great chemistry, and are endlessly fun to watch. But that pairing, while interesting, doesn't have much hope of appearing on Agent Carter for several reasons.

Peggy & Howard Don't Get Together in the Comics

If you only pay attention to Marvel's cinematic universe, you probably consider Peggy Carter a very important, albeit underused, character. But in the comics, her role is relatively minor. Yes, she factors into Captain America's WWII story and had a brief relationship with Steve Rogers. But Peggy doesn't have a huge impact on Steve or the Captain America mythos the way she does in the films. It's her niece Sharon Carter who factors heavily and is a divisive figure amongst fans. Peggy and Howard aren't close friends or romantic partners in the comics. Of course, that doesn't mean there's no chance of them getting together on Agent Carter.

Rich, dangerous, disarmingly attractive cad meets whip smart, independent modern woman. Sounds like the makings of a disastrous first date or bad romance novel. OK, I'm being harsh. In the right hands this pairing could totally work. But considering Marvel is gearing up for the Civil War storyline in the films where we'll see Tony Stark and Steve Rogers at odds, to develop the relationship of Steve's would-be love and Tony's dad would be... weird.

Most likely, Agent Carter will show these allies deepening their friendship as they handle post-war life.

But We Will See Peggy with a Love Life (Eventually)

We still don't know who Peggy's husband will turn out to be, just that she eventually got married. In the comics, Peggy actually doesn't get married, so the show has a lot of room to explore the character. In an interview with IGN, Hayley Atwell who stars as Peggy Carter, was vague about who her husband will be revealed to be and said, "I think what’s going to start happening in Season 1 is seeds are going to be planted as to what happens in her personal life - and yet it’s still open to the possibility of new men coming into her life, deepening relationships with the men that we discover in Season 1."

I, for one, will probably start shipping Peggy with her fellow agent and the only man who apparently isn't a sexist jerk on the show, Daniel Sousa, who is played by Enver Gjokaj. I have been a fan of his since the short-lived Dollhouse, where he proved to be a chameleon and powerhouse as an actor. I mean, come on, just look at these two!

We only have eight episodes of Agent Carter to look forward to, since there is no word about the show continuing onto a second season. Hopefully, the series will be another success for Marvel, because Peggy is one of their most fascinating characters to explore and I want to keep watching her kick ass, professionally and personally.