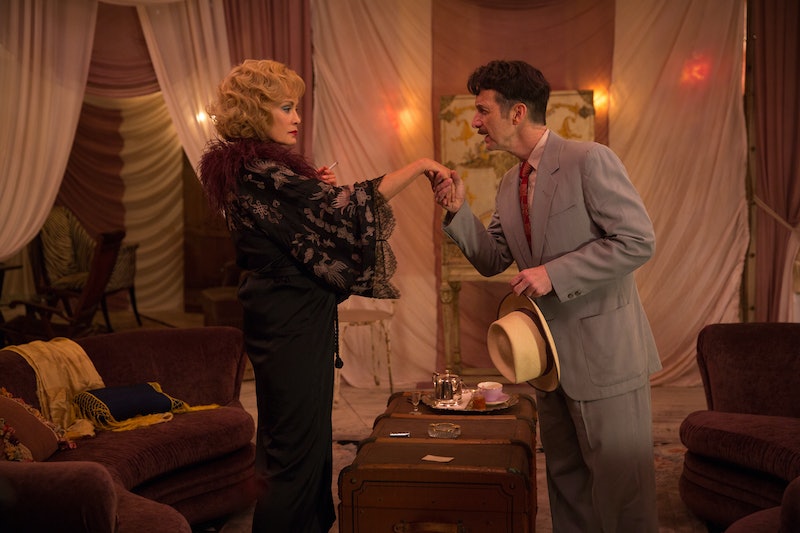 The characters on this season of American Horror Story are anything but reliable. I'm not necessarily talking about their lack of ability to discern who's out to get them. (How many performers have to wind up dead before we start suspecting Stanley?!) The American Horror Story: Freak Show gang is full of people whom we're not so sure we can trust as narrators — a problem, considering that we see everything through the lens of the different characters. We know that we don't get an objective truth when we watch any season of American Horror Story (lest we forget Fiona's final trickery on Coven) but Freak Show's many flashbacks, flash-forwards, and dream sequences make it tough to identify just what reality is for these characters. Is anything real on American Horror Story: Freak Show ? Though that might be one of the most frustrating things going on this season, it also might be what keeps viewers hanging on — we want to know where the lines of fantasy and reality merge.

Unfortunately, the show doesn't seem very invested in clearing up those mysteries right away — and it might not until the very end of this season. Here's what needs clearing up, and what we can assume about each vision:

Bette and Dot's Surgery: Not Real

Dot has had multiple visions and dreams of a separation surgery which ultimately kills Bette and leaves Dot free to explore the world on her own. Yet, in "Tupperware Party Massacre," it seems that Bette and Dot have reached an agreement — neither of them can live on their own, and neither want to. Though I predicted at the beginning of the season that Dot's dreams were foreshadowing into the future, Dot has now changed her tune. If there is a surgery to separate the twins, it most likely won't be at the behest of Dot or Bette — though there's always the chance that it could be performed by the maniacal Stanley.

In "Orphans," a flash-forward episode, we see Pepper begin her work at the library of Briarcliffe, aka the titular asylum from Season 2. While there, Pepper sees a Life Magazine with Elsa's face on the cover. She achieved her dreams! She's finally a star! But... is it real? Or is it something Pepper imagined to make her wrongful imprisonment just a little less terrible? Considering that Elsa's image on the cover was the end point to the midseason finale, it seems that this flash-forward does hold some significance. I think most viewers assumed that Elsa would never get to Hollywood — certainly not with con man Stanley's assistance — but this proves otherwise.

During Elsa's first performance of the season, a version of David Bowie's "Life on Mars," we see a woman in the audience dressed as a clown. The woman looks alarmingly like Elsa — even though Elsa is performing on stage. Viewers were left scratching their heads — does Elsa actually have a twin?! Considering that Elsa's "twin" was never brought up again — nor were there any other visions of her — her inclusion might be more about symbolism than reality. Perhaps Elsa saw her sad life projected on an audience member, hence the tragic clown with her face watching "Life on Mars." Either that, or Ryan Murphy is just screwing with us — it wouldn't be the first time.

The Murders of the Performers: Sort of Not Real

Stanley and Maggie planned to kill the performers and send their bodies to a museum of oddities in exchange for cash. We've seen elaborate murder fantasies play out in Stanley's mind, and while the murder of Bette and Dot didn't go as planned, he did get his mark with Ma Petite. The detailed fantasies seem to suggest that, perhaps, Stanley will find a way to kill all of the so-called "freaks" — it just might not play out exactly as expected. And everyone should watch out.

Did Jimmy's mother really come back as a ghost to haunt him, or is it just a vision brought on by grief? I'm inclined to say the latter, but as established in the two-part episode "Edward Mordrake," ghosts are a part of the American Horror Story: Freak Show universe. Really, Ethel could be a ghost or the embodiment of Jimmy's conscience — until she can start physically effecting the plot, it won't matter.