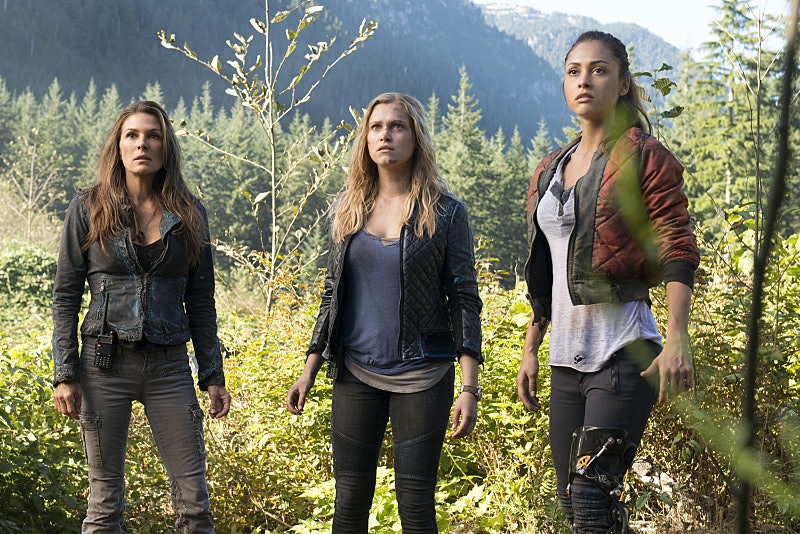 Ah, my dear, sophisticated, television aficionados — get ready for more post-apocalyptic teen drama because The CW’s The 100 Season 2 will return on Jan. 21 to your TVs and streaming devices. I know what you’re thinking: “I like Breaking Bad and Game of Thrones and obscure Adult Swim cartoons. Why would I watch a show on The CW?” Perhaps you might also be thinking, "Isn’t The CW just a swirling vat of hot, young stars having PG-13 sex with fOrBiDdeN LoVeRz?”

The answer is often a resounding “yes.” However, allow me to pitch to you why watching The 100 should be on your January to-do list. First off, the whole first season lives on Netflix, so your paltry excuses mean nothing to me. But there's more.

Here’s the deal: 100 sexy teenage criminals are on a space station — stay with me — until they’re sent down to earth as a test run for the (sexy) grown-ups, because the earth was ravaged by nuclear war and its accompanying radiation. OK, you might have your doubts, but continue to stay with me. They don’t have a conch to determine who gets to talk à la Lord of The Flies, so they use a finely honed “hottest, coolest person gets to talk always” system. Now, I’m no Sam Smith, but I’m begging you to STAY WITH ME.

Here's a dirt-covered, blood-spattered, estrogen-powered look at what makes The 100 so deliciously watchable (if I haven't convinced you yet).

It’s Shown Just as Much Growth as Its Characters

The pilot and first couple of episodes make the show out to be a bundle of clichés. I’ll admit that I started out, like you might, a reluctant hate-watcher. I mean, look at the first reaction to setting foot on untouched soil:

What is this, a Cheetah Girls reunion film? (Please someone make that happen.) Here’s the thing though — as many critics have pointed out, once The 100 hits its stride, it does an excellent job handling the moral dilemmas that arise in a post-apocalyptic adventure. Characters change, grow, and act accordingly. It’s not without flaws, but the focus of the plot moves away from love triangles and towards the psychological implications of survival mode. Color me impressed.

The Show Passes the Bechdel Test with Flying Colors

There’s a moment in the second season (hopefully this is out of context enough not to be too spoiler-y) when the female president argues with the female police chief and the president’s own daughter, also a leader, about how to deal with a prisoner and proceed against the enemy forces. The women are not cartoons of “tough chicks,” and the show does not ignore how women in power often have to fight for true authority. And when the male prisoner, formerly a powerful official, tries to turn the women further against each other, he is swiftly shut down. "OH HELL YES," I thought. Did I mention that the enemy’s first and second in command were women too? In that moment, The 100 set itself apart from scores of “strong female character holds her own with the boys” narratives that have come before in this medium.

It Has Emmy-Nominated Special & Visual Effects

Yes, you read that correctly. The 100 was nominated for Special Visual Effects in 2014 — along with The Originals’ nomination for best hairstyling — this is a first for The CW and it's well deserved, too. The 100 looks FANTASTIC for a show operating on a CW budget. For it to be in competition with Game of Thrones for visual effects is like having your workplace softball team play the Yankees (or Red Sox, jeez, calm down) in a pick-up game.

Fine, the Eye Candy is Nice Too

What do you want from me? It’s still a CW show. The bunker sex is to die for. Or rather, to SURVIVE for. Boom.

No Really, Lincoln Looks Like a Jacked Up Keegan-Michael Key

Could the taller half of Key & Peele be moonlighting as a swoon-worthy [spoiler redacted]?

Oh, the floppy hair power. I have to believe this line was an intentional Heath reference. I have to.

Well, there you have it. If you need one final push to watch The 100 when it returns, try this dashing smile on for size: