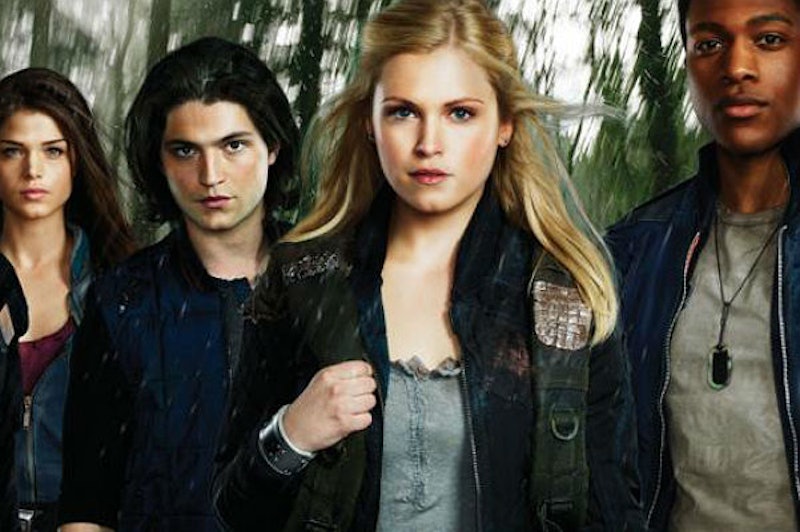 The Hunger Games, this series is not. Warner Bros. sneak-premiered one of the CW's many new supernatural series, The 100 , at New York Comic Con on Thursday and despite the initial comparisons of the fledgling series to a certain cinematic and literary juggernaut, it's just not cutting it. The exposition is constant and painful, the plot is indigestible, and the ensemble is a watered-down troupe consisting of practically every stereotypical teen drama character in the history of television.

But this is the CW, so all that is to be expected. It was the show's heroine who should have been the draw — the one who could make all of this worth it. While the CW may not be known for making masterpieces, they have been known to give the spotlight to strong, young female characters. Unfortunately, The 100's Clarke (Eliza Taylor) is a bad Xerox copy of Katniss Everdeen in which the edges are blurry and the corner of her eye and most of her ear are missing — a half-assed Copy-Katniss, if you will.

Where Katniss is young woman who sacrifices herself to save her young sister from being forced into the Hunger Games via country-wide lottery, Clarke is a juvenile delinquent who acted out after her father's death and is sent to fight it out in the wilderness with a slew of other young, hot inmates. Where Katniss was confronted with the strange task of playing the Capitol's game of glamour and faux-mance in order to win a cruel competition meant to control the masses, Clarke's main goal seems to be nothing other than to be in charge of her fellow felons. Where Katniss builds a friendship bond with Peeta during their harrowing journey with the possibility of more (no spoilers here!), Clarke is looking down the barrel of a catty romantic rival for the affection of a stereotypical bad boy who doesn't care about the rules. Can I yawn now? I really need to yawn.

Katniss is gracious, caring, cunning, and clever. Clarke is bossy, harping, and entitled. While she may start the series with the signature tousled Katniss braid, Clarke cannot hold a candle to the Girl on Fire.

The 100's creators doubtlessly wanted Clarke to stand apart from Katniss — but not too far apart. In the process, they've missed their mark completely. This series, which plops a group of young people into a wilderness environment in which they're sure to kill each other, is so obviously chasing the Hunger Games dream I'm surprised they aren't running ads that pitch viewers with claims of "hungry games!" and "Katniss Ever-green!"

But, no matter how hard the pilot tries — and oh boy, does it try... hard — viewers already have a much better version of this story. It comes in three volumes of literature, and in due time, four different films. This cheap play on the worldwide sensation of awe-inspiring science fiction is obvious, obnoxious, and completely ineffective. And while Clarke gives it the good ol' college try, no generic TV character can share the spot in our hearts that belongs to Ms. Everdeen.