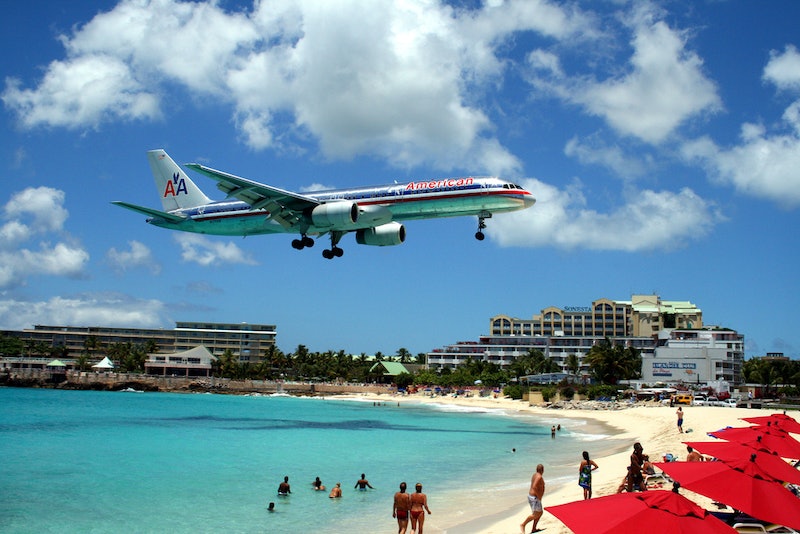 As someone who has to travel out of the country frequently, I have a nice collection of both domestic and international airline miles at all times. Sometimes, I use my frequent flier miles to upgrade to first class; while some I cash in at the last minute to run off and visit a friend, and others I keep tucked away for emergency situations. I currently have a collection of frequent flier miles on six different airlines, and two credit cards through which I continue to add to these miles.

But just because most airlines offer credit cards so you can build your frequent flier miles, that doesn’t mean that it’s definitely something you should do. Certain credit cards have fees and high APRs, the annual percentage rate that is charged for borrowing money. (That said, if you set a reminder to pay your bill on time every month, you'll only have to contend with the annual fee and will never have to pay interest.) Some cards also have blackout dates, where the airline gets to decide when you can even use those hard earned miles (yes, charging Seamless twice a day is “hard earned”).

Although there is no perfect credit card — (because in the end they’re just hoping you’ll screw yourself so they can get all those extra fees) — there are cards that better fit for those who travel often. Here are the five best credit cards to consider if you’re looking to build up your airline miles.

Apparently this is THE card for every traveler out there. Even the name sounds like drops of golden coins on a floor made of diamonds.

Pro: The miles earned with your Barclay Arrival Plus World Elite Mastercard card can be used on any airline or hotel, so that right there is a really awesome. The reward system is so flexible that it even allows you to book through discount sites like Kayak, as opposed to going straight to the airline where flights tend to be pretty steep.

It gets you 2.2% rewards for every $1 you spend, which definitely puts it in a league of its own. The sign up bonus of 40,000 points can easily be attained within the first 90 days of having your card by spending $3,000 on items. It offers 0% APR on transferred balances within the first year and you get 10% miles back every time you redeem your travel statement credits.

The Barclaycard also doesn’t have any fees for foreign transactions and is chip enabled, which, if you’ve ever tried to get metro tickets in Europe with your U.S. credit card and failed, know is a really great thing to have. Without that chip, a lot of metro stations (and other places, too) won’t accept your card.

Con: There are two possible variable APRs: 14.99% or 18.99% (pretty steep), which, according to their site, is dependent on “your creditworthiness.” After the first year of owning the card, there’s also an annual fee of $89.

OK, what kills me about this one is they have rejected me (twice), because I’m not “preferred,” in their eyes. So judgy! I like to think that I once I get my credit score over 700, they’ll reconsider me. But I digress.

Pro: The Chase Sapphire Preferred Card allows you to transfer points to several airlines, including United, Southwest, British Airways, Korean Air, and Singapore KrisFlyer. While I can’t attest to the traveling conditions on the latter to airlines, I can say that if you have to fly internationally and AirFrance is booked, British Airways is the next best thing.

You’re also looking at 40,000 bonus points if you spend $4,000 in the first three months, and after that, you get two points for every $1 spent on dining and traveling. So, you’re traveling, but earning while traveling, just so you can travel even more. (See why I want one so bad?) And you always get 20% off when you redeem your points for any travel-related expenditures.

This card also doesn’t have any fees for foreign transactions and is chip and signature enabled, too.

You have to figure that any card that has the word "venture" in its name is going to be about miles.

Pro: Similarly to the Barclaycard, a Capital One Venture Rewards Card will get you the 40,000 points for signing up once you spend $3,000 in the first three months. You also get two miles for every $1 spent, and whatever travel rewards you get, they never, ever expire, which is great for those of you who have bosses who give you the stink eye every time you mention maybe taking a vacation. There are also no blackout dates, in case your boss does relent and you can get the hell out of town.

Con: Yet another annual fee! Although this card, too, doesn't apply the fee the first year, and is only $59 every year following. But a major blow is that this card is for those with "excellent credit." It even says it right there on the site, in all blue capital letters: EXCELLENT CREDIT. This means falling between 740 and 850 with your credit score.

So, what's in your wallet? Probably not one of these cards, because the U.S. average credit score is 723.

As much as the word "BankAmericard" annoys me, since it also has "travel" and "rewards" in the name, too, I'm willing to forgive and forget. This one is also a little bit easier to handle if you're on a budget, too.

Pro: You get 10,000 bonus points (which is up to $100 toward your next travel purchase) when you sign up and spend $500 in the first 90 days. It may not be 40,000 points like the other cards, but you're also not locked into spending so much money in that amount of time. You also get 1.5 points for every $1 spent, so, again, we're just working with an entirely different ballpark, but one that's also far more attainable.

Here, too, there's no worry about black out dates, foreign transactions, and each card is chip enabled. On top of all that, there's also no annual fee.

Con: Before we can get totally stoked about this card there is a fairly big drawback with which to contend: the APR. The variable APR on this one can run as high as 22.99%. Yikes.

Personally, you couldn't pay me enough to fly Southwest Airlines, because that whole racing for a seat thing stresses me out. But when it came to lists of great credit cards for airline miles, this one popped up time and time again.

Pro: The thing about the Southwest Airlines Rapid Rewards Card is that where it fails in the percentage you earn for every dollar (only 1.43%), it makes up for in free flights. After spending $1,000 on items in the first three months, you get 25,000 points for one roundtrip flight, on Southwest and in the U.S. (Wanna Get Away fare to be specific), of course. You also get 6,000 points every time your cardmember anniversary rolls around which is pretty cute, too.

Con: There's an annual fee of $99 right off the bat; there's no fee-free year here. It's also not chip enabled, so you'll be forced to use Euros in places that don't accept chip-less cards.

More like this
After 24 Years Of Disney Vacations, I Finally Took A Trip On My Own
By Charlie Mock
A Guide To All Of Zach Shallcross' 'Bachelor' Filming Locations
By Brad Witter
These Are The Fastest Electric Kettles You Can Buy
By Margeaux Baulch Klein
The 3 Best Heated Steering Wheel Covers
By Margeaux Baulch Klein
Get Even More From Bustle — Sign Up For The Newsletter
From hair trends to relationship advice, our daily newsletter has everything you need to sound like a person who’s on TikTok, even if you aren’t.