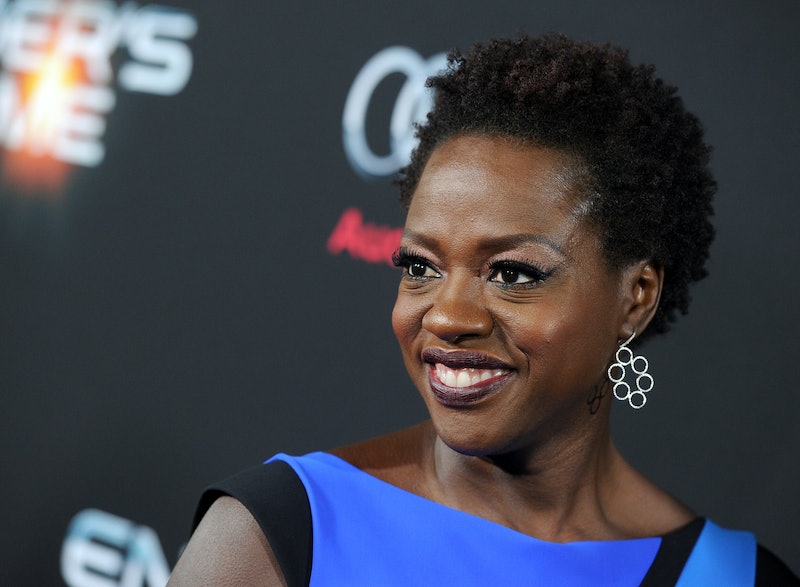 The Golden Globes are this Sunday, so start holding your breath for your favorites. I'm rooting for Annalise Keating — will Viola Davis win for How To Get Away with Murder ? She is also nominated for a Screen Actor's Guild Award, and won the People's Choice Award earlier this week. Davis as Professor Keating was the perfect addition to Thank God It's Thursday, the three hours of Shonda Rhimes melodrama that consume our need for "OMG moments" and epic monologues every week. Davis may play a lot of supporting roles on film, but she shines as the lead of this show. It's a new series, and hopefully How To Get Away With Murder will run for many dark and twisty years, but the level of acting we got from Davis in 2014 needs to be awarded ASAP.

Plus, while Kerry Washington was nominated last year for Scandal, it has been over 20 years since a woman of color won in this category. In fact, Davis and Washington are the only two Black women to have been nominated since Regina Taylor won in 1992! How is anybody supposed to hope for more and better representation on television when we aren't recognizing the work that is being done today? I mean honestly, Davis should win for this HTGAWM scene alone (and no, I'm not just talking about the last line).

Or the last scene of the midseason finale, but no more spoilers! The entire show rests on this classically beautiful actress. The subtlety she brings to the role keeps us on our toes at all times. She absolutely, in my opinion, was the best actress in a television drama this year. However, I'm not in the HFPA, so let's go through Davis' chances of bringing home the highly deserved prize.

As much as I hate to pit ladies against each other... it's a competition so I have no choice. The other nominees are Robin Wright for House of Cards, Claire Danes for Homeland, Julianna Margulies for The Good Wife, and Ruth Wilson for The Affair. Claire Danes has already won twice for her role as Carrie Mathison, in 2012 and 2013. I stopped watching Homeland after the second season, and from what I saw on Twitter after the last season finale, I made the right choice. Wright took home the statue last year, and would be my guess as to which actress could beat out Davis at this year's awards. Those Underwoods are a sneaky bunch. However, the second season of House of Cards did not receive the same acclaim as its debut either. Maybe it's time for the star of another freshman series to take the stage.

This could mark an important turning point in recent Golden Globes history. The awards for drama have been going to cable and Netflix shows, ignoring all the hard work that goes on in network dramas. Sure, HTGAWM can be a campy nighttime soap opera, but you'd be lying if you said it never gave you chills. This would be a win for the networks as well.

Davis caries so much gravitas, and has missed out on a Globe and an Academy Award twice, so I can see the Hollywood Foreign Press rushing to award her for her craft this time around. I'm sorry to be so cynical about it. I would watch HTGAWM over House of Cards any day and she has my vote. However, I think if Davis does win on Sunday night, that timing may be involved. Still, she needs a win more than anybody. There's no excuse for Viola Davis to not be a huge star. She is already a household name! A Golden Globe would be a fitting next step.