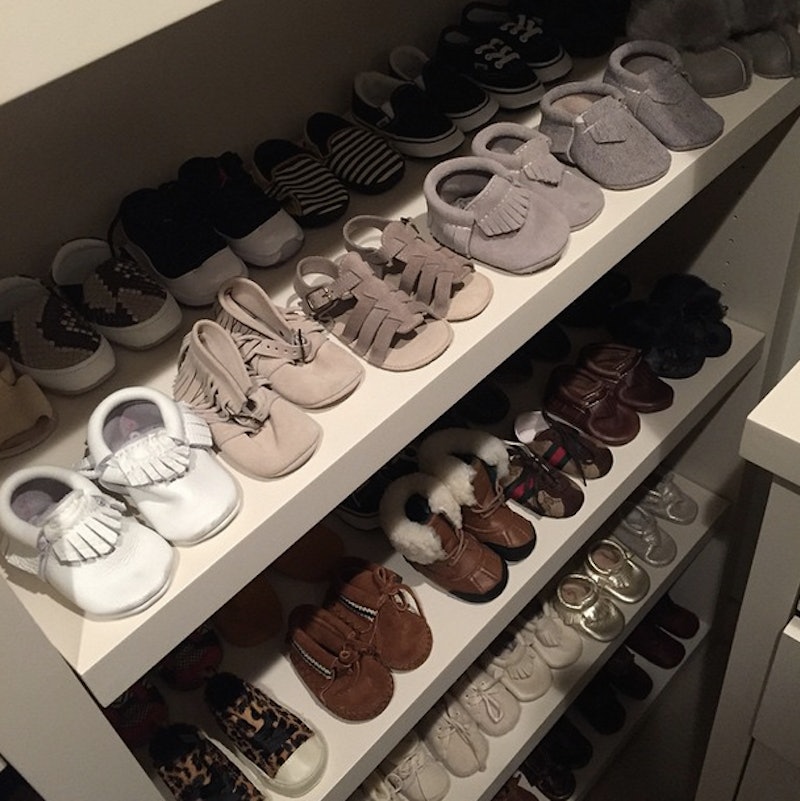 Kourtney Kardashian recently Instagrammed a photo of baby Penelope's shoe closet — a huge, ridiculously posh collection of shiny and expensive footwear. And I have a big problem with it. No, it’s not that I’m jealous of a baby’s wardrobe. (I mean, I am, but that’s beside the point.) And it’s not that money spent on multiple pairs of tiny moccasins for a girl who just learned to walk could have been better used elsewhere (I mean, it could have, but that’s not it, either.) Actually, my beef with these designer kicks goes back to something I read four years ago, when baby Penelope was still just a twinkle in her mother’s eye.

I don’t know what made me click on the article. Maybe it showed up in my Facebook newsfeed, or maybe my sister emailed it to me, thinking I’d enjoy it. It’s been so long since I read it, I don’t even recall the name of the sociologist who wrote it or the publication that printed it. But I still remember the message: Stop calling little girls "pretty."

It was such a jarring thing to see on the page. I mean, why wouldn’t we tell girls they’re beautiful? At some point or another, every young woman realizes she doesn’t look like her Barbie doll. And some punk, 12-year-old boy will inevitably poke fun at her too-flat (or too big) chest. Maybe, if she’s like I was, she’ll start standing on the toilet seat in order to get a better view of her thighs in the bathroom mirror, so she can properly criticize the circumference of each one. (I know, what a waste of time.) I always thought positively remarking on a girl’s appearance might help arm her with a boost of self esteem before these moments happen. And maybe if you tell her she’s pretty enough, she’ll stop balancing on toilet bowls altogether.

But the sociologist’s article was so convincing, I found myself nodding in agreement. Commenting on appearance is often the first thing we do when in the company of a young girl. Rather than “What grade are you in?” or “How do you like your teacher?” — which we might say to a little boy — we squeal over frilly dresses and pretty hair. We give the impression that looks are the most important thing. We think we’re helping, but we’re actually part of the reason girls end up standing on toilet seats to begin with. The sociologist’s conclusion: We’re making it worse.

From this moment on, I vowed to only chat with female children about non appearance-related things. And when a friend invited me over for lunch with her and her three-year-old daughter, I was ready to give my new resolution a go… or so I thought.

As soon as I walked in the door, I saw Chloe sitting on the living room floor playing with blocks. Unfortunately, she was dressed in an adorable Where the Wild Things Are dress. Reader, I love Maurice Sendak. I still, as an adult woman, keep his book on my shelf, and I would probably sport this ensemble were it made in my size. I couldn’t help myself: I gasped. Chloe looked up at me from the floor, and I quickly bit my tongue. I had not been in the presence of this child more than thirty seconds, and I’d already nearly squealed over an outfit.

My friend called from upstairs that she’d be down in a minute, so I sat next to Chloe and said hi. And then — silence. It suddenly became clear to me why we so often center conversations with the under four-foot set on clothing and cool hair accessories. What else do you say to a three-year-old? How’s work? How’s your love life? Any plans for the weekend? I panicked and told her I liked her blocks. She stared at me, blankly. So I grabbed the nearest book and pretended to search for Waldo

And that’s when it hit me. Books! Books are more important than appearance, and even kids who can’t read yet love them! Suddenly, I had my in. When my friend showed up, Chloe and I were chatting away about her favorite pop-up literature. No body image issues were born this day, thankyouverymuch.

But this small victory aside, it’s still a struggle, four years later, not to immediately compliment the pretty little style of the young girls I interact with (especially when their clothes are as cute as baby Penelope’s). But no matter how they look, I feel almost obligated to say something, and this, I’m realizing, is because the importance society places on appearance — even for children — is insidious..

Take the “Pirates and Princesses” lunches hosted by the large, well-known hotel in the town where I live. The pirates (boys) who attend are taken into a special area to learn sword fighting, while the princesses get to dress up in fancy tiaras and take an etiquette class. It’s 2015, and we’re still telling females that accessorizing (with good manners!) is more their business than kicking ass and taking names.

But the scary thing? These lunches — and so many like them in towns all over the place — were really popular. Most adults never gave them a second thought, because nurturing a young girl's desire to be a pretty, pretty princess is actually considered good parenting — no matter how flawed the princess model may be. Even my own mother — who thinks that Beauty and the Beast teaches little girls they can transform monstrous men into good guys if only they’re pretty enough — took me to see a production of it on ice.

Which brings me back to Kourtney and her baby shoes. I’m sure she meant well when she bought them all for Penelope, just like we all mean when we tell a little girl how beautiful she is or take her to see a pretty princess in the movies. But the bottom line is that females, even toddlers, are constantly bombarded with messages about their appearance and how much it matters — more so than personality, intelligence, or strength of character. We don’t need to confound the situation by instilling love for a strong shoe game in our infants, so that by the time they’re in kindergarten, they’re irrationally concerned over their kicks.

Bottom line: Girls — no matter how young — are more than the adorableness of their dresses and the style of their shoes. And unless we want them all to end up teetering on toilets in order to scrutinize their bodies, we’ll start acting like it. No matter how cute those moccasins are.

More like this
Most Comfortable Underwear For Big Butts
By Audrey Williams
Kourtney Kardashian Just Wore A Swimsuit With Evening Gloves
By Allie Fasanella
42 Black Owned Fashion & Beauty Brands To Support Today & Always
By Mekita Rivas, Shea Simmons, Kui Mwai and Dominique Norman
11 Graduation Guest Outfit Ideas To Wear To Someone Else’s Ceremony
By Phoebe Avison and Claire Fox
Get Even More From Bustle — Sign Up For The Newsletter