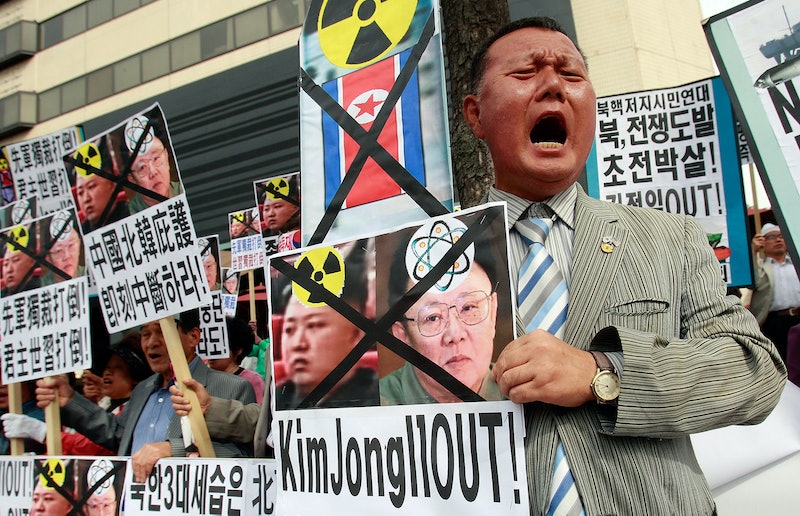 North Korean leader Kim Jong-Un (you might recall him as the Sexiest Man Alive) is a generous kinda guy. According to a report from New Focus International, this year for his birthday, he chose to give rather than receive—copies of Mein Kampf, Adolf Hitler's notorious autobiography, to be precise. High-ranking North Korean officials were reportedly presented with the book to mark Jong-Un's birthday, and were given a speech about how it might be a good idea to, um, model North Korea on some elements of Nazi Germany.

"Kim Jong-un issued an order for the Third Reich to be studied in depth," New Focus International, which gets its information from volunteer citizens and North Korean defectors, claims. It added that good old Kim "asked that practical applications be drawn from it."

We hesitate to add "on a positive note" here, but apparently Kim's focus is more on the swift rebuilding of Germany post-World War I, rather than, you know, the atrocities performed by the Third Reich. Jong-un also hopes to imitate Nazi Germany's emphasis on sports (because that's what we remember them for; baseball) and childhood-related policies. A "Three Child Policy" is apparently on its way—think of it as the polar opposite of China's "One Child Policy," where families would be rewarded by the government for producing more bodies to make up North Korea's army.

The director of North Korea's "secret police" reportedly praised the Gestapo in a speech. "Stop focusing on ways to make money in the markets," he instructed (because setting yourself up for economic ruin is probably the way to go) "and mould yourselves after the Gestapo."

Huh. Technically, Mein Kampf is banned in North Korea, but Jong-un, never being one to conform to law or basic ethics, is said to have lifted the ban in order to republish a hundred copies.

In an interview with Charlie Rose Monday night, Obama vowed to collaborate with China to be tougher on the wild-child region.

"We're seeing the Chinese take more seriously the problem of constant provocation and statements from the North Koreans," the president said. "We're seeing an interest and a willingness to engage with us in a strategic conversation." That strategic conversation, we imagine, will probably be along the lines of "Let's nip this creepy Nazi-imitation thing in the bud, eh?"

In other bizarre Nazi news today, an ex-police chief who "willfully assisted in the unlawful execution and torture of the Jews" in 1944 was charged with war crimes Tuesday. Laszlo Csatary fled and became a Canadian citizen, hiding out in the country for more than a half-century. Canada—which we imagine is slightly embarrassed and didn't mean to be rude— has revoked his citizenship.