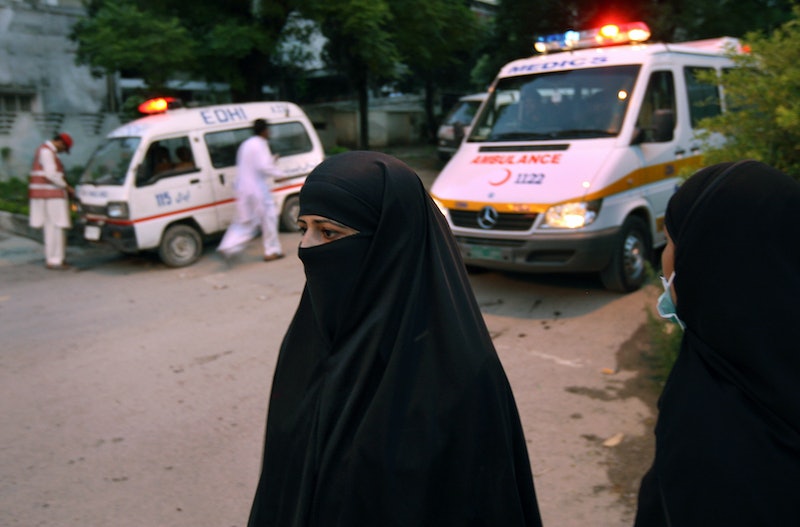 A woman carried out a suicide mission in a police station in Istanbul, Turkey’s largest city, on Tuesday, killing one police officer and injuring another. BBC reports that after the woman entered the station in Sultanahmet, a tourist region near the Blue Mosque and Hagia Sophia museum, she told officers she had lost her wallet before blowing herself up. Though her identity is not yet known, Istanbul governor Vasip Sahin told reporters on the scene that she spoke English.

"The widest investigation is to be undertaken to determine which organization could be connected to the attack," Prime Minister Ahmet Davutoglu said in a televised report.

It isn’t the first act of violence against the police in Turkey this week. On Thursday, a man threw grenades into a security checkpoint outside the Dolmabahçe Palace and near the location of the prime minister’s office before exchanging gunfire with officers. No one was hurt in that attack. The outlawed Revolutionary People’s Liberation Party-Front (DHKP-C), which is considered a terrorist organization by Turkey, the European Union and the United States, claimed responsibility for Thursday’s attack. While there’s no word on who is behind Tuesday’s, police officials in Turkey suspect DHKP-C, according to reports.

“Thank God there was a storm outside, because everyone was inside when the explosion went off,” Yusuf Akyun, a clerk in a souvenir shop nearby, told the New York Times. “Normally, there would have been more people by the police station.”

That the attacker was a woman reportedly dressed in a niqab, which typically represents modesty and adherence to religious faith in Islam, is a particularly notable detail from Tuesday's attack.

According to a report from the Strategic Studies Institute, the U.S. Army's institute for national security research, suicide bombings have become one of the main acts of terrorism because they're cheap, easy to plan and execute, and strike fear in the population. While female suicide bombers were rare — the first known female attack occurred in Israel in 1985 — they have become more frequent, accounting for at least 15 percent of all bombings, a report issued by intelligence analysts in the U.S. Army in 2011 found (that number has likely increased), and 65 percent of assassinations.

Because women are perceived as gentle and nonthreatening, they often have the element of surprise when they attack, especially in conservative countries where male guards will not search women. They also create more damning psychological repercussions, according to the Strategic Studies Institute.

In the words of a commander in charge of training future suicide bombers, "The body has become our most potent weapon. When we searched for new ways to resist the security complications facing us, we discovered that our women could be an advantage."

The BBC reports that Turkey is on high alert after the attacks.