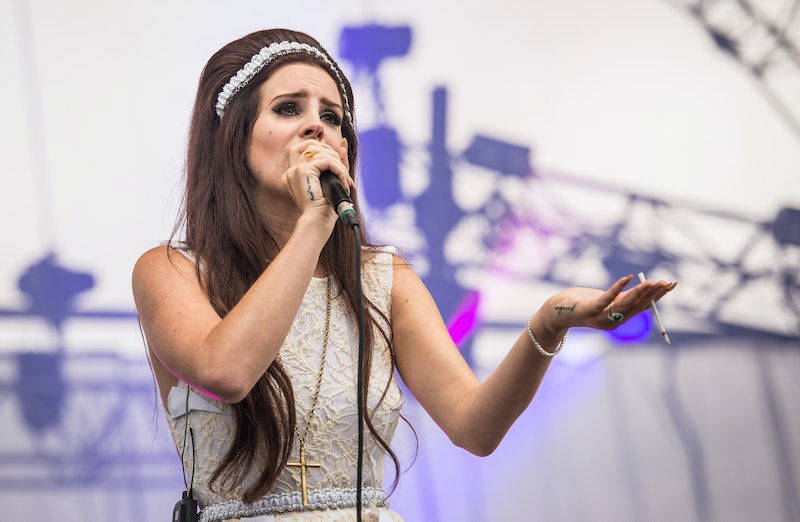 Ladies, get your tissues and flower crowns ready. Hot off the tail of Ultraviolence, Lana Del Rey announced yesterday that her new album Honeymoon is almost finished. With nine original songs and one cover planned out, Del Rey promises it'll be vintage Del Rey, a throwback to Born to Die and Paradise, filled with sexy, sad girl noir tunes. And honestly, from the information alone I can pretty much predict every song from the entire album.

No shade! As this website's self-proclaimed token sad girl, nobody loves — and understands — Del Rey more than I do. I've cried to "Video Games" at least six times... in the past hour. My Twitter is heavy with a kind of melancholy that would make Sylvia Plath go, "Yo, cheer up, dude." I have an auburn bouffant wig in my room, and I will put it on if, you know, you're into that kind of thing. Suffice to say, I think I'm an expert when it comes to Del Rey's brand.

So based on this expertise, here's what I'm guessing the track list will be for Honeymoon. To be perfectly clear, this will probably be revamped for the deluxe edition Second Honeymoon, which comes with a bonus CD and bottle of Lexapro to help you through the more depressing songs.

Having made casual mentions of Miami, Los Angeles, and every facet of New York from Harlem to the Hamptons, Del Rey was running out of glamorous places to name drop. So she took out a map, closed her eyes on and decided to write about whatever city her long, manicured talon landed on, which happened to be Camden, New Jersey. "Yeah, whatever," she said, liking how "Camden" rolled off the tongue. Something about that city just exudes glamour, you know?

She's especially playing on her cat-eyed vamp side here, talking about being a high end call girl for many exciting men (spoiler: they're all elderly and rich). The chorus is just the Walt Whitman poem, "A Noiseless Patient Spider." Shrug.

It's weird because like ... she's saying Jesus is her lover, but also that she's the Virgin Mary, and also that James Dean is Simon Peter? The metaphors are inconsistent, they're still working on this one.

In this song, surreptitiously inspired by Lolita, Del Rey talks about seducing an older man with her red dress on.

In this song Del Rey talks about a sapphire-eyed bad boy that takes her red dress off.

6. "Weeping in the Food Court"

In THIS song Del Rey talks about going to H&M and picking up another red dress for $17.99 plus tax.

An ode to Hollywood's timeless bleach blonde, red lipped icon (you know, Courtney Stodden) this gloomy siren song is about the dark downward spiral of stardom. It's also about drinking Moet Chandon champagne on the yacht of her lover. He's old. And as implied by the yacht, rich. Don't know if that came across.

It's a bit less I heavy-handed with metaphors than "Crown of Rose Thorns." Del Rey moodily lists all the thing she resents: the bright lights of fame, the fancy cars, composing for Tim Burton films, maybe dating James Franco and wearing all those spangly, caped, couture Altzurra gowns. West raps in the middle about how he's the greatest human being in the world and can't wait to get a Grammy for this. They will later get a Grammy for this, and Del Rey will inexplicably thank Allen Ginsberg.

They decided to end it with a lighthearted Nicki Minaj cover, obviously. The video, made on Del Rey's Mac Book Pro, contains grainy clips from Eraserhead intercut with footage of her twerking on John Wayne and crying. I can already hear the think pieces being typed out.

More like this
The Best Memes & Tweets About Lady Gaga Reportedly Joining 'The Joker' Sequel
By Grace Wehniainen
Beyoncé Delivers “Soaring Vocals” On New Album “Renaissance”
By El Hunt
Photos Of The 'Elvis' Cast vs. Their IRL Counterparts Will Have You All Shook Up
By Grace Wehniainen
Taylor Swift's “Carolina” Theme For 'Where The Crawdads Sing' Soundtrack Is Here
By Jake Viswanath
Get Even More From Bustle — Sign Up For The Newsletter