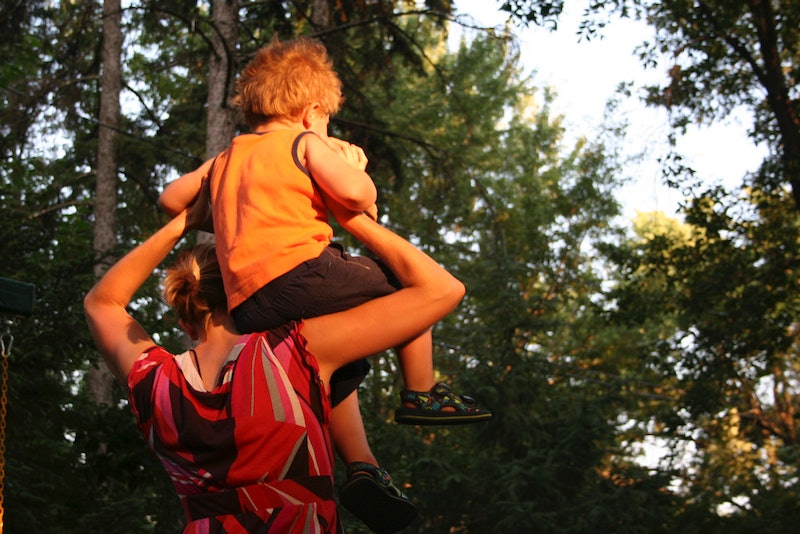 Kids are incredible little beings. Endlessly strange, honest, fun, surprising. They rule, OK? I don't have any children of my own and honestly, I don't know if I ever will. In the meantime, while life goes on (as it has the annoying tendency to do), I'm extra thankful for my role in four kids' lives as their aunt. Being an aunt offers the joy of spending time with children without any of the major obligations. It's one of the most win-win situations I can think of.

Recall your own aunt(s). Aunts, as a people, have a special wizardry. They're the women who gladly accepted your first wayward attempt at cutting hair. They're the women who let you name their cats Hanson, Clarissa, or something else awful. The women who taught you to match your toenail polish with your underwear at a questionably young age. (Hi, Aunt Amy). They had an endless supply of sour gummy candies and never yelled at you for leaning back in your chair. They took you on adventures and inspired you with their own.

My own nieces and nephews are a mix of traditional and adopted: One came from my actual sister, the other three from two BFFs. That's one of the many fantastic parts of aunthood: the bond is thicker than blood. If there's anything better in this word than tiny, adorable humans who are biologically or socially obligated to love you forever and ever, I have yet to find it. As an aunt, there's so much to enjoy.

You get to feel a lot cooler than you actually are

I mean, when it comes to looking cool as an aunt, it's not like you have a lot of competition. A little kid really only knows their parents, adults who yeah, can reach stuff on high shelves, but also are the ones doling less savory offerings like broccoli and discipline. You've got the height thing down but aren't typically in charge of forcing pureed peas on them. Even if you live in the same town, you retain some commodity status which lends a cool mystery. You have the option to be the first adult to award this small human their first bottle of vampy nail polish, their first taste of rap music, their first glimpse of (gasp!) a bedtime past 8p.m.

You're allowed to be super weird. In fact, it's usually expected.

Before my nephew comprehended actual words, my sister jokingly called me Aunt Batty. Since then, the loving nickname has (thankfully) been retired, but I have to admit that it's kind of on point. When an overall eccentricity is not only tolerated but actually welcomed, it's super fun to let the floodgates loose. Make a habit of wearing face glitter, warbling original songs about French fries, galloping for more than a few paces. We're all some version of Aunt Batty: embrace the strange in the name of entertaining the nieces and nephews.

Spoiling is the greatest

Obviously you don't want to violate rules your siblings or friends put in place for their children. But surely there's some wiggle room, yes? Bestowing even the smallest gift to a little kid and watching the aftermath of ensuing, unadulterated joy bloom is freaking awesome. An extra half-hour of TV, ice cream for breakfast, beatboxing lessons via YouTube — all the (totally normal) stuff you get to regularly indulge in in your mundane, childless life get an extra shot of magic when shared with a kid who wouldn't get to participate otherwise.

You don't have to sweat disciplining

Sure, when you're on babysitting duty, a little light discipline may enter the scene. In general, however, as soon as the kid starts getting a 'tude or violates a rule, you can pass 'em back to their parents. You can always link up again after they've deal with time-out.

You don't have to deal with gross stuff

Confession: This is totally something I need to work on. Even though I am an aunt of four, I have changed exactly one diaper in my life. I was 13 and babysitting for a neighbor. I've never been faced with that as an aunt because... that isn't part of my inarguable aunt duties. When a niece or nephew soaks their diaper or has snot crystallize across their tiny, precious mugs, I can pass 'em back to their parents. You always have the option to be A Good Aunt and tackle that icky stuff, I just haven't reached that level of goodness as a human quite yet.

It offers a great excuse indulge in silly fun

When else do you get the opportunity to play hide-and-go-seek in public? What about icing-eating contests? Set up a pool inside any place other than a frat house? You get the chance to revisit your own freewheeling childhood without anyone thinking you're weird.

It offers a much-needed dose of honesty

Children are notoriously, ruthlessly unfiltered. My oldest nephew is almost 6 years old now. I've known him since he was an impossibly small, pink raisin person. Now we have legit, insightful conversations. He's grown old enough to call me on my own BS, like that time I asked about the Yoda figurine he was carrying. He shot me a side-eye and sighed. "Aunt Beca," he said, "you really don't know who this is?" Fair enough.

You can always go home

Children are exhausting. It's an accepted truth of life. And parenthood doesn't end when the clock strikes a certain hour. Parents can be beckoned back into the hustle at even the hint of a scream. You, however, as an aunt, can totally retire to your own apartment where you get to pour a tall glass of wine and tune out for the rest of the night.

You've got a buddy for life

Watching another human grow in size, comprehension, vocabulary, interests, and profoundly off-color sense of humor is so exciting. You get to experience it in real time and later taunt them for things like that goth phase they'll go through as teenagers. Changes only continue to happen. And with all that change, your relationship warps, hopefully into a lasting friendship. One that, once everyone is an adult, may or may not involve the clandestine sneaking of mini vodka bottles into a family member's otherwise dry wedding. (Hi again, Aunt Amy.) Hopefully that same honesty remains, because the fun certainly does.

More like this
These Are The 3 Most Mellow Zodiac Signs
By Kristine Fellizar
20 Christmas Movie Quotes That'll Get You In The Holiday Spirit
By Alexis Morillo
Heinz Just Relaunched A Bean-Tastic '90s Fave
By Sam Ramsden
Emily Ratajkowski & Pete Davidson's Astrological Compatibility, Revealed
By Nina Kahn
Get Even More From Bustle — Sign Up For The Newsletter