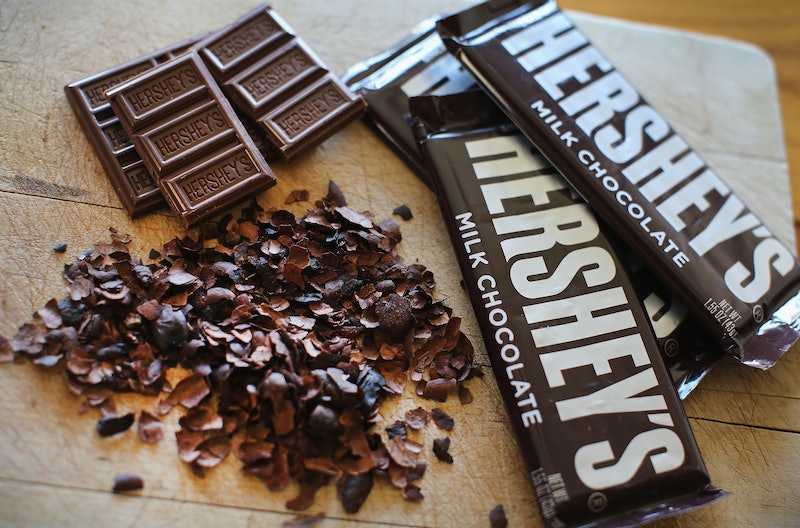 Attention — this is the most important piece of news you will hear all day: Hershey made a 3D chocolate printer. Repeat: Hershey made a 3D chocolate printer. A 3D printer that prints chocolate now exists. According to Foodbeast, The Hershey Company teamed up with 3D Systems to bring this dream to life. They unveiled it at the Consumer Electronics Show in Las Vegas on January 6, and you guys? I need one. I need one like it’s my job.

This remarkable device is called the CocoJet (which could also be the name of a 3D printer that exclusively prints likenesses of Conan O’Brien… but I digress). It can’t just compile chocolate out of raw material like the replicators aboard the Starship Enterprise can — file that one under “Star Trek technology I really hope exists one day” — but it can build up unique designs and creations out of liquid chocolate, layer by layer, with a brief cooling time in between each. How awesome is that? Just think of all the incredible, personalized gifts you could make for all the chocolate lovers in your life! Or yourself! Chocolate for all!

There’s no word on when the printer might become commercially available, or how much it might cost—although it’s probably safe to say that you’ll have to shell out a pretty considerable amount to nab one. 3D Systems also makes two 3D candy printers, the ChefJet and the ChefJet Pro; they weigh in at $5,000 and $10,000, respectively. They’re an investment, that’s for sure.

Watch the CocoJet work its delicious, chocolate-y magic below:

Strangely enough, I had never actually witnessed a 3D printer in action until I took a trip to the Maker Faire this past fall. What I find most fascinating about the technology (besides the weirdly hypnotizing effect watching them work has on me) is the sheer variety of things that can be used as their “ink.” Does anyone else kind of hope these other foodstuffs become 3D printer fodder one day? I mean, yeah, there are probably limitations to what you shove inside a printer… but I can still dream, right?

I suspect that a cronut printer could single-handedly topple Dominique Ansel’s bakery dynasty — unless he backed the device himself, in which case it would probably make him metaphorically bullet-proof and capable of taking over the entire world.

Yes, I know — pizza ends up on pretty much every single one of these weird lists I’m constantly creating. What can I say? It’s one of my favorite foods. A pizza printer would be a magical device, indeed.

Thanksgiving has never been easier!

Who doesn’t want a muffin button in their kitchen?

There are many things I enjoy making from scratch, but pasta is not one of them. Perhaps a 3D printer capable of making it would solve my problem.

Out of all of these possibilities, a pancake printer is probably the only one that would actually work in practice — and besides, a pancake bot already exists. Does the idea of 3D pancakes fire anyone else up? Because my brain is going off in all sorts of wonderful places imagining them right now. Breakfast will never be the same again.