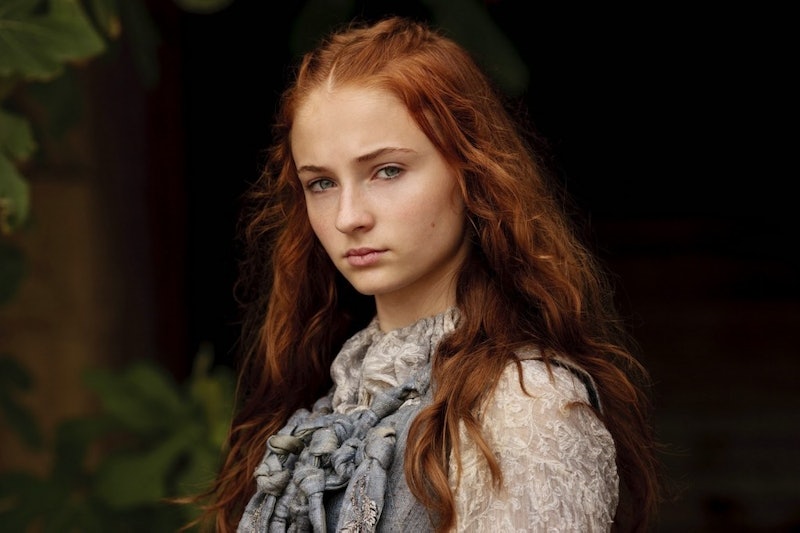 The year was 2006. I was doing one of those menial household chores that to a 15-year-old are basically the worst way to spend an afternoon — most likely it was dusting (yuck!). My mother's bedroom was always the most difficult, housed with heaps of old college textbooks, far too many picture frames possessing stills of my face, and all those small, seemingly-random figurines that moms everywhere are taken to accumulating. At the time, she had this affinity for purchasing literature sold in bulk packages at the local Costco. That's probably how Harry Potter first came into my life, and I'm pretty sure The Hunger Games as well. On this fateful day, I noticed a new collection: four books — all looking Bible-length, with font far smaller than the large text that makes the aforementioned Harry Potter books so deceivable. A Song of Ice and Fire it was called. The elemental nature of the title hooked me right away. Not to mention the fact that I could tell the setting was medieval — and with a medieval setting must come bizarre and fascinating medieval fashion.

I opened up the first volume to its Prologue: "We should start back," Gared urged as the woods began to grow dark around them. "The Wildlings are dead." Who were these Wildlings? Why were they dead? My ever-morbid curiosity certainly peaked, but the book was just so daunting. I had already committed to the Barnes and Noble Jane Austen Collection, after all. And that had seven novels in one. I couldn't possibly delve into this, even though I appreciated that this George R. R. Martin had a Tolkein-esque nature to both his name and literary format (from what I gauged from a solitary Prologue, anyway). In the years since, though. I've made time. Like so many others, it was the series that finally made me take the plunge to read the books (and I know: It should be the other way around). But, come on. It's HBO. The mystical scenery; the steamy nighttime television sex; the writing; the acting; the dragons; the White Walkers (a.k.a. the best zombies on primetime). What more can one even ask for in a show/book?! And did I mention the clothes?

Ever since that first GOT episode aired in 2011, I've been hooked to everything about the series and cursed the 15-year-old me for not having made GOT part of my life years ago. The way every single character makes you question your moral compass on an almost second-by-second basis blows my mind every day. I spend a lot of time thinking about these characters, in fact. Which ones would I love IRL? Which ones would I loathe? Who would be my frenemy? Who would be my one true love (Jon Snow 4E)? I put them in different decades — not unlike Tokyo-based French artist Mike Wrobel who transported Game of Thrones characters to the '80s. Most recently, I've taken to putting them in 2015. What would they do? Who would they be? And perhaps, most fascinatingly, what would they wear?! Here are the styles I personally think some of my fav characters would be rocking as we speak. And by "favs," I don't necessarily mean I love all these peeps as human beings, FYI. Many of them are horrendous specimens — but that's what makes them so interesting, no?

A high-maintenance lady on a budget, Sansa wishes she could embody Daisy Buchanan, but what's a second-year fashion student on a part time retail-salary to do? Well, that 40 percent employee discount at H&M is pretty nifty. With the right sense of styling — and the glammiest accessories one can find — that peplum dress might actually pass for something a little more sophisticated, right? She's all about looking like a million bucks when you only have $20 in your pocket. Can often be seen in thrifted Miu Miu heels and lace-collared shift dresses from ASOS.

Jon is the emo kid who never grew up. Remember your classmates in high school (remember yourself in high school) who went through the head-to-toe in black phase? Maybe they/you are personally still in that phase — and so is Jon. He wears the same Urban Outfitters ankle boots he's owned since freshman year of college (they're black leather, obviously). In combination with his black skinny jeans, black button down, black [velvet] blazer and black coat, he's perfected the tall, dark and handsome thing. But what other color is there, really, for an introverted and soulful dude who listens to far too much Nick Drake and has read The Unbearable Lightness of Being approximately six times?

Once a tomboy, Arya has hit her later teens now. And she's in in the slow process of a major style evolution. Having ditched all her cargo pants, baggy sweats and DC sneaks, she's transitioning to something a little bit different: The world of TopShop. There she can find ideal, almost-androgynous pieces — because, really, who needs gender roles in fashion? Arya is all about check prints, wool tights, high-waisted shorts, and oversized coats. She keeps her hair in a pixie cut, and loves taking style tips from Emma Watson (on the days she, too, goes for a menswear meets womenswear look).

Bran likes to keep things pretty casual. He's not into showy fashion — far too conspicuous. Because he's a private person, after all. He doesn't really have any go-to shopping destinations, and the concept of a "fashion icon" makes very little sense. Practicality over all else has always been his mantra. And yet, Bran always manages to look super put-together. His hair is shoulder-length these days — which once in a while he worries gives him the look of a nameless boy band musician — and he most often wears basic tees and dark denim. On colder days, he's not adverse to military-style jackets (though he wouldn't know how to ever define a military style jacket if you should ever ask).

Oh, Ygritte: Our favorite free spirited Wildling. Her style lives somewhere between hippie chic circa 1969 and boho babe circa now. She frequents East Meets West and prefers to shop organic, vegan retail so as not to take part in all the moral qualms she has with most of humanity. The majority of her wardrobe comes from legit thrift shops (not the overpriced, non-thrifty thrift shops), and her fav ensemble accompaniment comes in the form of hand-me-down Dr. Martens from her Williamsburg, Brooklyn-residing BFF. She's all about violating the status quo — but is she becoming a Hipster? It crosses her mind, but she thinks she'll be OK. And besides, Allen Ginsberg was considered a Hipster and wasn't he just inspiring?

Tyrion's main rule when it comes to fashion is "dress for your age," something both his parents ingrained within his psyche at quite a young age. He's partial to sweaters and tailored trousers. And, on occasion, a subdued paisley waistcoat atop a subdued monochromatic dress shirt. Though he fears his sense of dress echoes that of his parents far too much for comfort, he's unable to separate whether he loves his sense of fashion, or whether he's somehow been forced into it. His life is one existential quandary after the next, really.

Dani's style evolution is harder to keep track of than the weather. As a teenager, she loved the look and feel of all things vintage — '20s vintage, of course, not that whole drive-in-vintage thing from the '50s. But as she's gotten older, she's traded in the sparkly stuff for a more naturally-hued collection of ensembles. She loves her Earth tones and platform gladiator sandals. She loves wearing makeup in a way that's not at all obvious but gives her the perfect, natural shade of rosy cheeks and neutral lips. And most of all, she loves Anthropologie.

Passerby's often wonder whether Ram intentionally dresses like a creepy stoner/borderline-psychopath to keep humans away from him. His eyes are always bloodshoot — maybe he doesn't sleep; maybe he smokes too much pot — and his head is most often hidden in a black hoodie. He enjoys dark hues, denim chains and distressed, steel-toed boots (never know when those are gonna kick in). His headphones are always in his ears — as if to further block out all other people. But when he wants to be charismatic... boy, can he undergo a change in two-seconds flat. The hoodie comes off, the headphones are pulled out, his hair is slicked back. Dude is scary.

Cersei lives, breathes and shops all things Upper East Side. Those who know her joke that she is the lost Van Der Woodsen. She was christened in Chanel, married in Vera, and gave birth whilst wearing her Louis Vuitton's. Anything under $1000 is stuff for the peasants, or worse, for the Down-Towners. Only hand-crafted, expertly embroidered attire will do — the finest silks always welcome. Couture is the only way.

You guys remember Steff from Pretty in Pink, right? Otherwise known as Andie Walsh's arch nemesis? Yeah, he and Joff are basically the same person. Hailing from Beverly Hills, Joff picked up all those hideous traits associated with the California elite — and his sense of dress is no different. The boy loves his pastel button-downs, ironed-to-perfection khaki's, $2000 leather loafers and silk handkerchiefs (the only pocket accessory a real man needs, as far as he's concerned). Now, where did he put the keys to his BMW Roadster? Must be in yesterday's Dolce trousers — did he remember to throw those out? They were so boring.

With Marnie Marie Michaels as her fashion icon, Margery loves to go ultra-femme-working-girl, all the time. Pencil skirts, button down crop tops, "professional" stilettos (there is such a thing — and she rocks them), ruffled, nearly see-through tops. Her beauty routine consists of a sultry, dark red lip (she's mysterious, and she knows it) and eyes decked out in only Benefit "They're Real" Mascara — who needs a smokey eye to look dramatic?

Jaime likes all things tailored. He's a fan of natural hues with a twist — subtle and wonderfully masculine embroidery is key. Like his sister/lover, he frequents Saks and Bergdorf's, where he is on a first-name basis with 70 percent of the salespeople and stylists (the other 30 percent work for Ralph Lauren, Gucci and all those other less-than-couture, mediocre failures). Nothing makes him quite as pleased as recently-polished, fresh off the market Manolo's, though.

For much of her life, Brienne felt obligated to "dress like a dude" because of her larger frame, height and bone structure — areas of her body that her family never felt reluctant to deem "unacceptable for a lady." But after cutting them out of her life, and surrounding herself, instead, with accepting, open-minded, alternative-in-some-way folks, she slowly began to see her own beauty. She's still a minimalist — often opting for classic boot cuts, body-hugging blouses and oversized blazers — but she feels strong, empowered and confident these days. So there's no telling how her style will evolve with time.