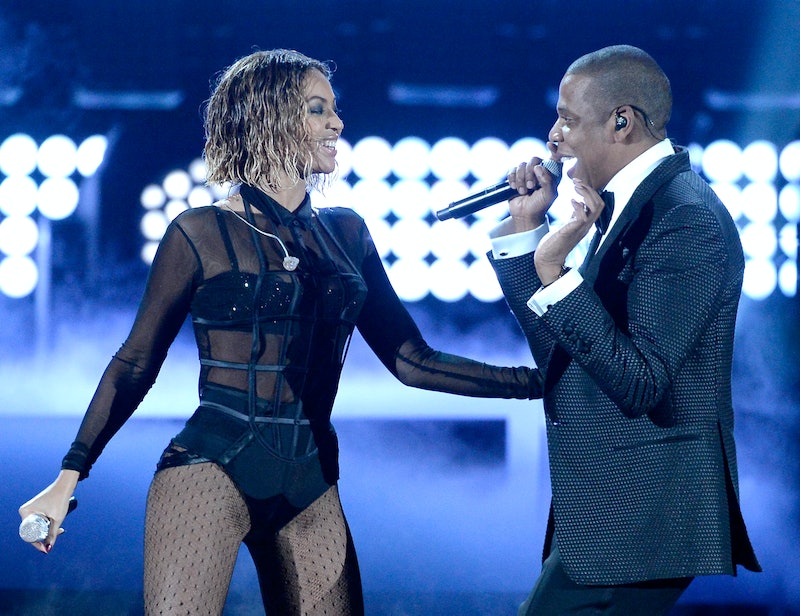 Over the past few weeks, Beyoncé and Jay Z fans have been treated to photos of the couple celebrating Jay Z's 45th birthday in Iceland, and more recently, the Carters were snapped with their baby girl Blue Ivy petting a baby tiger in Thailand. If this ignites a serious case of vacation envy, then a) you're not alone and b) envy not, because the couple's New Year's Eve deed will definitely put them back in your good graces. Recently, Bey and Jay took time out of their fabulous yet strict jet-setting schedule to arrange a New Year's Eve screening of their "On the Run" HBO special for the U.S. troops. In addition to the special, the nearly 2,000 soldiers stationed in Afghanistan and Kuwait also received an extremely thoughtful pre-recorded message from Beyoncé.

Before the special began, the "7/11" singer appeared onscreen and said, "I just want to say a big thank you for everything you do to keep our country safe." She continued, "We all sleep better at night knowing that you guys are protecting us, and we are filled with gratitude. So we wanted to do something special for you guys."

OK, so am I the only having a hard time imagining a bunch of troops having a total meltdown over this? I mean, they are tough as nails, but this is an impromptu gift from Bey and Jay we're talking about, not to mention a direct word of thanks from Queen Bey. Anyway, no word on if the troops sprang from their seats and expertly mimicked Beyoncé's "Flawless" hand choreography like Blue Ivy during the "On the Run" show, but needless to say, they were pretty freakin' excited.

In a press release from the USO, the servicemen and women who rang in the New Year to Beyoncé and Jay Z's concert were more than appreciative. SSGT Ferguson said the concert "made me forget I was in Afghanistan for the holidays," while SPC Johnson praised the singer for her "awareness and appreciation" for the troops.Watch Beyoncé's message to the troops below: