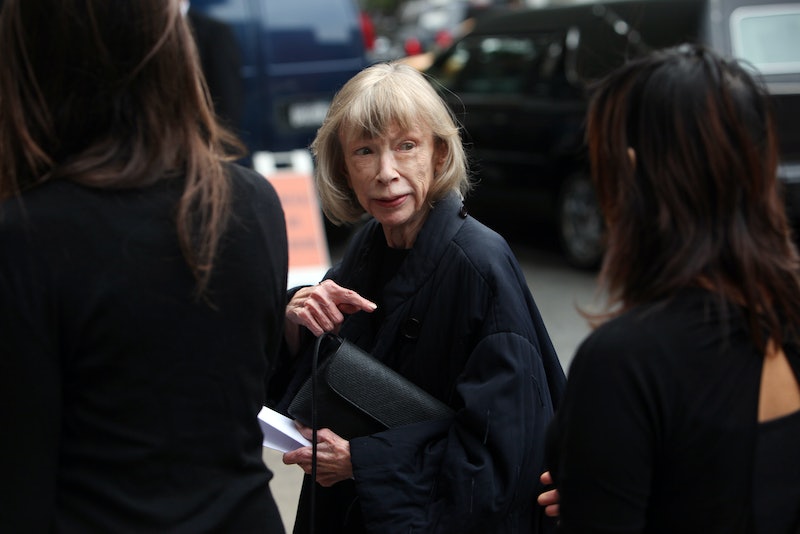 Joan Didion can't quit being so awesome. Céline just revealed the celebrated 80-year-old American author as the latest face for the brand. Prior to the big fashion reveal, Didion slid five novels under her sleek belt—in addition to 12 essay compilations and countless bylines in celebrated publications. Now, a Didion documentary is in the works and we couldn't be more excited. Why the giddy freak-out? Because Joan Didion is our champion, and in a life defined by so many moments, we couldn't be happier that she is certainly having another one this year.

Her bravery shined as she openly parsed through her grief in losing both a husband and a child. She boldly studied hoards of teens in the Bay Area during the Summer of Love, long after she was a teen herself. She's never afraid to be wrong, or get hurt, or lost. She nailed identifying the raw fibers that compose self-respect. Then she mastered an explanation of how to weave those together to resemble something like a rope to hoist yourself up from whatever trouble you faced.

There's no whining tolerated in Didion's universe. Only trial, error, love, and human nature twisting alongside her dusty California roots. She passes this wisdom through the simplicity of her simple, silver bob. Then there's her iconic, enormous sunglasses, and her perpetual air of "Oh yeah?" But above all else, Didion inspires us with the way she uses words. After all, words are kinda her thing. Here are some of her most influential, uplifting, and brilliant quotes. But head's up, Didion is not one to sugarcoat:

On being young and (kinda) dumb:

One of the mixed blessings of being 20 and 21 and even 23 is the conviction that nothing like this, all evidence to the contrary notwithstanding, has ever happened to anyone before. — "Goodbye to All That," 1967

One of the cool parts about aging is that a lot less registers as emotionally devastating. You now know you can survive, which is a priceless reassurance. However, that somewhat narcissistic feeling we all secretly feel in our early 20s can lend to testing creative solutions. That's the kind of skin-toughening that builds character and courage—something Didion knows, and articulates, so well.

On dealing with skeletons from your past:

I think we are well advised to keep on nodding terms with the people we used to be, whether we find them attractive company or not. — Slouching Towards Bethlehem, 1968

There's no use in trying to forget mistakes you've made, or phases of your past that you now maybe regret. It's all life, man. It all helped you become the person you are now, and will likely continue to fuel your growth into the person you're yet to become. Clutching a small memory of those incidents help keep you grounded—and prevent you from accidentally falling back into bad habits or scenes.

A place belongs forever to whoever claims it hardest, remembers it most obsessively, wrenches it from itself, shapes it, renders it, love it so radically that he remakes it in his image. — The White Album, 1967

Fear plays a major factor in preventing people from chasing (and getting) what they want. Didion suggests the hunt is worth pursuing, but only to those really dedicated to keep on going, even with bleeding heels. Once that thing is finally wrangled, it's bound to change. It has to.

I did not always think he was right nor did he always think I was right, but we were each the person the other trusted.— The Year of Magical Thinking, 2005

Didion and husband John Gregory Dunne met while she was an editor at Vogue in New York. She married the novelist in 1964 and the lit power couple stayed together until his death in 2003. You can't harmoniously stay with someone that long without a little zen trust, as Didion points out.

There is no real way to deal with everything we lose. — Where I Was From, 2003

Loss is a major theme across Didion's writings, most noteably in The Year of Magical Thinking and Blue Nights. She dissects the death of her husband in the former, the death of her daughter Quintana Roo in the latter. Life's cruelties may always seem random, unwarranted, and continue to catch you off-guard. However, Didion's most powerful quote helps begin to make sense of those cruelties. It offers hope.

On figuring out her own brain:

Had my credentials been in order I would never have become a writer. Had I been blessed with even limited access to my own mind there would have been no reason to write. I write entirely to find out what I’m thinking, what I’m looking at, what I see and what it means. What I want and what I fear.— "Why I Write," 1976

That's one powerful practice—writing. Thank the heavens Didion picked up that pencil to inspire us all to learn what we want and what we fear.

Check out this 1970s interview she did with Tom Brockaw: