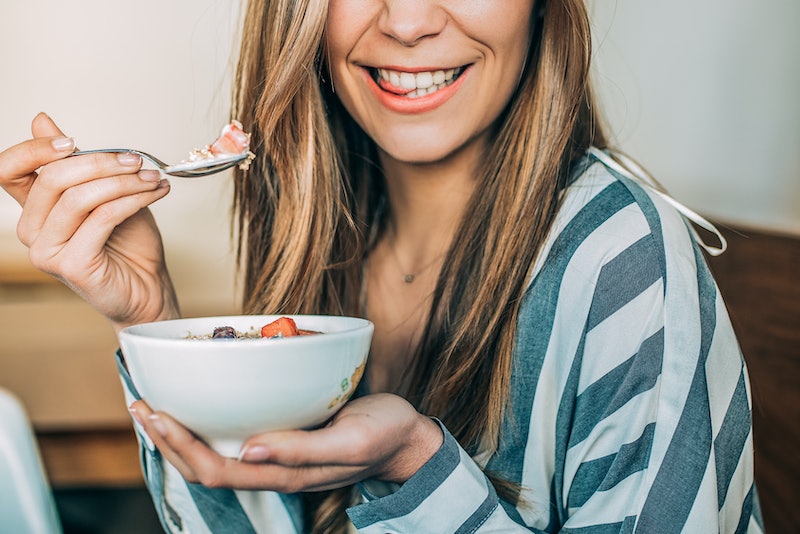 The English language is beyond tricky. Its complicated nature may be rivaled only by the deep-seated nuances of body language. We spend countless hours trying to analyze the words of someone we're dating; we agonize over how to articulate our feelings; we over-think every cover letter and thank you note. And on a sillier level, we are all guilty of asking ourselves stuff like, "Wait, SPOON is a word? Isn't that so weird when you think about, like, the word itself?" among other highly intellectual (*snort*) thoughts on the many other great mysteries of this hilarious language. One thing, though, I've never pondered but now cannot stop: Is cereal actually soup?

This video raises this important question, among many others. By definition, cereal is a form of food that absorbs a type of broth—milk, in most scenarios. However! Cereal and its traditional milk sidekick could also fall under the salad umbrella, if you think of cereal as a greens alternative and milk as the dressing. My brain is sweating already.

"Honestly, there is no real answer," the fast-talking host says (as I feel myself sigh a tiny sigh of relief). "The answer is what we agree it is. We make up the words and we make up the categories."

Next, he again unscrews all the bolts previously holding my mind together, introducing complex concepts like verbal nouns. Did you ever realize how the pretense tense of to "draw" is "drawing"? And when you're done what you created is also called a "drawing"? Just... lean back for a second and allow your noggin to soak up those rapid-fire truth bombs.

I like this video. But I don't know if I like like it. That's reduplication! I'm still kinda confused, but feel a bit smarter post-viewing. It goes on to reinforce a huge question mark Gabrielle Union raised when I was 9 years old that has continued to plague me ever since. I feel so whelmed right now.