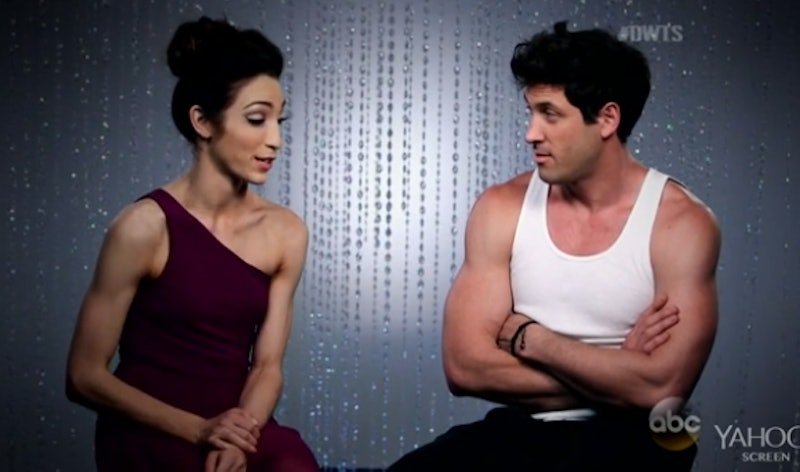 Everything about the Dancing with The Stars finale was glorious. And all of us who are vying to become dance champions learned a valuable lesson: sexual tension conquers ALL. Maks Chmerkovskiy and Meryl Davis, who are definitely in love were triumphant on Tuesday night's Season 18 finale. They won the Mirror Ball trophy! But the real champion? Their obvious, unyielding passion for one another. C'mon — you saw that blazing fire of steamy sensuality during their freestyle, right? That was basically soft-core dance porn, but I won't get into that. Let's get back to that whole "they'll definitely have babies" part. If you recall, during some behind-the-scenes footage, Maks said he wanted to "ravage" Meryl. He said he wanted to have babies with her! He even named them:

I want to ravage her and have ice-skating, big, Russian, mean babies. We’re going to call them Boris and Oleg. Their nicknames are going to be Bear. Both. One nickname for both.

Okay, he might have been joking, but ALL HUMOR IS ROOTED IN SOME SORT OF TRUTH, right?! It has to be.

And since pretty much the entire universe can smell the wedding (yes, apparently weddings have a smell, just go with it), Yahoo ! has compiled footage of Maks, Meryl, and her biceps, which zeroes in on their very palpable chemistry. We'll point you to the video, but first, let's do what we know we all did when we had crushes on people: ANALYZE THE BODY LANGUAGE.

His crossed arms might show that he's a little closed off, but he's also protecting himself. She's not making direct eye contact with him — she must be avoiding a certain truth. Hmm... wonder what that is? (She's hiding she's in love, obviously.)

Downward Glance to the Side

She's laughing and looking away from the camera, which is what one does when one doesn't want to open up about something. But look at that smile at the mere mention of Maks's name! Aww! She's glowing with pheromones!

He's talking with his hands when he's talking about Meryl and future ice dancing babies. Good lord, those kids will be born with abs. Clearly, he's into this whole idea, to the point that he's engaging his whole body, right?

There's that pensive, shy, looking-away-from-the-camera gaze when he's talking about Meryl. He looooves her.

Okay, that's the two of them in rehearsal, but that is SO MANY THINGS. Hands on the ass? Check. Tightly gripping each other in a loving embrace? Check. Eyes shut dreaming of their future together? CHECK.

Head in Lap Back rub

But it doesn't take a rocket scientist to read that chemistry! Still, check out this video of the two of them, and try to not get too lost in the dream of how glorious their ice dancing babies would be.

More like this
Teresa Giudice Flipped A Table — Again —  On The 'DWTS' Season 31 Premiere
By Jake Viswanath
The Ultimate Guide To 'DWTS' Season 31’s Move To Streaming On Disney+
By Brad Witter
Clayton & Susie Broke Up, Citing "A Significant Amount Of Pain" After 'The Bachelor'
By Jordyn Tilchen
‘The Ultimatum: Queer Love’ Is Officially On The Way
By Radhika Menon and Kadin Burnett
Get Even More From Bustle — Sign Up For The Newsletter