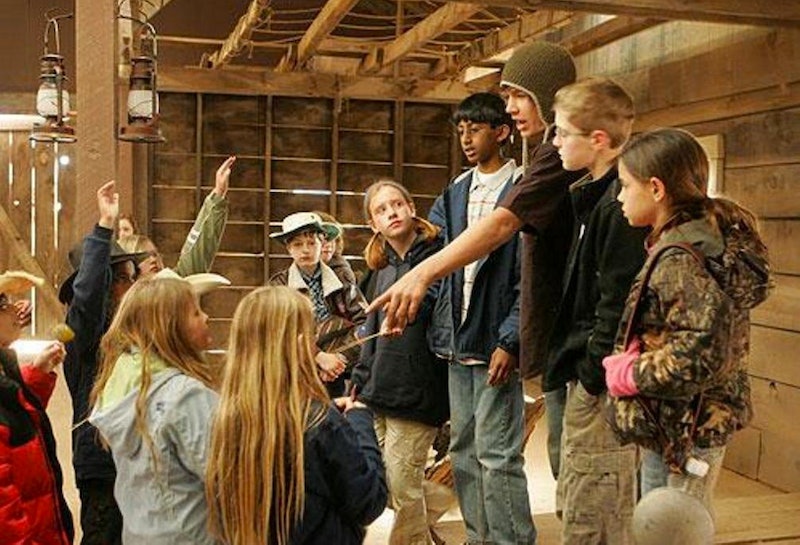 It was a rough time in our great country’s history — it was 2007. And, within the borders of our own United States, a new nation arose. That nation was Kid Nation . The CBS reality show aired only one season before getting axed due to highly questionable legality and a boatload of controversy, but not before it found its way into our hearts and minds forever. The new series that was a mash-up of Lord of the Flies and Nickelodeon's best game show ever, Legends of the Hidden Temple , (that’s a TBT double header right there) sent 40 kids, ages 8-15, into a desert ghost town (former movie set) to build a society from scratch. While Kid Nation creator Tom Forman had intended for the show to lean towards social experimentation and not reality competition, the siren song of Hollywood won the day for higher-ups at CBS. Kid Nation proved to be a strange mix of the two.

You know what rubbernecking is? It’s when you drive slowly past a car crash because your instincts are saying “MUST SEE DESTRUCTION IN PROGRESS." And that’s what it’s like to watch Kid Nation. The entire series is available on YouTube for your viewing pleasure and the experience will be exponentially enhanced if you follow along with HuffPost’s incredible liveblog of the show.

But, while you can't look away, there are plenty of things about Kid Nation that'll force you to think, "WTF, who thought this was a good idea?" And so, here are the most pressing 8 things that make this show totally bonkers.

Let’s start before the start, shall we? As The Smoking Gun reported in 2007, CBS had the parents sign an INSANE waiver before sending their kids off to Bonanza City (LOL, “Bonanza City”). Here are some choice segments:

"I understand that the Program may take place in inherently dangerous travel areas that may expose the Minor and other participants to a variety of unmarked and uncontrollable hazards and conditions that may cause the Minor serious bodily injury, illness or death, including, without limitation: general exposure to extremes of heat and cold; water hazards … crevasses, cliffs, and rock avalanches; encounters with wild or domesticated animals; acts of God (e.g., earthquakes)"

Um, anyone else notice that CBS made someone sign a contract blaming the potential death of their child on GOD?! Dude, if God has nothing better to do than mess around with Kid Nation, liability issues should be the least of our concerns.

WHAT. I mean, I understand they had to cover all their bases, but "failure" seems like a pretty legit thing to complain about. Especially if "failure" means "sry ur kid is dead."

"I understand that if the Minor chooses to enter into an intimate relationship with another participant or any other person ... I hereby assume any and all risks that may be associated with any relationship, including, without limitation, emotional distress, illness, sexually transmitted diseases, HIV, and pregnancy."

THESE ARE CHILDREN. THEY'RE TALKING ABOUT 8-YEAR-OLDS. I mean, the oldest kids would've been starting high school, but that doesn't make this okay at all. How was this not a red flag for parents? Were they coerced? Oh right, I remember now — everyone got sweet ca$h m0ney for this.

2. That Time They Killed a Chicken

In Episode 2, the Town Journal (Harry Potter and the Child Labor Violation) was all “see those chickens you’ve come to love as pets? KILL THEM. SLAY THE BEASTS, CHILDREN.”

Besides being a weird way for the kids to learn about the cycle of life, this ordeal introduced our young heroes to civil disobedience. A few of the kiddos tried to protest the slaughter with a chicken coop lock-in, but they were shut down. DEATH ALWAYS WINS IN THE END, KIDS.

According to the IMDb bio supposedly provided by CBS, “Jonathan Karsh helped develop Kid Nation and serves as the show's host, as well as its supervising producer." So this guy is basically the puppet master of the entire operation? Is he the one writing Ye Olde Pioneer Journal? Where does he sleep? Is that his real face? I HAVE SO MANY QUESTIONS. Following Kid Nation, Karsh moved on to executive produce MTV and TLC series like Catfish: The TV Show and My Teen Is Pregnant and So Am I. Yep, sounds about right.

4. Adults Just Sat Back and Watched the Chaos Unfold

One infamous alleged cause of cancellation for Kid Nation is that a bunch of kids straight up DRANK BLEACH from a soda bottle. What, did Larry the PA leave his bleach cocktail at the root beer saloon and forget to finish it? Will he ever get help for his huge bleach-drinking problem? These are the things that keep me up at night.

5. Actually, the Adults Interfered, but Only to Create More #Drama

In a 2013 Reddit AMA, contestant Michael Thot shed some major light on what actually went on behind the scenes in Bonanza City.

He said, “There was an episode about trash disposal. We had been disposing of trash ourselves efficiently up to that point. They bought trash and dumped it in the town, then told us we had to take care of our ‘massive trash problem.’” OKAY, GROWN-UPS, way to go midlife Grey’s Anatomy on us. And by that I mean put a bomb inside a person because we don’t know what else to do — okay maybe it’s not like Grey’s, but you get the point.

Here’s how producers structured the show: kids are divided into four teams: Red District, Green District, Blue District, and Yellow District. (This was pre-Hunger Games, so the massive franchise is 100 percent based on Kid Nation.) Every week, a “showdown” determined the social class of each team from Upper Class to Merchant Class to Cooks to Laborers.

That’s right, at age 8, if you couldn’t pull a mining sled full of rocks through an obstacle course, you might end up a LOWLY PEASANT. Didn’t find enough tin cans at the bottom of a pig pen filled with beans and also live pigs? TO THE KITCHEN YOU GO!

Now, I can’t be the only one who thinks this is either an extreme capitalist conditioning experiment (#murica) OR a big 'ol communist prank. Like a bunch of KGB agents are high fiving and doing shots somewhere because THIS SHOW IS A THING THAT ACTUALLY AIRED ON AMERICAN TELEVISION.

Oh, how meticulously cast this show was. A reflective Michael confirmed in that AMA:

“They went cherry picking in specific states for specific reality show cliches. You have Greg - asshole farm boy from Nevada. Alex - smart Asian. Sophia - over-educated, charming neurotic. Me - kid with long hair that likes to say hippie-ish things from Seattle… I guess what I'm trying to say is that the people that cast these shows, and the cast members themselves, are exploiting specific imagery and archetypes. In this manner, I think that reality TV says an enormous amount about what we want to look like, and how we want other people to act for our entertainment.”

DAMN, SON. Looks like that show didn’t melt the brains of all contestants as I had previously thought. Keep doing you, Michael.

Anyway, for those strong characters, the show made sure each had a personal servant/sidekick. Asshole Greg had Less-asshole Blaine. Queen Bitch Taylor had Ladies Maid Leila. European Child Model Miglė had her Unthreateningly Cute BFF Natasha. Now, in adult reality shows, these kinds of things happen all the time. But with kids, did anyone think about the psychological repercussions of this? Oh right, they did. It’s in The Contract — to paraphrase, "We might screw your kid up, but whatever."

Taylor was the perfect reality show leading lady. This little monster gave us such gems as “Ugly chickens deserve to die!” and “I’m a beauty queen, I don’t do dishes!” and “Bow before me, you worthless peasants! I’ll steal your kidneys!” (This last statement could not be verified.)

Oh, Taylor. I hope she’s on a beach somewhere, Leila fanning her with a palm frond. Perhaps Greg is her cabana boy. Maybe she rules us all.